The Rise of Private Financing for Entrepreneurs 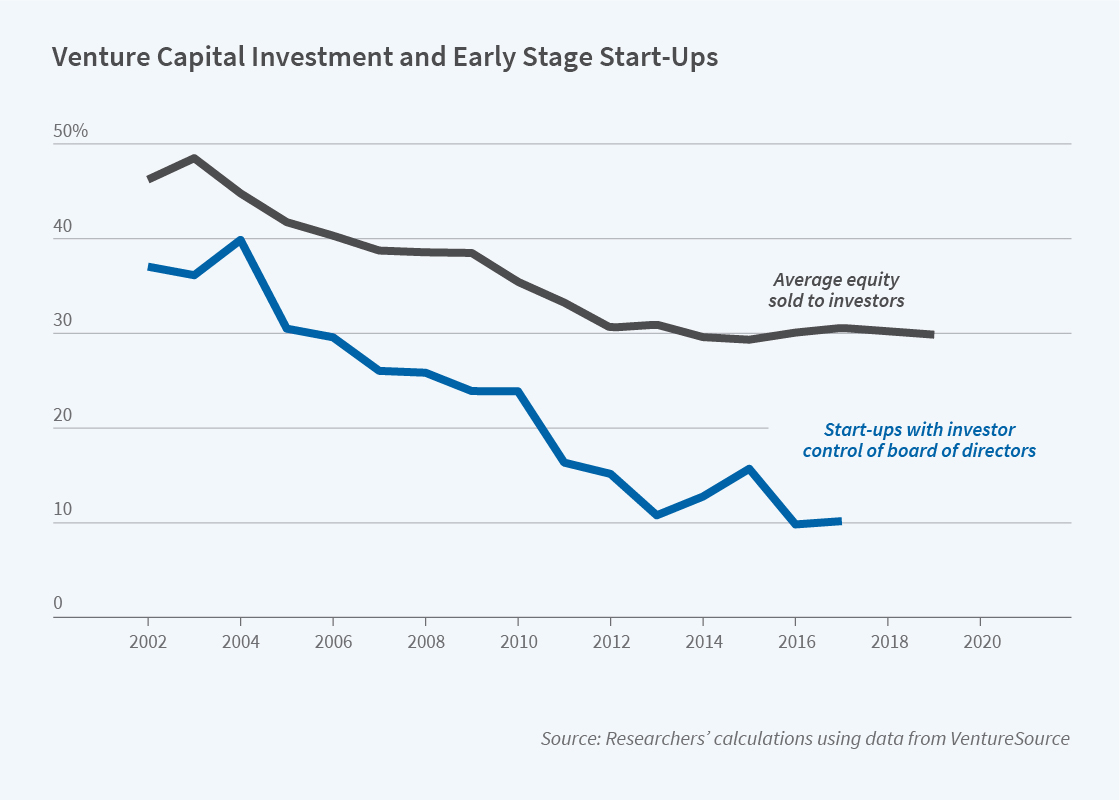 In Private or Public Equity? The Evolving Entrepreneurial Finance Landscape (NBER Working Paper 29532), Michael Ewens and Joan Farre-Mensa survey the changes in the US entrepreneurial finance market over the last two decades. Their study begins by describing the differences between publicly listed and private firms, and then explores how several regulatory, technological, and competitive changes affecting both startups and investors have affected the costs and benefits of going public. The paper emphasizes the growing costs of the disclosures required of public firms, and also observes that major technological changes have reduced the initial capital investment required to start many new companies.

Private entrepreneurial financing has grown rapidly since the turn of the millennium. Capital raised by private, venture capital-backed startups grew from an inflation-adjusted $28.9 billion in 2002 to $118.2 billion in 2019. Since 2017, the amount of private investment in entrepreneurial companies has been greater than the combined amounts raised in initial public offerings (IPOs) by private firms going public and through follow-on offerings by already public firms. In 2002, there were only five private financing rounds in which firms raised more than $99 million. By 2019, there were 189 — compared to 112 IPOs. Private capital also appears to have gotten cheaper. Combined with the lower capital requirements of many young startups, this means that entrepreneurs raising their first round of venture capital now retain 30 percent more equity in their firm and are more likely to control their board of directors than their earlier counterparts. One consequence of this is that a growing number of entrepreneurs are in a position to delay their IPOs even if investors would prefer an earlier exit. As a result, when firms eventually do go public, they tend to be older and to have raised more private capital prior to their IPO.

Growth in the supply of private capital and founders’ increased bargaining power when considering exit opportunities have enabled many startups to grow as private firms, without going public.

The study sheds light on these changes by analyzing the differences between public and private firms and the evolution of these differences over time.  First, public and private firms differ in their communication to potential investors. On the one hand, public firms’ quarterly disclosures mean that there is far more publicly available information about the average public than the average private firm. On the other hand, the requirement that all potential investors in a public firm have access to the same information means that their managers need to trade off the benefits of information disclosure — beyond their mandatory disclosures — with the costs of making the information public and thus available to their competitors. As a result, private firms’ shareholders often gain access to proprietary information that is off-limits to investors in public firms. The growing importance of R&D investments and intangible assets to business success may have increased the disclosure costs faced by public firms, thereby making private firms’ ability to disclose confidential information to selected investors more valuable.

Second, public companies are subject to more stringent regulations than their private counterparts. These include federal regulations such as those emanating from the Sarbanes-Oxley Act, exchange-level regulations, and state regulations such as California’s board of directors diversity requirements. In return, public firms are allowed to sell their shares to the general public, and their shares can then be traded easily on liquid exchanges. As a result, public firms enjoy a lower cost of equity capital and potentially of debt capital as well. The fact that public firms’ shares are more liquid also makes it easier for founders and stock-compensated employees to sell their shares.

Third, over the last quarter century, a number of developments have improved startups’ access to private capital, narrowing the gap between public and private firms. The National Securities Markets Improvement Act of 1996 made it easier for private startups to raise capital from out-of-state investors, and for venture capitalists to raise larger funds. Venture capital funds also have benefited from a sharp increase in allocations to private equity by institutional investors such as higher-education endowments and pension funds.  At the same time, mutual funds and hedge funds — traditional public investors — increasingly include private firms in their investment portfolios as they strive to beat the returns of passively managed index funds. These developments have resulted in a new equilibrium in the entrepreneurial finance market that features more investment of private capital, particularly in late-stage rounds, and seemingly higher private firm valuations alongside more founder-friendly contracts.