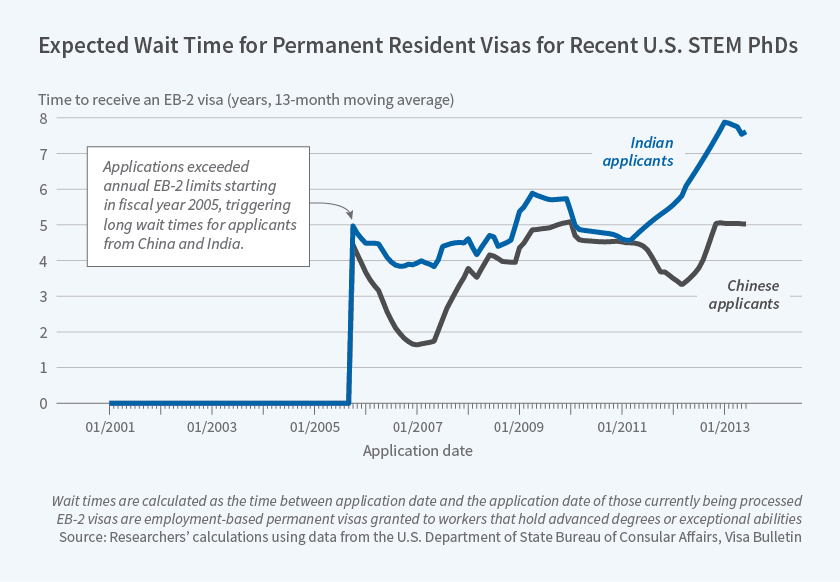 A two-year delay in granting permanent residency reduces by almost 5 percentage points the fraction of Chinese STEM PhDs from U.S. universities who stay.

In some science and engineering fields, foreign students earn most of the PhDs awarded by U.S. universities. Many of these students stay in the United States and work in fields critical to the country's economic competitiveness. China and India are the leading sources of such high-skilled workers.

Since 2005, however, the fraction of Chinese and Indian PhDs who have chosen to stay has declined. In The Impact of Permanent Residency Delays for STEM PhDs: Who Leaves and Why (NBER Working Paper 25175) Shulamit Kahn and Megan MacGarvie link this trend to U.S. immigration laws. Limits on the number of green cards for PhDs from any single nation cause applications for permanent residency visas to be delayed, and the longer that delay, the less likely foreign PhDs in STEM fields are to stay. The researchers identify a second reason for the trend: increases in scientific output and in support for science in the graduates' home countries.

Every year, many U.S. companies try to attract PhD STEM workers from abroad by sponsoring them for permanent residency. The U.S. offers 40,040 EB-2 visas — green cards — annually for foreigners holding advanced degrees or with exceptional abilities. Country quotas apply once all the employment-based green cards have been applied for. Since late 2005, employment-based green cards have been fully subscribed, which means that these quotas are operative and that no more than 25,620 visas can be available to citizens of any single country. When a nation reaches its quota, subsequent applicants are placed in a queue, which delays the granting of a visa. Only nationals of China and India have been affected, and they have been limited for that entire period.

The researchers study 16,215 temporary residents who earned PhDs in 2001 or later and who participated in National Science Foundation surveys of STEM PhDs from 2010 to 2015. More than two-thirds of these highly educated workers are still in the country. Of those, 14 percent reported becoming naturalized citizens and 53 percent reported that they were permanent residents. Most of the rest were still temporary residents.

The longer the delay of citizenship for temporary residents, the less likely they are to remain in the U.S., when compared to otherwise similar doctoral recipients of foreign origin. For Indian PhDs, the relative stay rate is almost 9 percentage points lower for those facing delays of at least 5.5 years. For Chinese graduates, the relative stay rate declines by 2.4 percentage points for every year of delay. Almost all STEM PhDs who leave the U.S. because of visa delays return home, rather than moving to a third country.

Although visa delays are important, other factors may also have influenced Chinese and Indian stay rates. For example, in 2011 China started the "Thousand Talents Program," aiming to bring back STEM experts. The researchers exclude scientists who might be affected by this program, and still find similar results about the effects of visa policy on stay rates in the U.S. They do find, however, a substantial effect from the strengthening of a home country's scientific base. For every 1 percent rise in citations per scientific article — a measure of national scientific prowess — the probability of remaining in the U.S. falls by 0.16 percentage points.

The Impact of Permanent Residency Delays for STEM PhDs: Who leaves and Why