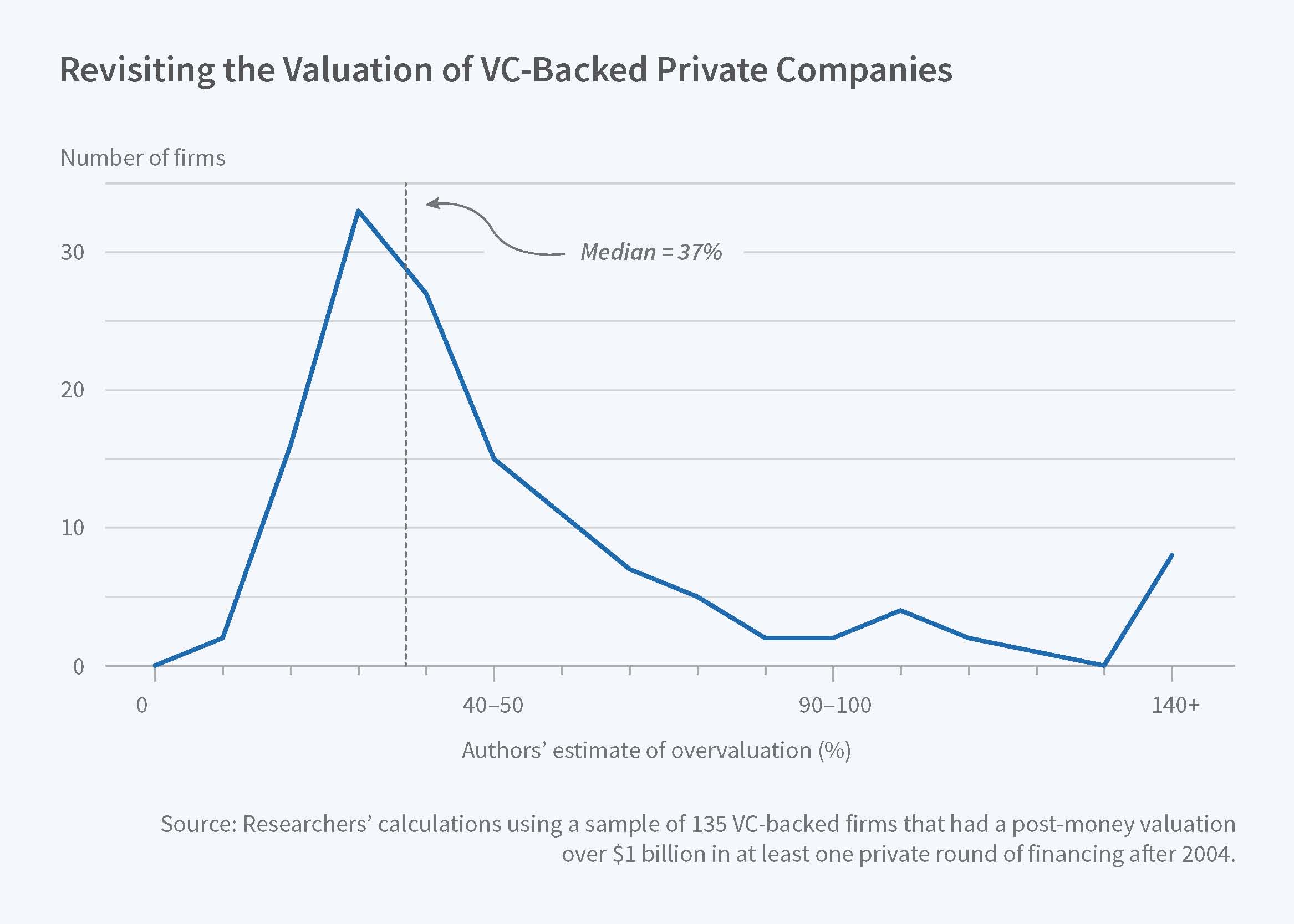 A frequently used measure of the value of a private venture-backed company can overstate the company's worth because prices and conditions vary in successive rounds of financing.

Private companies worth more than $1 billion — so-called "unicorns" — are frequently overvalued, according to a study of 135 such firms. Fast-growing firms are always hard to value, but the largest challenge in valuing these firms is their complex financial structure. Shares in such companies differ in important ways from common stock and even from publicly traded preferred equity, and there can be significant differences between the shares offered in different financing rounds.

These financial structures and their valuation implications can be confusing and are grossly misunderstood not just by outsiders, but even by sophisticated insiders," William Gornall and Ilya A. Strebulaev write in Squaring Venture Capital Valuations with Reality (NBER Working Paper No. 23895). Their preferred estimates suggest that, on average, reported values overstate valuations by about 50 percent.

The researchers illustrate the issues involved by considering the valuation and funding history of Square Inc., a payment technology firm. In October 2014, the firm raised $150 million by selling 9.7 million Series E Preferred Shares to investors for $15.46 apiece. If the company did well, the shares paid off the same as common shares. But if the company failed or was acquired, Series E investors were still guaranteed to get at least $15.46; in the case of an initial public offering, they'd get a minimum $18.56. The company had already sold Series A, B-1, B-2, C, and D preferred shares, each with different cash-flow, liquidation, control, and voting rights.

After the Series E round, Square got a "post-money valuation" — the venture capital industry's main metric for determining company value — of $6 billion (388 million shares multiplied by $15.46). The researchers point out that this simple calculation did not recognize that all shares were not created equal. They develop a model to account for these differences and conclude that a more realistic total value would have been $2.2 billion. A year later, the company went public at $9 a share, far below the $15.46 used in the post-money valuation. The researchers are not suggesting that the valuation of any share class is incorrect, just that the use of the price of a single share class to value all of the outstanding shares can be inappropriate when trying to calculate a firm's aggregate valuation.

Failure to account for heterogeneity in outstanding share characteristics is common, and may lead to systematic overstatements of the total value of a firm's equity. The researchers consider 135 firms that have been reported as worth more than $1 billion, and they conclude that on average, the reported valuation is 50 percent greater than the estimate from their modeling. Their analysis suggests that 65 of the 135 firms were worth less than $1 billion.

The researchers point out that even if a company's business prospects are falling, if later share classes are issued with more generous terms for investors, it is possible that the reported share price will rise over time and result in increases in the firm's post-money valuation.

Developing accurate measures of the value of venture-capital-backed firms may be increasingly important as new classes of investors begin holding shares in these companies. Mutual funds have begun investing in these firms, and even individual investors are participating in these firms through third-party marketplaces. While still a small fraction of fund assets, mutual-fund purchases of unicorns have soared tenfold in three years.