How Do Venture Capitalists Make Decisions? 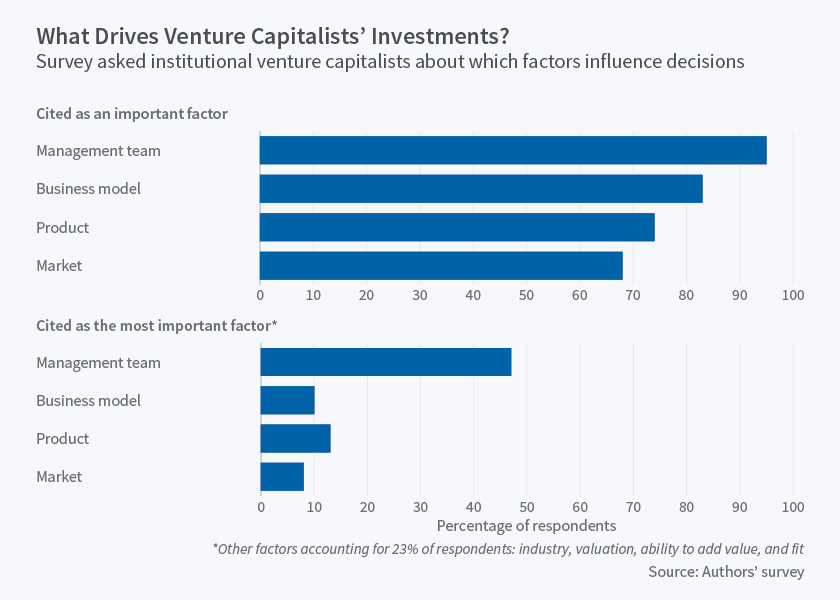 VCs said that deal flow, deal selection, and VC value-add are all important contributors to value creation. They considered deal selection most important.

In How Do Venture Capitalists Make Decisions? (NBER Working Paper 22587), Paul Gompers, William Gornall, Steven N. Kaplan, and Ilya A. Strebulaev report on the results of a survey of 885 institutional venture capitalists (VCs) conducted between November 2015 and March 2016. The survey asked detailed questions covering business practices. Most respondents were graduates of top MBA programs or Kauffman Fellows. Some were recruited from a list of individual members of the National Venture Capital Association and the VentureSource database. Eighty-two percent of respondents were partners in their firms.

The researchers found that deal flow, deal selection, and VC value-add are all important contributors to value creation. Among these, deal selection was considered the most important. VCs view the quality of the management team as more important than the business model, product, or market, both in selecting deals and in deal success. Managerial ability, industry experience, and passion were prized qualities for management team selection.

Respondents indicated that their firms discovered or sourced deals primarily through their networks. Over 30 percent of deals were generated through "professional networks," 30 percent were "proactively self-generated," 20 percent were referred by other investors, 8 percent came from a portfolio company. Only 10 percent came inbound from company management teams. The median firm considered 100 deals in a year for every deal it closed or invested in. Firms specializing in information technology considered 151 deals for each investment made; those specializing in health care considered only 78. Deals for early startups that generated an offer were more likely to close than those for later-stage companies with longer track records.

More than 90 percent of respondents considered a company's management team an important factor in the success or failure of their investments. Over 55 percent of respondents considered the team the most important factor. After they invested, venture capital firms offered services such as strategic guidance (87 percent), connections to investors (72 percent), connections to customers (69 percent), operational guidance (65 percent), hiring board members (58 percent), and hiring employees (46 percent). Respondents reported little flexibility about a number of dimensions of corporate structure, including liquidation preferences, vesting rules, anti-dilution protection, and board control.

How Do Venture Capitalists Make Decisions?