The Earnings Gap between Black and White Men 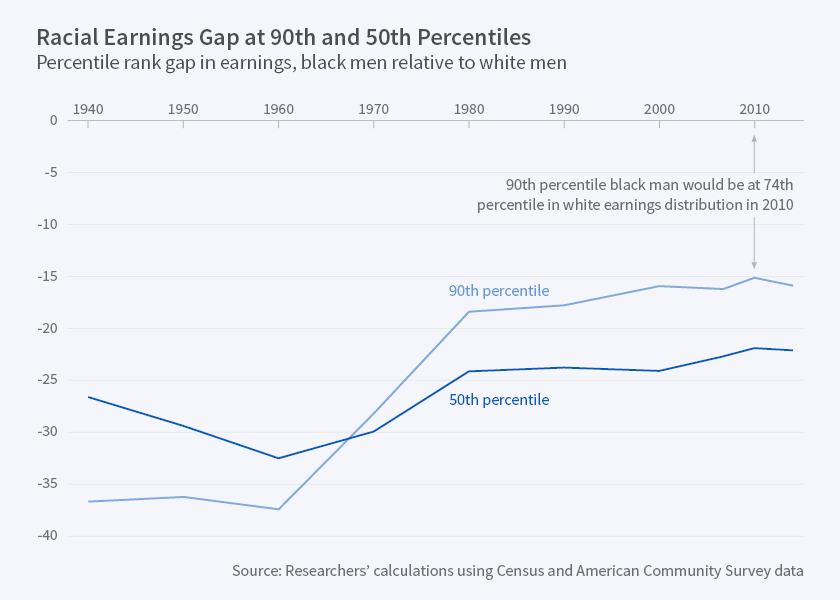 Over the past 75 years, the racial gap in economic rank has narrowed sharply among men at the top of the earnings ladder but changed very little among those at the middle and bottom.

Since the end of slavery a century and a half ago, differences between the earnings of black and white Americans have been a reality of the U.S. labor market. Among working men, this gap narrowed sharply between 1940 and 1970 and has remained largely stable ever since. In Divergent Paths: Structural Change, Economic Rank, and the Evolution of Black-White Earnings Differences, 1940-2014, (NBER Working Paper 22797), Patrick Bayer and Kerwin Kofi Charles point out that focusing only on those who are employed fails to account for the growing numbers of men who are not working for a number of reasons. This group includes those who are unemployed, disabled, or no longer searching for work, as well as the rising number of individuals who are incarcerated.

Among working men, "the median earnings gap between blacks and white fell by almost 60 percent from 1940 to 1980 (with large decreases in the 1940s and 1960s) but has been essentially flat ever since, remaining in the 35-40 percent range in every sample from 1980-2014," the researchers report. But when they consider the entire population of men, they find that the earnings gap has actually widened substantially in recent decades. In 2010, the gap in the population as a whole was comparable to that in 1950.

Their analysis, which focuses on the black-white earnings differences among prime-aged men from 1940 through the Great Recession, "points to the incredible lack of progress and, in many cases, regress in closing the gaps in labor market outcomes for black and white men."

The racial earnings gap around the median narrowed from 1940-70, due largely to broad economic forces which reduced the income disparities among all workers. But since then, the relative gains made by low-skilled blacks through improved education have been countered by the growing overall connection between education and economic rank, the researchers find. "Racial convergence in educational attainment would have led to strong positional gains for black men at the median and below, except that these men faced strong structural headwinds from the simultaneously rising returns to education, both in terms of wages and in the probability of employment," the researchers find.

By contrast, high-skilled black men have moved closer to their white counterparts in income, which the researchers suggest has been due to more-equal access to quality higher education and high-skilled occupations.

"While the entire economy has experienced a marked increase in earnings inequality, this increase has been even more dramatic for black men," the researchers find, "with those at the top continuing to make clear gains within the earnings distribution, and those at the bottom being especially harmed by the era of mass incarceration and the failing job market for men with low skills." The impact of rising incarceration is particularly striking: The incarceration rate tripled for black men between 1980 and 2010, from 2.6 percent to 8.3 percent of the population. The rate quintupled for white men, but remained much lower, at 1.5 percent of the population.

The researchers conclude that education "has played a subtle but extremely important role in the evolution of the racial earnings gap," both fueling and stalling progress.