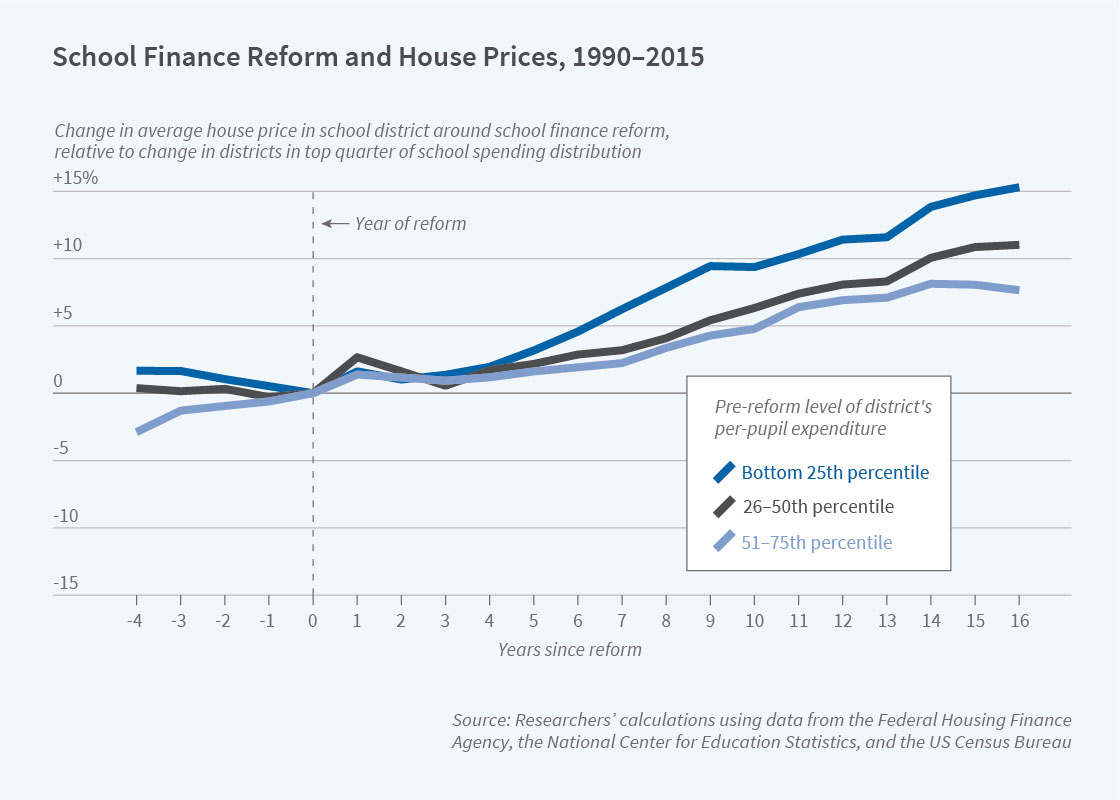 A 1 percent increase in spending on teacher salaries increases house prices by nearly 2 percent, while increased spending on capital projects has little or no effect.

House prices can provide a lens for studying the extent to which households value public school spending and whether such funding is set at an efficient level. In A National Study of School Spending and House Prices (NBER Working Paper 28255), Patrick Bayer, Peter Q. Blair, and Kenneth Whaley conclude that, starting from current levels, increases in spending on teachers’ salaries are associated with higher house prices.

The researchers study changes in local school spending and taxation that result from court-ordered school finance reforms over the 1990–2015 period. They match information on the change in school spending with information on local house prices. House prices are measured using local “constant quality house” price indices that are constructed by the Federal Housing Finance Agency. This approach allows the researchers to separate state and federal school support from funding that is paid for with local taxes. It also allows the researchers to consider a nationwide sample of tax reforms and price changes and provides them with a source of variation in school spending that is not determined by local preferences for schools, or by other factors that might confound the effect of spending changes on house values. By focusing on this source of variation, the researchers are able to measure the causal impact of school spending.

The researchers find that increases in state and federal school funding are associated with higher house prices, implying that prospective home buyers value spending on schools. Identifying the effect of school spending financed by local taxes on house prices is more challenging, since local tax and spending levels are highly correlated with the socioeconomic composition of the district and with local economic conditions. To overcome this confounding relationship, the researchers focus on tax and spending changes that occur as part of statewide school finance reforms that discourage tax-financed spending in high-spending districts and encourage such spending in low-spending districts. They point out that the effects of such financing reforms can take several years to manifest in spending patterns, and can affect spending for a long time. Their analysis explores the impact of school finance reform on house prices over periods as long as 15 years.

The study finds that the effect of local school spending on house prices depends on how the money is spent. A 1 percent increase in spending on teacher salaries increases house prices by 2 percent, suggesting that house buyers value the increase in either the number of teachers hired, which might reduce class size, or teachers’ average salary, which might improve teacher quality.

In contrast, locally financed spending on capital projects is associated with lower house prices, which suggests that house buyers do not see such projects as generating substantial benefits. The fact that capital expenditures are typically funded by issuing bonds, which place future property tax burdens on homeowners, may be related to the decline in prices.

The researchers conclude that in many locations, homeowners would value increased spending on teachers’ salaries, and that this valuation would be reflected in higher house prices. They note that their findings also shed light on the broad question of whether current levels of public spending are set efficiently.

Are We Spending Enough on Teachers in the U.S.?