The Value of Brownfield Remediation 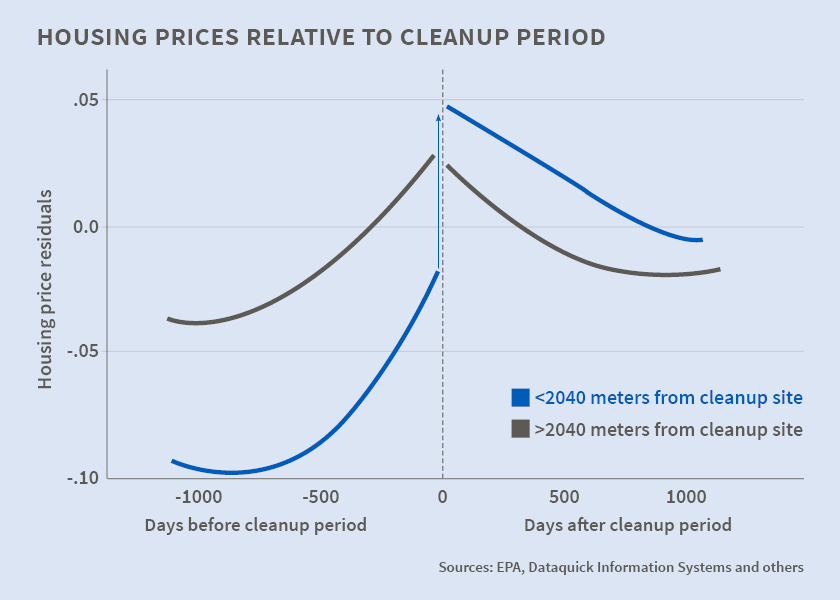 In the vast majority of the 51 cleanup sites in the United States, total economic benefits exceed cleanup costs by an order of magnitude.

Revitalizing contaminated land is a costly process and for sites known as brownfields, where health hazards are low, it is unclear that the health benefits of remediation outweigh the costs. However, even though these sites may not be especially toxic, their oftentimes poor aesthetic quality, combined with their need for special treatment in order to be redeveloped, causes the surrounding area to be an undesirable place to live or work. Thus benefits of revitalization also include economic development that results from making brownfields productive and attractive so that the surrounding area becomes more desirable.

In The Value of Brownfield Remediation (NBER Working Paper No. 20296), Kevin Haninger, Lala Ma, and Christopher Timmins use quasi-experimental approaches to estimate the benefits of brownfield cleanup through its effect on nearby property values. Using a high-resolution, high-frequency housing dataset combined with Environmental Protection Agency (EPA) data, they provide the first nationwide analysis of the EPA Brownfields Program.

Recovering welfare estimates for brownfield cleanup from property-value changes over time may prove challenging if there is substantial neighborhood turnover following remediation. In this case, if resident preferences for brownfield remediation before cleanup differ substantially from that of new residents moving in after cleanup, the capitalization of changes in environmental quality into housing prices over time does not measure the willingness to pay of either group. Instead, the authors propose a difference-in-differences nearest-neighbor matching procedure that does not require any comparisons over time. In particular, they compare price differences of houses that are "treated" with cleanup with those that are not, based on a property's location in adjacent neighborhoods around sites that were cleaned, to the same differences in prices of houses near sites that were not cleaned. Each house near cleaned sites is matched to its most-similar counterpart near untreated sites based on site, house, and neighborhood characteristics.

The results suggest that the cleanups conducted under the Brownfields Program yield a large, statistically significant positive effect, but that effect is highly localized. The rise in housing values that can be attributed to brownfield remediation ranges from 5 to 15 percent, depending on the criteria specified by the researchers. These numbers can be interpreted as a measure of willingness to pay for remediation. Using their more conservative results, the authors conclude that, in the vast majority of the 51 cleanup sites in the United States, the total economic benefits exceed the cleanup costs by an order of magnitude.

The Value of Brownfield Remediation