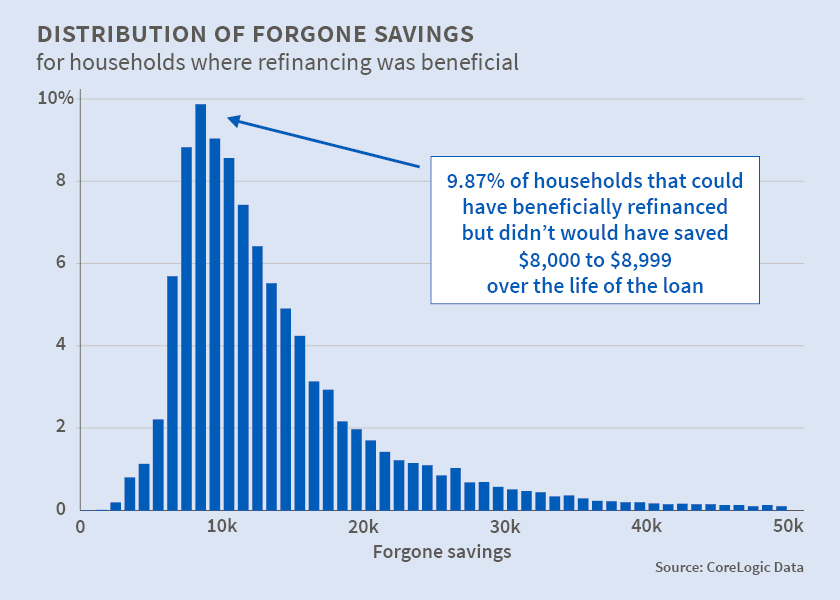 As of December 2010, approximately 20 percent of households with mortgages could have refinanced profitably but did not do so.

Buying and financing a house is one of the most important financial decisions a household makes. It can have substantial long-term consequences for household wealth accumulation. In the United States, where housing equity makes up almost two thirds of the median household's total wealth, public policies have been crafted to encourage home ownership and to help households finance and refinance home mortgages. The impact of these policies hinges on the decisions that households make.

Households that fail to refinance when interest rates decline can lose out on tens of thousands of dollars in savings. For example, a household with a 30-year, fixed-rate mortgage of $200,000 at an interest rate of 6.5 percent that refinances when rates fall to 4.5 percent will save over $80,000 in interest payments over the life of the loan, even after accounting for typical refinancing costs. With long-term mortgage rates at roughly 3.35 percent, this same household would save roughly $130,000 over the life of the loan by refinancing. But in spite of these potential savings, many households do not refinance when interest rates decline.

In Failure to Refinance (NBER Working Paper No. 20401), Benjamin J. Keys, Devin G. Pope, and Jaren C. Pope provide empirical evidence that many households in the U.S. fail to refinance, and they approximate the magnitude of forgone interest savings. The analysis utilizes a nationally representative sample of approximately one million single-family residential mortgages that were active in December 2010. These data include information about the origination characteristics of each loan, the current balance, second liens, payment history, and interest rate being paid. Given these data, the authors calculate how many households would save money over the life of the loan if they were to refinance their mortgages at the prevailing interest rate while adjusting for tax implications and probability of the household moving.

A key challenge in determining whether households are failing to refinance is knowing whether a household had the option to refinance - especially given the tightening banking standards over this time period. The authors take advantage of the rich data environment to make reasonable assumptions about the ability of individuals to refinance based on various factors (e.g. loan-to-value ratios) and provide evidence of robustness to the assumptions made.

In 2009, the Federal Housing Finance Agency (FHFA) and the Department of the Treasury announced a refinancing program entitled "Home Affordable Refinance Program" (HARP). This program enabled homeowners who were current on their federally guaranteed mortgage and met other conditions of the loan to refinance to a lower interest rate even if they had little or no equity in their homes. When HARP was announced, FHFA and the Treasury estimated that four to five million borrowers whose mortgages were backed by Fannie Mae and Freddie Mac could take advantage of it. By September 2011, however, fewer than a million mortgagors had refinanced under HARP. Although modifications to the program have resulted in more households taking up refinance offers, the overall take-up rate remains low.

These results raise questions about why borrowers do not take advantage of refinancing opportunities that would substantially lower their interest payments. The authors suggest that there may be information barriers regarding potential benefits and costs of refinancing, and that expanding and developing partnerships with certified housing counseling agencies to offer more-targeted and in-depth workshops and counseling surrounding the refinancing decision could alleviate barriers for people in need of financial education.

The authors also suggest that psychological factors, such as procrastination, mistrust, and the inability to understand complex decisions, may be barriers to refinancing.