The Mental Health Impact of Fatal Shootings at American Schools 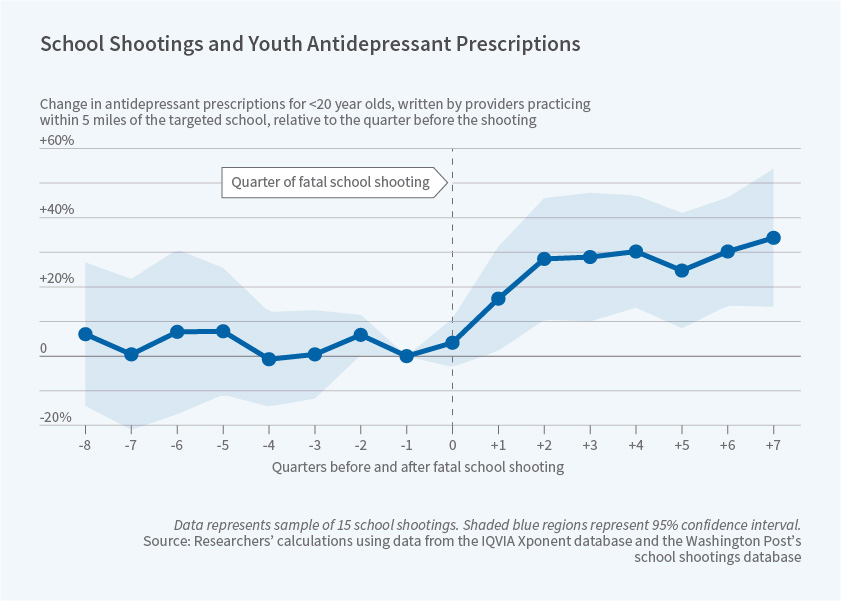 In the two years following a fatal shooting, antidepressant prescriptions for young people living near the affected school were 21 percent higher than in areas farther away.

Over 140 people have died in more than 230 shootings at US primary and secondary schools since the 1999 shooting at Colorado’s Columbine High School. Some 240,000 children have been present on school grounds during a shooting. These shootings have attracted intense public attention but little research on how exposure affects survivors.

In Local Exposure to School Shootings and Youth Antidepressant Use (NBER Working Paper 26563), Maya Rossin-Slater, Molly Schnell, Hannes Schwandt, Sam Trejo, and Lindsey Uniat use data on antidepressant prescriptions to analyze the effects of 44 school shootings that occurred between January 2008 and April 2013. They find large and persistent impacts on the antidepressant use of the local youth who were exposed to fatal school shootings during this time period.

The researchers found that, compared to the two years before a fatal school shooting, the increase in the number of antidepressant prescriptions written for young people in the two years after the event by providers located within five miles of a shooting-affected school was 21.3 percent higher than the change in the number written by providers located 10 to 15 miles away. When the researchers extended the observation window to three years after the shooting, they found a 24.5 percent increase in prescriptions. They did not find any effects when shootings did not result in deaths, on antidepressant use among adults in areas where a fatal school shooting occurred, or on opioid prescriptions written for youth.

The researchers conclude that their findings “demonstrate that local exposure to fatal school shootings leads to significant and persistent increases in antidepressant use among American youth,” while also noting that these effects “are unlikely to capture the full mental health consequences of these events.”

Local Exposure to School Shootings and Youth Antidepressant Use