When Mom and Dad Both Can Get Paid Family Leave 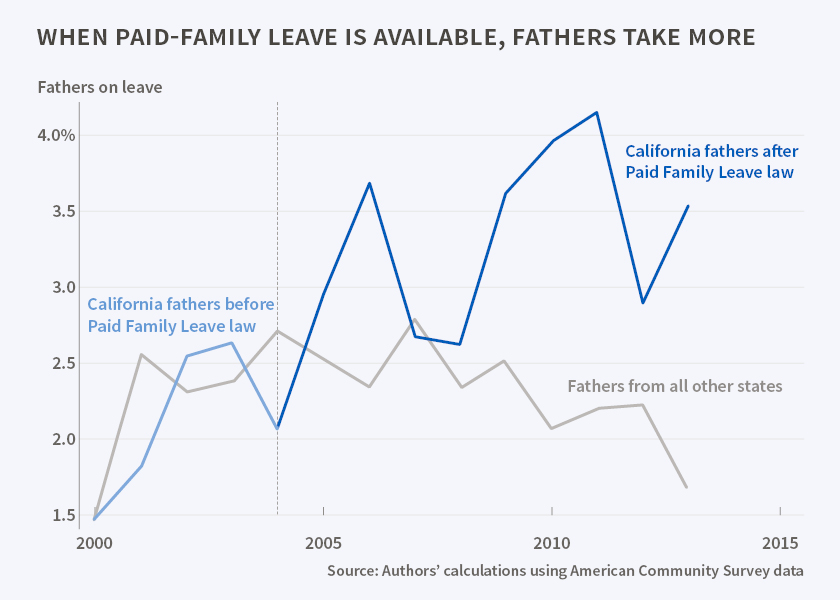 California's first-in-nation provision of paid family leave led to a substantial increase in fathers taking leave, most often for sons and first-borns.

California was the first U.S. state to offer paid family leave to new parents. Its program, started in 2004, offers up to six weeks of paid leave, replacing 55 percent of wages up to a maximum benefit of $1,104 per week in 2015. The program also funds leave to care for a parent, child, spouse, or registered domestic partner with a serious health condition. Most private sector workers are eligible. Leave may be taken all at once or in small increments.

In Paid Family Leave, Fathers' Leave-Taking and Leave-Sharing in Dual-Earner Households (NBER Working Paper 21747), Ann Bartel, Maya Rossin-Slater, Christopher Ruhm, Jenna Stearns, and Jane Waldfogel find that, in dual-income households, the use of paid family leave increased. Father-only leave-taking rose by nearly 50 percent and joint leave-taking — both parents on leave at the same time — rose by 28 percent. The effects for fathers were much larger for sons than daughters, and almost entirely driven by fathers of first-born children and fathers in occupations with a high share of female workers.

The researchers estimate that fathers on average responded to the availability of paid leave by taking an additional 2.4 days off, from a baseline of 5.2 days of leave before the program began. In 2005, 19.6 percent of paid leave claims were filed by men. In 2013, men filed 30 percent of claims.

The leave estimates were based on data from the 2000 Census and the 2000–2013 American Community Survey (ACS). Both data sets ask whether individuals are "temporarily absent from work during some portion of the week" in the week prior to the interview. Data limitations prevent the authors from determining whether a survey respondent was eligible for paid leave; the estimates assume that all employed fathers in California were eligible. The findings may underestimate the true effects of the program if a substantial fraction of employed fathers was not eligible.

The researchers conclude that a gender-neutral paid family leave policy may "have important implications for addressing the gender wage gap.... The unequal burden faced by women in the home, combined with a lack of flexibility in work schedules at most jobs, may be an important explanation for why the gender wage gap still exists...." and paid family leave may "therefore be seen as one way to promote gender equality."