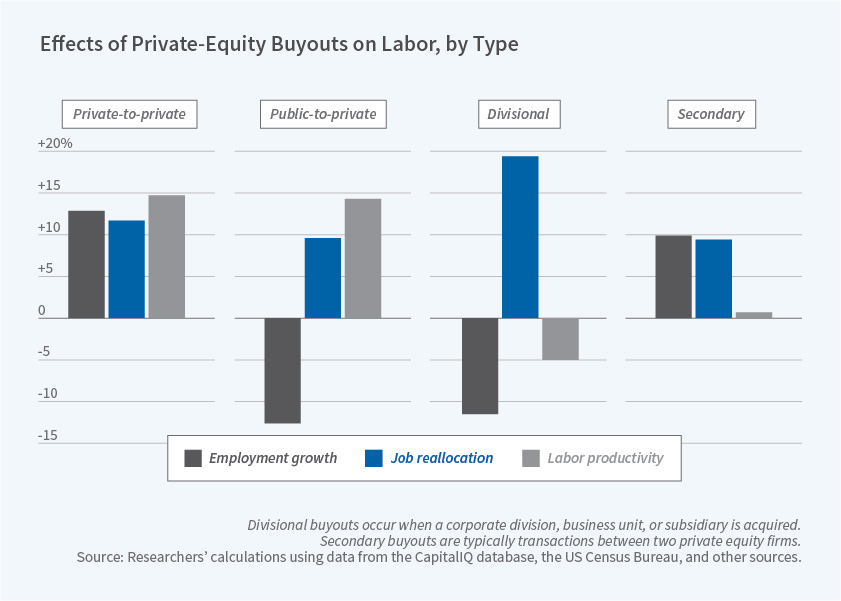 Outcomes differ systematically across buyout type and with macroeconomic and credit conditions at the time of and after the buyout.

Champions of private equity (PE) buyouts claim that such deals are engines of efficiency that create value by concentrating ownership of target firms, levering capital structures, and introducing high-powered financial incentives. Critics argue that these transactions are often associated with reductions in employment and wages, and with a greater risk of firm bankruptcy. Steven J. Davis, John C. Haltiwanger, Kyle Handley, Ben Lipsius, Josh Lerner, and Javier Miranda investigate these competing viewpoints in The Economic Effects of Private Equity Buyouts (NBER Working Paper 26371). They find that the effects vary widely depending on whether the target firm is publicly or privately held, and on the external economic conditions that coincide with, and follow, the buyout.

The researchers reviewed about 9,800 PE buyouts of US firms that took place between 1980 and 2013, a period characterized by deep swings in credit market tightness and GDP growth. By analyzing US Census Bureau data on firm- and establishment-level outcomes, they estimated the buyouts’ effects on employment, job reallocation, labor productivity, and compensation per worker. They found striking heterogeneity across buyouts, as well as several distinct patterns.

In the first two years after the buyout, relative to a control sample, employment rose 13 percent at target firms that were previously under private ownership (private-to-private buyouts) and 10 percent in secondary buyouts (when one PE entity was sold to another). In contrast, employment fell by 13 percent in buyouts of publicly listed firms (public-to-private deals) and by 16 percent in buyouts of a division of a company. Once again, these changes are relative to a sample of control firms.

The pace of intra-firm job reallocation at target firms rose relative to control firms following a buyout. This pattern held across all buyout types, much of it reflecting greater acquisition and divestiture activity by these firms. A post-buyout widening of credit spreads or a slowdown in GDP growth lowered employment growth at targets and sharply curtailed productivity gains in public-to-private and divisional buyouts.

Labor productivity rose by an average of 8 percent at target firms relative to controls, a striking impact given that targets tend to be mature firms in mature industries. However, compensation per worker fell by 1.7 percent at target firms after buyouts, largely erasing pre-buyout higher wages at targets relative to controls. Wage effects also differed greatly by buyout type.

Credit conditions were associated with buyout performance. Buyouts executed amidst easy credit conditions had smaller productivity gains than those completed when credit was tight. When credit is easily available, PE groups may select or structure buyouts to deliver private returns via financial engineering rather than operating improvements.

Because of the significant heterogeneity across buyout types, the researchers conclude that there is little reason to treat all buyouts as homogeneous in their effects on jobs, reallocation, wages, and productivity. In particular, while private-to-private buyouts appear to create value by relaxing financial constraints and improving management practices, public-to-private buyouts, which have been shown elsewhere to involve greater leverage and bankruptcy risk, involve substantial job cuts. This finding has important implications for buyout-related public policies, and particularly casts doubt on the efficacy of “one-size-fits-all” policies that address private equity.