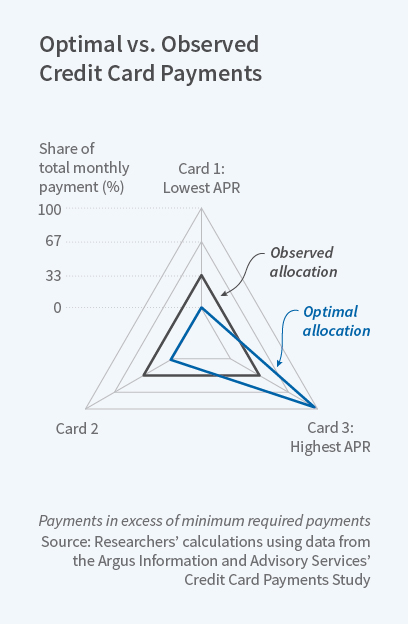 Credit card borrowers typically do not repay their debts in the optimal way, if one assumes that their goal is to minimize their total interest costs. Instead of first tackling the loan with the highest interest rate, they split repayments to match the ratio of their card payments to the ratio of their card balances, according to How Do Individuals Repay Their Debt? The Balance-Matching Heuristic (NBER Working Paper No. 24161).

The cheapest way to pay down outstanding debt on multiple credit cards is to pay the minimum due on all cards and then to pay as much as possible on the card carrying the highest interest rate. If that card's balance is fully paid, the borrower can then move on to the card with the next highest rate. Researchers John Gathergood, Neale Mahoney, Neil Stewart, and Joerg Weber base their findings on credit card repayments of 1.4 million individuals over a two-year period — a dataset that allows them to link multiple cards to a single user. The researchers calculate that for two-card holders, the interest-minimizing strategy involves making 97.1 percent of "excess" payments — those above the required minimums — on the borrower's highest-interest debt. But that's not what most consumers do.

When studying borrowers with just two cards, the researchers find that borrowers only allocate 51.5 percent of their excess payments to the higher rate card, even though the average difference in the cards' annual percentage rates (APRs) is 6.3 percentage points. That allocation is barely distinguishable from the 50-50 split that would occur if the borrowers ignored the respective interest rates on the two cards.

Why are borrowers apparently insensitive to the difference in interest rates? One explanation might be that the potential savings aren't worth the time and effort needed to optimize their repayment. But the researchers find that the misallocation persists even if the APR difference is wide (in some cases, 15 percentage points) or if the payments are large — up to £800 (about $1,100 at current exchange rates) per month. So the "optimizing is too costly" explanation doesn't seem to fit.

Instead, individuals appear to follow a balance-matching heuristic, matching the ratio of their card payments to the ratio of their card balances. The researchers evaluate this heuristic against a set of other possibilities, including a "snowballing" rule where the lowest balance is paid down first. They find that balance-matching explains more of observed behavior than any other heuristic — more than half of the predictable variation in user repayments.

The researchers write that "the credit card repayment decision is an ideal laboratory for studying borrowing because behavior that minimizes interest charges — what we refer to as optimal behavior — can be clearly defined." Compared with choosing a mortgage, where risk preferences could play a role in whether an individual picks a fixed- or adjustable-rate loan, or even credit card spending where rewards programs could alter behavior, the decisions on how to repay credit card debt do not require explicit modeling of preferences.

How Do Individuals Repay Their Debt? The Balance-Matching Heuristic