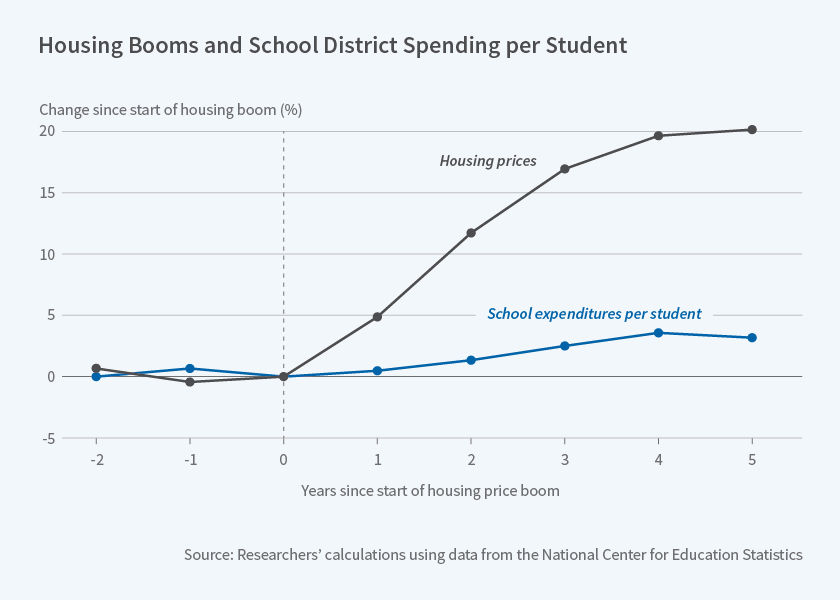 From 1995 to 2007, average real house prices in the United States rose 95 percent. Because property tax revenues are often linked to home values, expenditure per pupil in public schools also rose, by about 17 percent.

Matthew Davis and Fernando V. Ferreira test the hypothesis that surging home prices result in more spending on education. In Housing Disease and Public School Finances (NBER Working Paper No. 24140), they find that housing booms accounted for half of the rise in public school spending during the 1990s and 2000s. This was a period when median public school spending rose by 41 percent in real terms, from $9,131 per student in 1990 to $12,907 in fiscal year 2008-09.

Housing markets are cyclical and the magnitude of those cycles, measured by changes in house prices from peak to trough, have increased over time. Moreover, the last housing cycle was characterized by changes in prices that were not linked to fundamental factors, such as broad increases in wages. When such booms affect a labor market area — much larger than an individual school district — and are unrelated to other local factors that may influence prices, it is possible for researchers to examine how fluctuations in home prices impact school finances.

Rising home prices during a boom raise local property tax revenue unless the local government cuts tax rates to offset the higher home prices. If the jurisdiction spends part of this revenue on its schools, the house price run-up will translate into higher school spending. This represents an important spillover from housing markets to local government finances.

The researchers use school district finance data from the National Center for Education Statistics and home price data from CoreLogic to estimate that house- price-to-school spending linkage. They focus on the period between the mid-1990s and the mid-2000s, when housing markets were beginning to boom at different times around the country.

For the typical school district in the data sample, home prices are 20.1 percent higher five years after the onset of a housing boom. School expenditures also increase, but only with a one- or two-year lag compared to housing prices. By the fourth year of the boom, school expenditures are 3.3 percent higher. Using these figures, the researchers estimate that a 1 percent rise in home prices increases school expenditures by about 0.18 percent. Overall, from 1995 to 2007, average real house prices in the dataset analyzed by the researchers rose 95 percent. This was associated with an increase in expenditure per pupil of about 17 percent, roughly half of the rise in school spending per student in that period.

The researchers also investigate how those additional resources were used by school districts. Four years after a housing boom, school capital expenditures increased by 17 percent, teacher salaries by 2.9 percent, and teacher benefits by 3.7 percent. Interestingly, bureaucratic costs, such as administrator salaries, did not increase following housing booms.