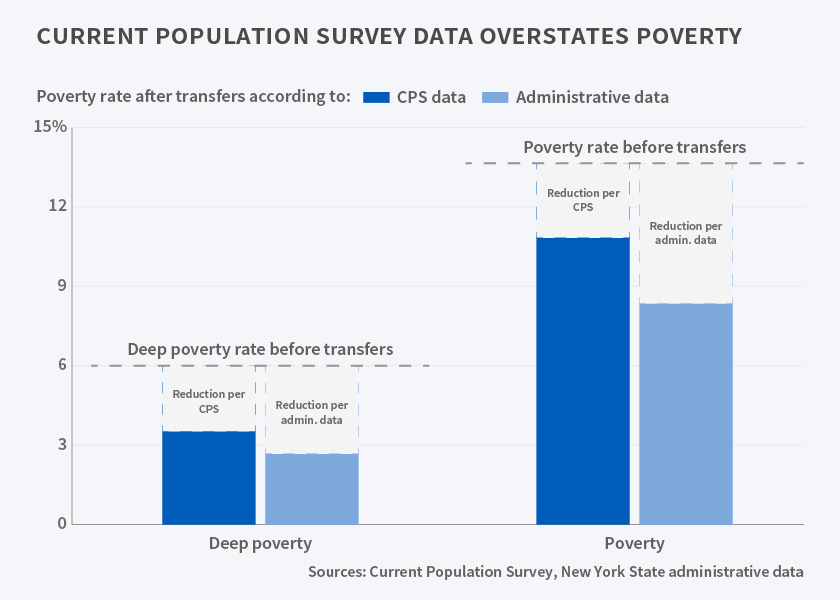 Researchers find underreporting of transfers in federal survey leads to overstating of poverty and inequality.

Researchers and policymakers have long relied upon survey data, especially from the Current Population Survey (CPS), as a critical input for measuring unemployment and for analyzing the effects of government policies, such as anti-poverty initiatives.

In Using Linked Survey and Administrative Data to Better Measure Income: Implications for Poverty, Program Effectiveness, and Holes in the Safety Net (NBER Working Paper 21676), Bruce D. Meyer and Nikolas Mittag compare government survey figures to administrative records of key welfare programs in New York State. Their findings raise questions about the accuracy of survey data on household incomes. They find widespread misreporting and other survey errors that ultimately overstate the incidence of poverty, the degree of income inequality, and the number of people falling through the safety net in the United States.

In recent years, an increasing number of researchers have expressed concern about the overall quality of household survey data from the CPS, which is conducted by the Bureau of the Census for the Bureau of Labor Statistics. They argue that the accuracy of CPS data is getting progressively worse, largely due to misreporting of key information by survey respondents and an increasing non-response rate. CPS data are crucial not only for economic and social-science research, but also for the design and evaluation of federal and state programs.

To gauge the accuracy of survey data, the researchers linked survey statistics with actual assistance program records. They studied CPS data for New York State for the 2008–13 period, and obtained state administrative data from 2007 to 2012 for three key programs: food stamps, Temporary Assistance for Needy Families (TANF) and General Assistance. From the U.S. Department of Housing and Urban Development, they also obtained data about housing assistance from 2009 to 2012. Often, the administrative data made possible pinpointing the dollar amount of assistance to individuals and specific households.

Comparison of the various data sources showed frequent underreporting of transfer program participation by survey respondents. For instance, the CPS missed over one-third of housing assistance that recipients received, 40 percent of food-stamp assistance, and 60 percent of TANF and General Assistance aid to recipients. The researchers conclude that the CPS data significantly understated the income of poor households and the effects of anti-poverty programs.

"Using the combined data rather than survey data alone, the poverty reducing effect of all programs together is nearly doubled while the effect of housing assistance is tripled," the researchers find.

Using the administrative data, the researchers note that the number of single mothers who are falling through the safety net is much smaller, perhaps only half as large, as previously suggested by survey data.

"We find that underreporting of government transfers severely understates income of those in deep poverty and thereby makes poverty look more severe and inequality look worse than it truly is," the authors note. "Using the administrative variables, poverty and inequality are lower than officially reported, program effects are larger, and fewer individuals have fallen through the safety net."