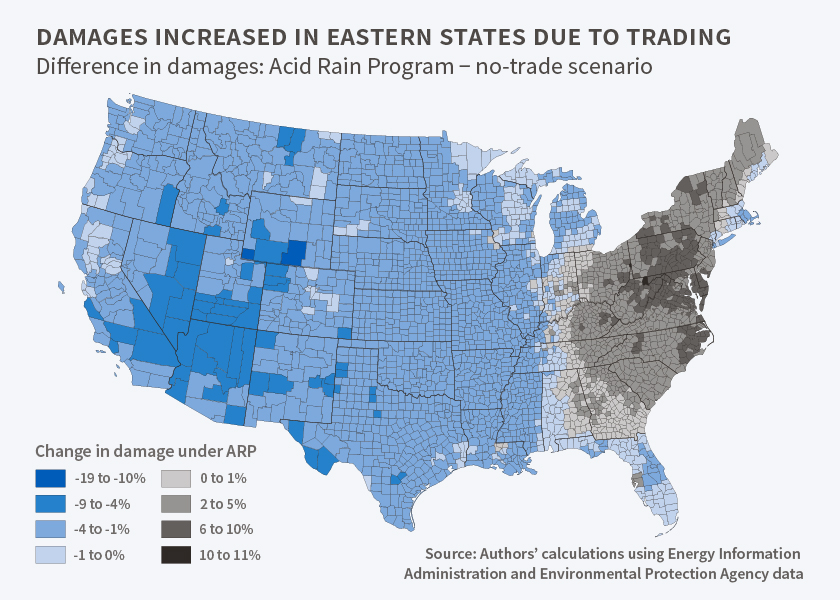 The Acid Rain Program led to higher levels of premature mortality than would have occurred under a hypothetical no-trade counterfactual with the same overall sulfur dioxide emissions.

Since the passage of the Clean Air Act of 1990, the federal government has pursued a variety of policies designed to reduce the level of sulfur dioxide emissions from coal-fired power plants and the associated acid rain. In The Market for Sulfur Dioxide Allowances: What Have We Learned from the Grand Policy Experiment? (NBER Working Paper 21383), H. Ron Chan, B. Andrew Chupp, Maureen L. Cropper, and Nicholas Z. Muller evaluate the cost savings and the health consequences of relying on a cap-and-trade sulfur dioxide allowance market to implement emissions reductions.

The key argument advanced by proponents of cap-and-trade programs for pollution reduction is that they are less costly than regulatory programs that impose the same abatement requirements on all polluters. By allowing emission sources with high abatement costs to offset higher on-site emissions by purchasing additional reductions from other, lower-cost polluters, they assert trade in pollution allowances reduces the total cost of achieving a given reduction in aggregate emissions.

To study the cost savings associated with the Acid Rain Program, which allowed such trade, the authors model the cost of abatement for individual coal-fired power plants. They estimate how firms choose between the two leading technologies for sulfur dioxide abatement, burning low-sulfur coal and installing flue-gas desulfurization units. They use these estimates to compare abatement decisions corresponding to the Acid Rain Program and standards that achieve the same aggregate reduction in emissions by making uniform requirements on coal-fired plants, with no trading allowed. They find cost savings in 2002, with the Acid Rain Program in full swing, of approximately $250 million from trade in emission allowances. This is less than half of the previously estimated saving from tradable permits. The data suggest that many generating units were not complying with the Clean Air Act in the most economical manner.

One potential drawback of a cap-and-trade system is that in some areas the level of local pollutants — those which pose the greatest health threat near their place of emission — can be higher than under uniform emission standards. This could occur if, for example, utilities in the densely populated eastern United States, where emission reduction can be comparatively costly, pay utilities in less-populous western regions, where abatement is cheaper, to cut emissions there. The aggregate national reduction may still be achieved, but many more people in the densely populated east could be exposed to pollutants.

The researchers find a greater level of particulate air pollution and associated premature mortality under the Acid Rain Program than under a hypothetical no-trade scenario in which units emitted SO2 at a rate equal to 2002 allowance allocations plus observed drawdowns of their allowance banks. They estimate the cost of health damages associated with observed SO2 emissions in 2002 under the Acid Rain Program to be $2.4 billion higher than would have been the case under the no-trade scenario. They conclude that the health impact of a cap-and-trade program depends on how the program is structured and on the correlation between marginal abatement costs and marginal damages across pollution sources.