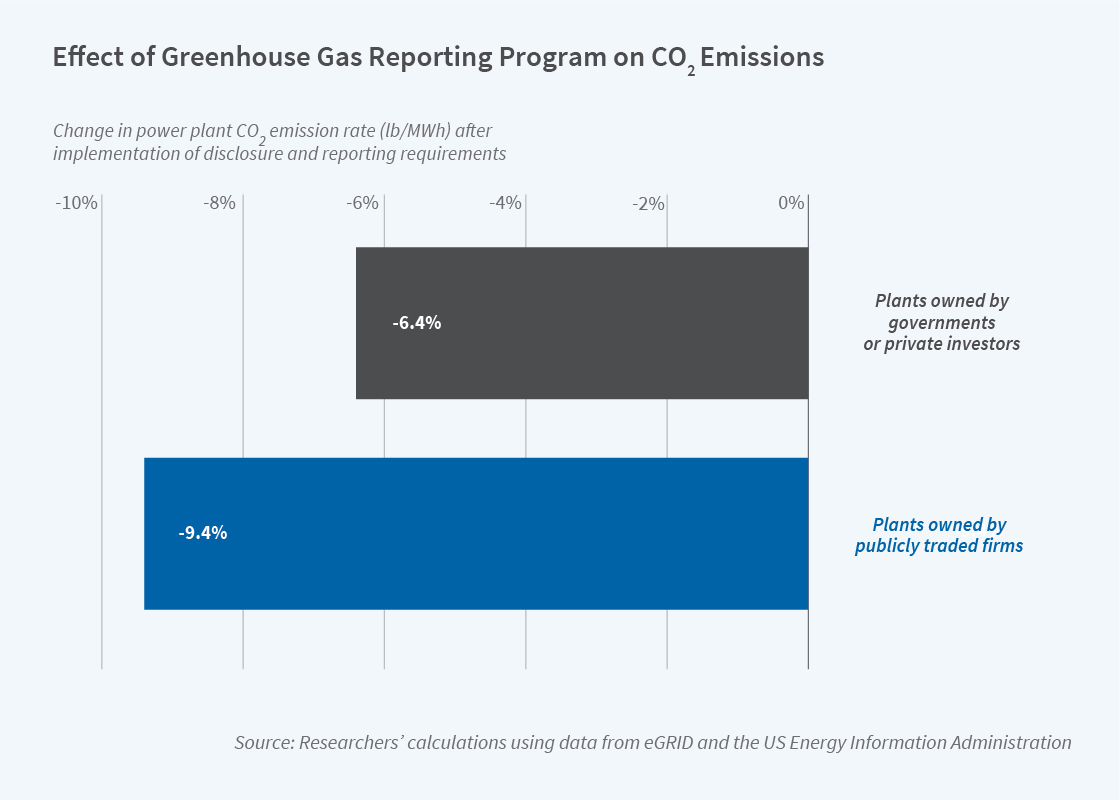 When large power plants were required to disclose their carbon dioxide output, emissions fell by more than 7 percent, while at some small plants, exempt from disclosure, emissions rose at least 25 percent.

Transparency alone can serve as a tool to reduce greenhouse gases, according to a study of a federal program mandating comprehensive emission reporting by large electric power plants.

In The Real Effects of Mandatory CSR Disclosure on Emissions: Evidence from the Greenhouse Gas Reporting Program (NBER Working Paper 28984), Lavender Yang, Nicholas Z. Muller, and Pierre Jinghong Liang investigate whether businesses change their behavior in response to a new disclosure requirement. They study the Greenhouse Gas Reporting Program, which applied to all large emitters of greenhouse gases. The study focuses on the electric power industry, the second-largest source of greenhouse gases in the United States and the source of 27 percent of all emissions. Because of regulatory requirements, data on power plants are more extensive than data on other economic sectors with large stationary sources of carbon dioxide (CO2) emissions.

The reporting program, which took effect in 2010, requires all emission sources, including all power plants that produce more than 25,000 tons of carbon dioxide a year, to report their emissions to federal regulators for public dissemination. Prior to this policy change, power plants of all sizes were required to report key environmental measures, but the information was not as accessible to the public as under the new program. The new regulations provided “more accessibility, standardization, comparability, higher frequency reporting … and overall a higher national prominence of the emissions data.”

The researchers sampled US power plants over the years 2004 to 2018 and found that those subject to greater scrutiny reduced their CO2 emission rates by 7 percent. Emissions fell 10 percent among plants owned by publicly traded firms, and by 11 percent among the largest public firms, those included in the Standard and Poor’s 500. The researchers attribute these larger adjustments to direct or anticipated stockholder pressure.

The decline in emissions by major plants was partially offset by an increase in emissions by plants that fell under the 25,000-ton threshold, for which emissions reports were publicly available but not as easily scrutinized. Firms that owned plants in both categories appeared to have shifted production to their smaller facilities, where emission rates increased by between 25 and 56 percent. Major emitters were also 55 percent more likely to switch to cleaner fuels than those unaffected by the new transparency regulations.

The researchers conclude that “standardized, mandatory CSR [corporate and social responsibility] reporting (without thresholds) has the potential to induce large-scale changes in firm behavior.”

The Real Effects of Mandatory CSR Disclosure on Emissions: Evidence from the Greenhouse Gas Reporting Program