Investment Banks as Corporate Monitors in the Early 20th Century 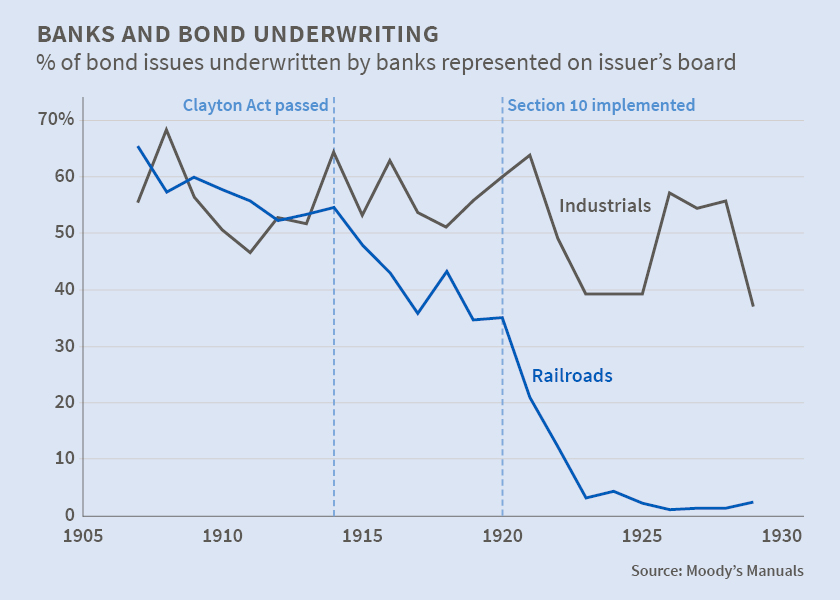 Barring underwriters from boards penalized railroads by denying them access to lower-cost financing for larger investments and led to lower market valuations.

In the early 20th century, close affiliations between American public companies and investment banks were common, particularly among railroads, which were the largest and most widely held corporations. On average, railroads had 41 percent of their securities underwritten by institutions represented on their boards. But in response to concerns that investment bankers were abusing their positions for their own benefit, Section 10 of the Clayton Act, which went into effect in 1921, prohibited investment bankers from serving on the boards of railroads for which they underwrote securities. The authors use newly collected panel data on public companies from 1905 to 1929 for their empirical tests.

Drawing on theoretical insights about corporate finance in the presence of asymmetric information, the authors predict that following the implementation of Section 10, firms that would have chosen to have a relationship with an underwriter-monitor would experience an increase in the cost of external finance, and a decline in market value, investment, and borrowing, as a result of the regulation. In line with these predictions, the empirical results indicate that the regulation limited bankers' roles as monitors and undermined the railroads' ability to finance valuable investment opportunities. Investment rates declined by 28 percent following the implementation of Section 10, suggesting that railroad investment decisions were quite sensitive to the availability and cost of external financing. Valuations and leverage also experienced declines but in a more modest range, between 2 and 5 percent. Average interest rates increased around 4 percent.

In order to verify that the Clayton Act was in fact responsible for these changes, the authors perform the same empirical analysis on industrial firms, which were not subject to the law. They find no effects on industrial firms with close relationships with their securities underwriters following the imposition of Section 10.

Therefore, although the goal of the Act was to prevent financiers from overcharging railroads and their investors through self-dealing, the regulation in fact harmed the firms it was intended to help. Indeed, the benefits from monitoring and facilitating access to credit outweighed the costs for those railroads. Prohibiting close financial relationships penalized firms by denying them access to lower-cost financing for larger investments, and led to lower market valuations.

These results highlight the possibility of unintended consequences from financial regulation. Although this analysis is restricted to railroads, the benefits of close relationships between companies and their financiers might have been even higher for industrial firms which had less-established reputations, less collateral, and poorer disclosure of financial information than railroads. While it is less common for major American corporations to have bankers on their boards today, the findings are relevant for countries around the world with more limited protections of investors or strong asymmetries of information between insiders and outsiders.