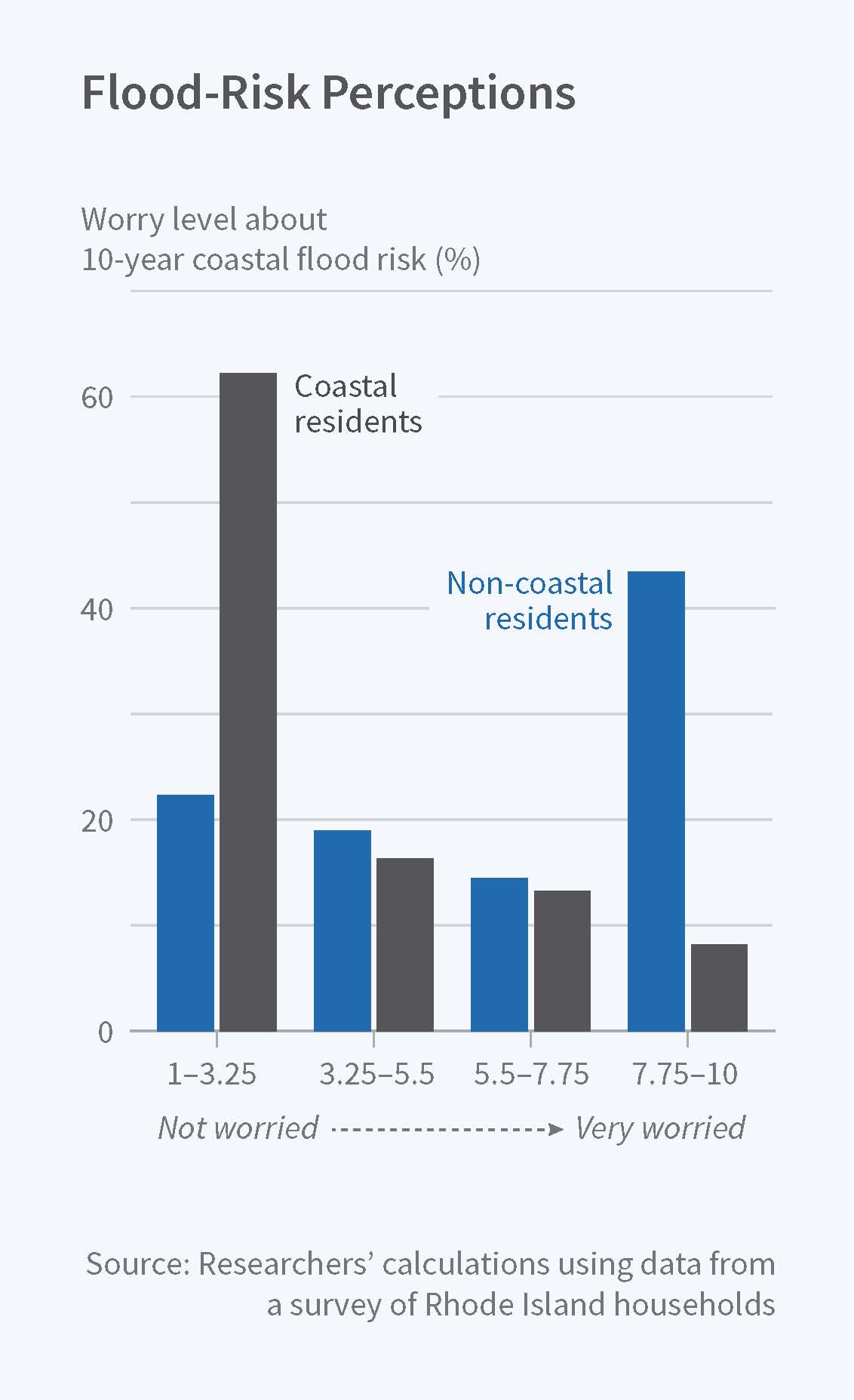 Rhode Islanders who live on the coast are less concerned about the risk of flooding than their inland neighbors.

How are the risks of storm damage, rising sea levels, and other weather-related events priced into shoreline properties? The answer depends on whether potential home buyers share similar beliefs about these risks. If some potential buyers are more optimistic than others about the cost of such risks, they will be prepared to pay more for coastal properties than their more pessimistic contemporaries.

Laura A. Bakkensen and Lint Barrage explore the effect of climate risk beliefs on coastal housing prices in Flood Risk Belief Heterogeneity and Coastal Home Price Dynamics: Going Under Water? (NBER Working Paper No. 23854). They survey individuals' perceptions of the likelihood of flooding in Rhode Island, and find that waterfront homeowners perceive less risk than others. Perhaps not surprisingly, these individuals also derive more value from living on the coast. Both factors contribute to explaining their decision to live near the ocean.

The researchers conducted a door-to-door survey in Rhode Island, contacting individuals who lived on the coast — defined as within 400 feet of water — and inland. Respondents were asked how worried they were about flooding. They also were asked what they thought the likelihood of flooding was in the next 10 years for coastal homes. To measure how much people valued living on the coast, the survey included a question asking whether coastal residents would move inland if they received a discount on their monthly housing payments. The survey also included questions regarding the probability of future flood risk, previous flooding in one's own home, and intentions to sell one's home in the future.

Respondents' level of fear regarding flood risk varied systematically with the location of their homes. On average, those living close to the coast were less worried about coastal flooding than those living away from it. Forty percent of homeowners living in high-risk zones said they were "not at all" worried about flooding in the next 10 years; those living inland were more likely to say they would be "very worried" if they lived on the coast. The variance in flood risk perceptions was not driven by different expectations of damages, post-flood government assistance, or insurance coverage.

Individuals' risk perceptions were higher if they had previously experienced a flooded home. Coastal homeowners who were very worried about flooding were more likely to report that they planned to sell their coastal property in the next five years. These findings generally suggest that individuals who perceive a greater risk of flooding tend to live away from the coast.

The researchers point out that it is difficult for households to obtain accurate and detailed information on local flood risks. The Federal Emergency Management Agency designates areas with an annual likelihood of flooding exceeding 1 percent as "high-risk" zones and maintains maps describing areas at high risk. But one in six of the maps is more than 20 years old, and the maps do not describe the relative risks of high-risk areas in detail.

Individuals who underestimate flood risk may out-bid potential buyers with higher risk perception when coastal properties are for sale. The researchers conclude that many current coastal dwellers appear to underestimate flood risks, and point out that if their risk perceptions adjust toward what appear to be the best estimates, then coastal home prices could decline to reflect underlying risk more accurately.