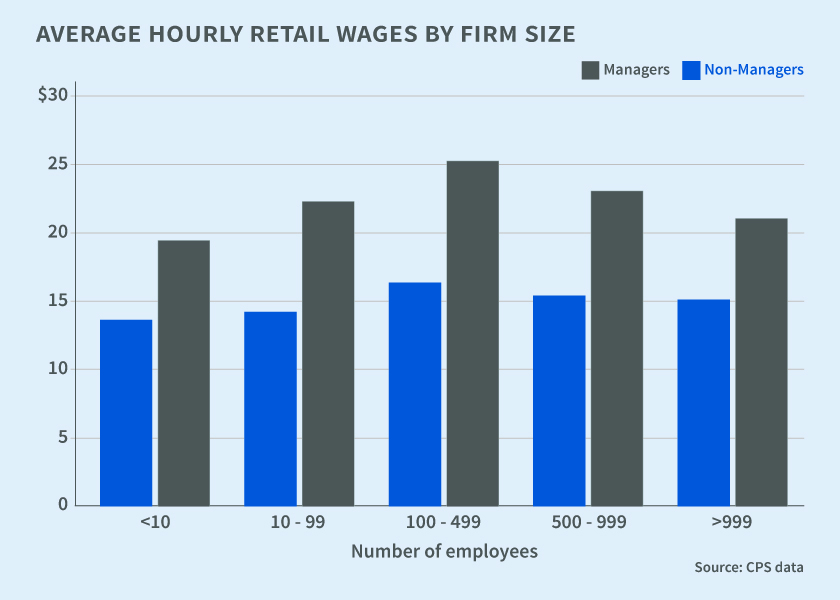 High school graduates who work in retail firms with 1,000 or more employees earn 15 percent more than those in shops with fewer than 10 workers.

Contrary to widespread belief, big-box stores and chains have increased wages in the retail sector as they have spread, according to Do Large Modern Retailers Pay Premium Wages? (NBER Working Paper No. 20313). Retail wages rise markedly with the size of the chain and the individual store, according to the study by Brianna Cardiff-Hicks, Francine Lafontaine, and Kathryn Shaw. As retail chains' share of establishments has risen from one-fifth in 1963 to more than one-third by 2000, the number of jobs that pay better than traditional mom-and-pop stores has proliferated.

Half of the difference in wages between large and small retailers appears to be attributable to differences in the average skill level of workers in the two groups of firms. On average, better workers find their way to the bigger companies. With more levels of hierarchy than small stores, larger establishments also allow better workers to move into management positions, increasing their pay even more.

"The increasing firm size and establishment size that are a hallmark of modern retail are accompanied by increasing wages and opportunities for promotion for many workers," the authors write. "While retail pay is considerably below that in manufacturing, pay in retail is above that found in service jobs... [These results] contradict the image of the retail sector as one comprised of the lowest paying jobs in the economy."

High-school graduates who work in retail firms with 1,000 or more employees earn 15 percent more on average than those who work in shops with fewer than 10 workers. The differential for those with some college education or a college degree is even more marked: pay is 25 percent higher in the larger firms. The study relied on Current Population Survey data to carry out these comparisons.

Using National Longitudinal Survey of Youth data, the authors find that the same holds true for the size of the individual store: the high-school educated earn 26 percent more at stores with 500 or more workers than at ones with fewer than 10; the college-educated earn 36 percent more.

The pay disparities are much less dramatic when the authors control for worker quality. After this correction, they find the large-firm premium is 8 percent for high-school graduates and 11 percent for those with at least some college; the large-store premia are 19 percent and 28 percent, respectively.

The authors conclude that these "results imply that higher-quality workers are sorted into large firms and large establishments, but that working in larger firms or establishments yields additional increases in pay."

These higher-quality workers are also often rewarded with promotions that boost their pay. The study finds that compared across different ability levels, managers make more than 23 percent more than non-managers if they have a high-school education; 20 percent more if they have at least some college.

The finding is important because the frequency of promotion to managerial positions, including first-line supervisors, is high in retail. According to data published by Glassdoor, an entry-level cashier in a Wal-mart store earns an average $8.48 per hour, but a supervisor earns $14.38 per hour. A salaried shift manager makes $62,837 a year and a store manager earns $92,462. High-end grocery and big-box stores, such as Whole Foods and Costco, tend to pay more than other retailers. Manager pay varies substantially in the retail sector: 13 percent of managers earn $20,000 or less, but 33 percent earn more than $50,000.

Wages in the retail sector fall between those in other sectors. According to Current Population Survey data, the average hourly wage in retail is 68 percent of that in manufacturing. On the other hand, retail pays about 15 percent better than service occupations. The average hourly wage for men in non-managerial positions in retail is $16.28, versus $13.97 in services. For women, this disparity is $12.79 versus $11.15.

"The retail sector pays considerably less than manufacturing, but as the manufacturing sector has declined over time, the growth of modern retail chains has increased retail wages and provided more promotion opportunities, particularly for the more-able worker," the authors conclude.