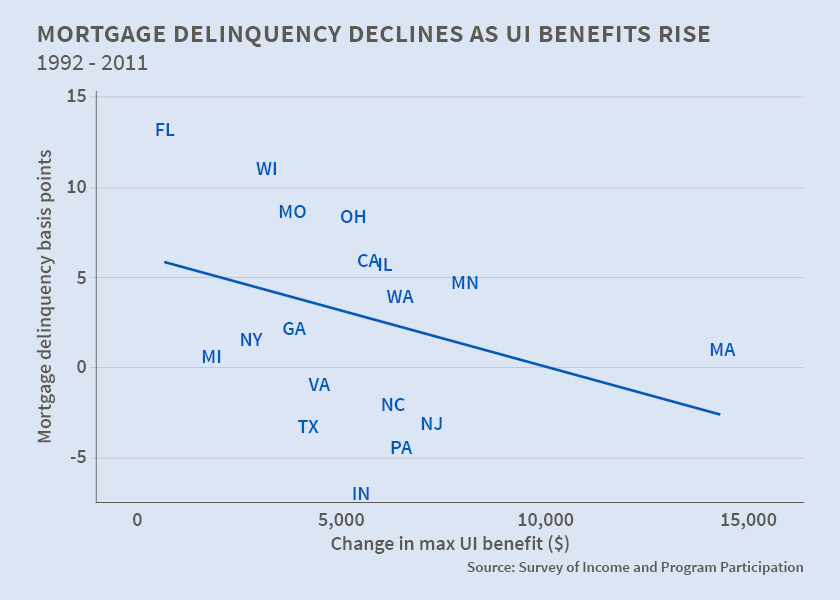 The United States and other developed countries have robust social safety nets that provide households with assistance in the case of job loss, a workplace accident, disability, or health or other problems. Throughout the Great Recession, as home values declined and foreclosures proliferated, housing issues dominated debates on economic policy. A key motivation for policy intervention was to avoid the costs of foreclosure borne by borrowers, lenders, and even those in the surrounding communities. Despite general agreement on the motives for intervention, policymakers struggled to design and implement effective policies. Debate centered on whether foreclosures were caused by job loss, payment shocks, or underwater borrowers' incentive to "strategically default." Accordingly, policymakers debated whether programs should focus on improving borrowers' ability or their incentive to repay.

Many previous studies have evaluated the benefits of unemployment insurance (UI) and other transfer programs by focusing on improvement in the living standards of direct recipients. But consumer credit markets can amplify social insurance's effects. Expanding social insurance can reduce lenders' perceptions of risk in low-income populations, increasing access to credit in at-risk populations even before those populations draw on the insurance. Also, social insurance that reduces defaults, such as in mortgage markets, benefits communities and individuals whose property values and environment would have been endangered by widespread foreclosures and destitution.

In Positive Externalities of Social Insurance: Unemployment Insurance and Consumer Credit (NBER Working Paper No. 20353), authors Joanne W. Hsu, David A. Matsa, and Brian T. Melzer explore the role of unemployment benefits in consumer credit markets. The authors focus specifically on unemployment insurance, the largest government transfer program outside of social security and government-sponsored health care. Exploiting differences in the generosity of UI across U.S. states and over time, the authors find that mortgage delinquency and default decline as benefits rise. The impact of benefit payments during the Great Recession was substantial. The authors estimate that federal expansions of UI helped to avert about 1.4 million foreclosures and $70 billion of associated costs between 2008 and 2012. Furthermore, they find that higher benefits improve credit access for the poor, even while they are employed. In that way, unemployment insurance confers social benefits not previously highlighted by academic research.

Even if not by design, unemployment insurance stemmed foreclosures in a period when more-targeted housing programs such as the Home Affordable Refinance Program and the Home Affordable Modification Program underperformed their goals. UI achieved the goal of those programs - making loan payments more affordable - while avoiding key challenges of loan refinancing and modification, such as the need for lenders' and loan servicers' cooperation in screening borrowers and modifying loan contracts. UI bypassed lenders and loan services by transferring money to homeowners directly. By linking assistance to an observable economic shock beyond a household's control (i.e., job displacement), UI also distorted homeowner choices less than assistance conditioned on indebtedness or payment delinquency.

Although expanding UI reduced foreclosures during the crisis, the authors point out that it is a blunt policy instrument that has both costs and benefits. Increasing benefit generosity has the potential to distort all recipients' job searches, even though it reduces foreclosure risk only among the roughly half of recipients who are mortgagors. More-targeted policies that could direct additional cash assistance to unemployed mortgagors include the Hardest Hit Fund and similar programs proposed by housing economists. The findings in this study suggest that such programs could help to stabilize the housing market during times of crisis.