How China's WTO Entry Led to Lower Prices in the US 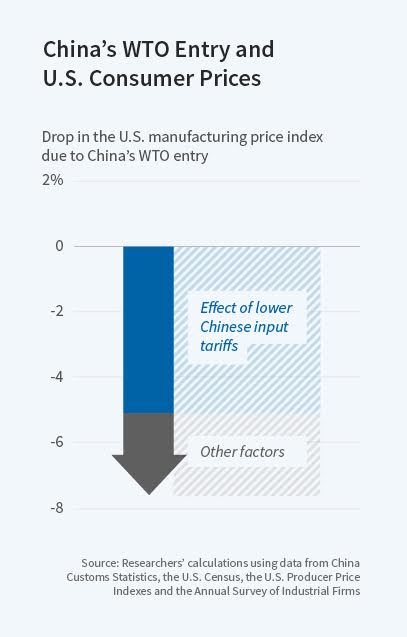 The U.S. price index for manufactured goods fell by an estimated 7.6 percent, mostly because the lowering of Chinese import tariffs enhanced China's competitiveness.

Current public debate has focused on domestic firms' loss of market share to lower-priced international competitors and consequent reduction in domestic employment. Far less attention has been paid to the improvement in living standards that arises when international competition leads to lower prices and increased productivity.

In How Did China's WTO Entry Benefit U.S. Consumers? (NBER Working Paper No. 23487) Mary Amiti, Mi Dai, Robert C. Feenstra, and John Romalis find that U.S. imports of manufactured goods from China reduced the U.S. price index for manufactured goods by an estimated 7.6 percent between 2000 and 2006, due to China's entry into the World Trade Organization (WTO) in 2001. The resulting savings were large: U.S. manufacturing sector production was valued at $4.5 trillion in 2014, so if prices had been 7.6 percent higher, that production would have cost $340 billion more.

The researchers attribute at least two-thirds of the U.S. price change to changes in China's internal tariff policy, particularly reduction in tariffs on imported inputs, which lowered costs for Chinese producers and hence enhanced their global competitiveness. Chinese tariffs on imports were reduced from an average of about 15 percent in 2000 to 9 percent in 2006. Along with lowering tariffs, the Chinese government moved to stimulate Chinese exports by lifting export restrictions on domestic industry and removing capital requirements for exporters. It relaxed prohibitions on foreign direct investment, lifted limits on textile exports, and reduced the number of products that required import licenses. China's WTO entry set the stage for the awarding of permanent normal trading relations by the U.S. federal government in 2002. This reduced uncertainty about the size of U.S. import tariffs faced by Chinese exporters.

China's manufacturing exports to the United States grew 290 percent from 2000 to 2006. The researchers estimate that 69 percent of the growth was driven by new exporters offering a widening variety of products, while 16 percent was created by incumbent firms exporting new products.

Chinese firms benefited from rapidly rising productivity. The researchers estimate that total factor productivity for Chinese exporters to the U.S. grew by an average of 10 percent per year over the period, while real value added per worker grew 11 percent per year. The researchers derive these estimates from detailed U.S. and China annual trade data, customs data, U.S. producer price indexes, and survey data on the output, materials cost, employment, capital, and wages of individual Chinese firms.

Because lower Chinese import tariffs improved the productivity of Chinese firms and lowered their costs, those firms were better able to compete in the U.S. market and were more likely to try to enter it. The researchers conclude that the lowering of Chinese import tariffs was responsible for more than 65 percent of the reduction in U.S. manufacturing prices resulting from China's entry into the WTO.