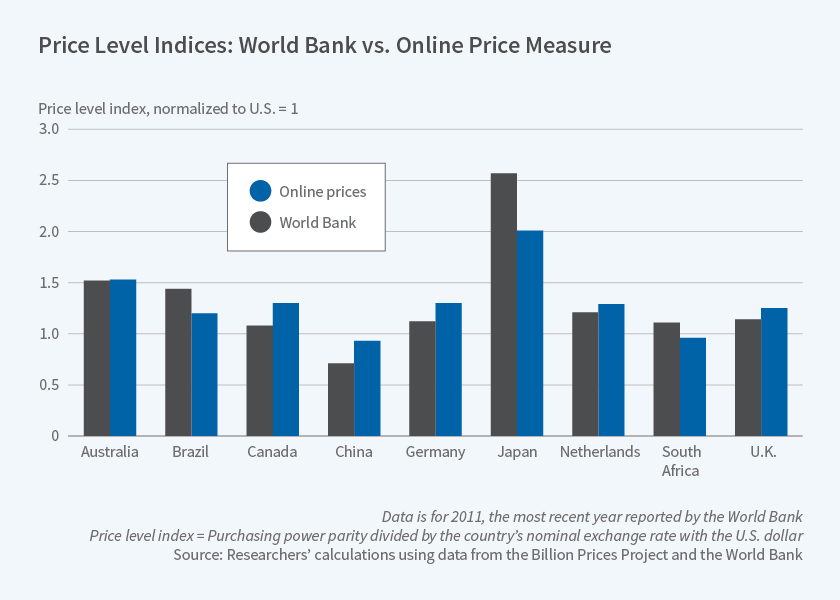 Data gathered online can be used quickly and transparently to compute PPP measures, but the results may be less accurate in countries that are more rural and have fewer large retailers.

Prices of similar products in different countries are used to calculate purchasing power parity (PPP), a measure of the relative cost of living in various nations. PPP estimates are used to compare the standards of living across countries, and are sometimes used as a basis for comparison of exchange rates. Calculating PPP measures can often take a long time, however, because of lengthy data collection and analysis and the inherent lags in producing government economic statistics.

The researchers develop a method similar to that of the International Comparison Program (ICP) at the World Bank. The ICP data collection process, however, is not especially transparent, and the publication of PPP values can take up to six years.

The researchers use online price data from the Billion Prices Project at MIT, a research initiative that scrapes web prices from large online retailers. The data cover products across 11 countries in three categories: electronics, fuel, and food and beverages. Certain branded products are sold in multiple countries, but the majority of goods, such as ground coffee, are grouped into item categories of like products.

Beyond increased transparency surrounding data collection processes, the researchers can also collect data at high frequency: every day. This allows them to examine PPP variation within a year, which can be of substantial interest in high-inflation countries.

The researchers note that while using online prices results in timelier estimates, this approach also has drawbacks. In particular, since the online sample is comprised of large retailers, the data may misrepresent consumption patterns in countries where large retailers are less prevalent. These large retailers are also more likely to sell products in urban localities. The researchers' estimates do not show much regional variation, as online retailers tend to have a single price for a product within a country. The ICP, in contrast, collects prices from physical stores for different kinds of retailers and in a variety of geographical locations, and it incorporates expenditure weights to determine which products are more important in a particular category, a capability not possible with the online data primarily due to insufficiency of data regarding the quantities sold. The researchers note that, while they are working to expand their coverage of various spending categories, their price indices currently cover less than 25 percent of all consumption in the countries studied, due in part to hard-to-measure sectors such as housing and health services. They hope to ameliorate these problems in the future.