Financial Impacts of Medicaid Expansion under the ACA 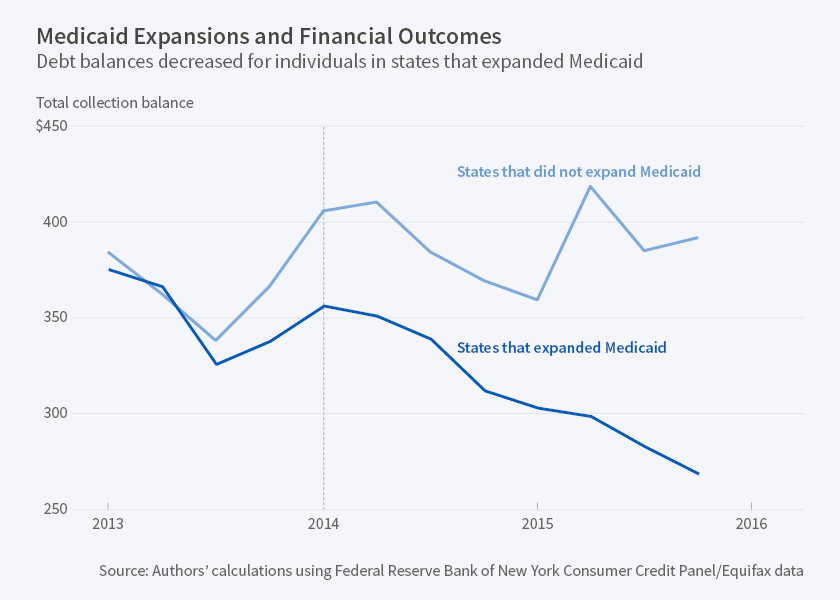 Those who became eligible for Medicaid have less non-medical debt and are in better financial health.

Extension of Medicaid eligibility under the Affordable Care Act (ACA) has not only shielded low-income Americans from out-of-pocket medical costs, but has also improved their overall financial health. That's the finding of a study by Luojia Hu, Robert Kaestner, Bhashkar Mazumder, Sarah Miller, and Ashley Wong on The Effect of the Patient Protection and Affordable Care Act Medicaid Expansions on Financial Well-Being (NBER Working Paper 22170).

The consequences of an episode of poor health cascade far beyond the sickbed. The researchers note that uninsured individuals who need hospital care can experience reduced access to credit and elevated bankruptcy risk, along with unpaid medical bills. In this national study, the researchers find that Medicaid expansions "significantly reduced the number of unpaid non-medical bills and the amount of non-medical debt sent to third-party collection agencies."

A Supreme Court ruling that was a setback for ACA proponents provided a control group for the study. The original legislation called for all states to expand Medicaid to income-eligible adults under 65. The high court ruled that states could opt out, which 21 had done as of the end of 2015.

To measure financial well-being, the researchers drew on national credit report data from the Federal Reserve Bank of New York and Equifax covering 2010 through 2015—a period that begins four years prior to Medicaid expansion and ends two years after it. After controlling for other factors that influence personal financial health, they compared residents of states that expanded Medicaid with those of states that did not, focusing on zip codes with the highest concentration of uninsured adults under age 65 who met the federal income standard for Medicaid.

Using estimates from the study, the researchers calculated the impact of the Medicaid expansion on those who gained coverage and found that the expansion reduced their non-medical debt in collection by $600 to $1,000. When the researchers calculated the effect on individuals who experienced an illness that required hospitalization or admission to an emergency room, expansion of Medicaid reduced debt by an estimated $1,400 to $2,300. The impact was more pronounced among older than younger age groups.

The researchers found no significant change in other measures of debt, such as credit card balances, in the years following Medicaid expansion.