Why the Euro Hasn’t Become an International Currency of Stature 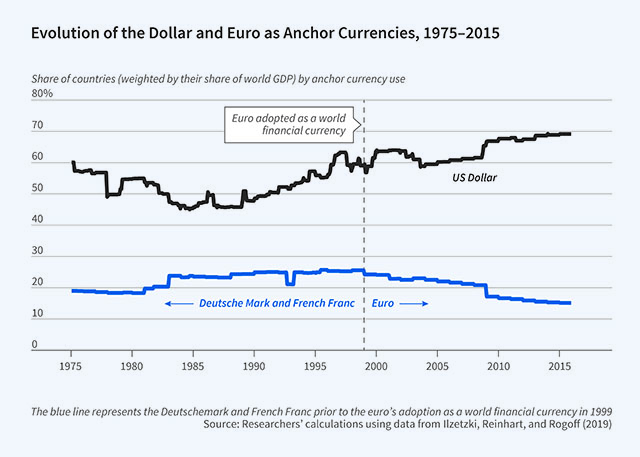 There is an inadequate supply of high-quality euro-denominated assets that international investors and central banks can use as a store of value, and no eurozone-wide “safe” government-backed asset.

Launched in 2002 as the sole legal tender in 12 countries, the euro’s introduction marked a milestone in a decades-long effort to provide Europe with an international currency of the same stature as the dollar. While now used by 341 million people in 19 of the 27 European Union member countries, use of the euro is largely confined to the euro area itself, to non-euro EU members, and to former French colonies in Africa.

In Why is the Euro Punching Below Its Weight? (NBER Working Paper 26760), Ethan Ilzetzki, Carmen M. Reinhart, and Kenneth S. Rogoff quantify the euro’s international role, conclude that this role has fallen far short of what its proponents hoped for, and examine the structural roadblocks that have limited the euro’s appeal.

The share of euro-denominated central bank reserves remains slightly over 20 percent, roughly the same as at its introduction. Its use in foreign exchange transactions, as measured by the Bank for International Settlements’ worldwide survey of the largest currency dealers, has also held roughly constant, at around 35 percent. It peaked at just below 40 percent in 2010. Its share of foreign exchange transactions is slightly smaller than the combined share of the British pound sterling and Japanese yen. Given that the combined Japanese and British GDPs are just two thirds of the eurozone’s output, and that one quarter of the world’s exports originate in the eurozone, the researchers posit that “one might have expected a larger role for the euro.”

Several factors have inhibited the euro’s use. Though its utilization as an invoicing currency in international trade is almost on par with that of the dollar (albeit much of this is for intra-eurozone trade), there is an inadequate supply of high-quality euro-denominated assets that international investors and central banks can use as a store of value. Even though eurozone governments are heavy borrowers, there is no eurozone-wide “safe” government-backed asset. While Greek and German government debt may both be denominated in euros, they have neither the same risk nor the same marketability. Though US GDP is only 50 percent larger than that of the eurozone, over $14 trillion in dollar-denominated, marketable US government-backed debt was available in 2018, over three times more than the $4 trillion of marketable sovereign debt that was euro-denominated.

The study finds that the US has a far superior capacity for securitizing assets, given its unified and relatively reliable legal and regulatory system. The combined market capitalization of US equity markets accounts for nearly half of total world equity market capitalization, even though the US accounts for only 20 percent of world GDP. In contrast, companies in the eurozone rely heavily on bank financing. Close to 80 percent of eurozone corporate debt is held as unmarketable assets on bank balance sheets, compared to 30 percent In the US, and the stock of outstanding US nonfinancial corporate debt is almost five times as large as outstanding eurozone nonfinancial corporate debt.

Limits on the reach of the European Central Bank(ECB) raise questions about whether it can “gain the credibility required to expand its international role,” the researchers argue. After estimating monetary policy reaction functions for all eurozone members and for the eurozone as a whole, they find that, from 1999 to 2011, ECB policies were basically the same policies that the German Bundesbank would have employed. The result was to stabilize inflation in Germany, but not for the currency area as a whole. After the 2008 financial crisis, when the euro’s survival was on the line, the ECB adopted bolder “whatever it takes” policies that may have created new uncertainties about the nature and credibility of the euro anchor, and thereby discouraged reliance on the currency outside the eurozone.

Ed. Note: This working paper was written before the onset of the coronavirus crisis.

Why Is the Euro Punching Below Its Weight?