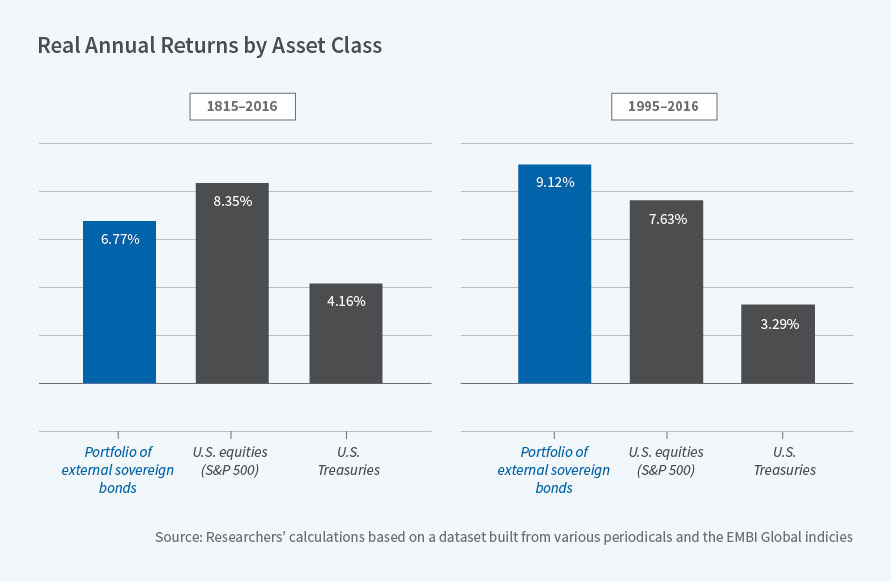 External sovereign bonds denominated in U.S. dollars or British pounds had average annual real returns of 6.8 percent between 1815 and 2016, even after accounting for defaults, wars, and revolutions.

Why do investors lend to national governments with a history of defaulting on external sovereign bonds? New research suggests the answer is that, on average over the last two centuries, sovereign bonds have been a profitable investment.

External sovereign bonds are bonds issued by a national government in a foreign currency and traded in financial centers such as London or New York. The modern market for such bonds dates back to 1815. The emerging-market debt boom that began after the Battle of Waterloo that year ended with the financial panic of 1825. Greece defaulted for the first time on its external bonds in 1826. Since then, it has defaulted six more times. Over the same period, Russia has defaulted four times, China eight times, Venezuela nine times, and Mexico ten.

According to Josefin Meyer, Carmen M. Reinhart, and Christoph Trebesch, investors continue lending to repeat defaulters because it pays. In Sovereign Bonds since Waterloo (NBER Working Paper 25543), they calculate that, for a global portfolio of sovereign bonds in British pounds or U.S. dollars, investors reaped an average inflation-adjusted return of 6.77 percent per year. This is the full-sample average over the period 1815 to 2016, but the averages for most decades are comparable (in the range of 5–10 percent), with the interwar period seeing particularly low returns.

That return is equivalent to the average return from stocks over the same period. It is greater than the return on corporate bonds, and about 4 percent higher than the return to holding government bonds issued by the U.S. or U.K. government. Risk-averse investors demand, and get, higher compensation for shouldering the higher risk represented by governments with limited means or histories of serial default. The yields on bonds issued by serial defaulters are on average significantly higher than the yields paid by less-risky external debt.

To study the return on external sovereign bonds, the researchers construct a dataset containing monthly price quotations for over 1,400 bonds from countries other than the U.S. or U.K. The dataset has 219,968 monthly observations spanning the 1815 to 2016 period. A second dataset quantifies the losses — the "haircuts" — investors incurred when bonds were restructured or repudiated. It contains information on 313 external sovereign debt restructurings in 91 countries.

Coupon payments account for about 70 percent of the returns on these bonds. Outright debt repudiation is rare, as almost all defaults are settled with restructurings, with haircuts well below 100 percent. The average haircut in the sample is 44 percent and includes restucturings after tumultuous events such as major wars, communist revolutions, and the Great Depression. Bond returns typically recover after a default. On average, cumulative bond returns drop by about 15 percent in the wake of a default event and then stagnate for a few years, but on average, investors who enter two years before a default break even four years after the default. For low haircut cases, which the researchers define as cases in which the investors lose less than 47 percent of their investment (the sample median), losses are typically recouped within two years of the initial default.

The statistic on average haircuts masks some really low returns. The worst performing 25 percent of bonds left investors with substantial losses even after six years. Some defaults took decades to settle. The researchers note that most of the bonds in the bottom quartile were issued prior to World War II. Since the 1990s, only two defaults have produced long-lasting creditor losses: Investors exposed to Argentina's 2001 default did not break even until 2016, and those who held Ecuadorian debt at the time of the 2008 default continued to have losses until 2013.

Between 1815 and 1973, average inflation-adjusted returns were 6.4 percent and haircuts averaged 1.3 percent. From 1973 to 1995, the external sovereign bond market was relatively small, as most lending to sovereign countries came from syndicated bank loans. Defaults on these loans in the 1980s were followed by a reinvigoration of the market for external sovereign bonds. From 1995 to 2016, real annual returns averaged 9.1 percent with an average yearly haircut of just 1.1 percent.