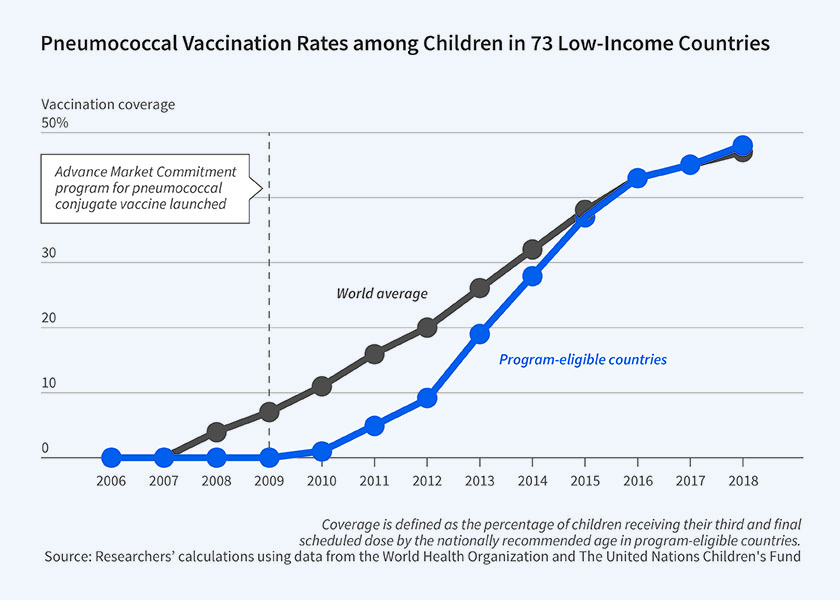 Five nations and the Gates Foundation committed $1.5 billion to support development of a pneumococcal conjugate vaccine that is estimated to have saved 700,000 lives in low-income countries.

Advance Market Commitments (AMCs) were proposed in the early 2000s as a way to encourage the development and distribution of vaccines for diseases primarily affecting developing countries. AMC donors pledge that if a firm develops a specified new vaccine and sets the price close to the manufacturing cost, they will “top-up” the price by a certain amount per dose.

AMCs aim to solve several problems in the vaccine market. Firms’ incentives to develop vaccines for low-income countries may be weak because of a limited ability to pay there. The top-up payment strengthens firms’ incentives by increasing the profitability of serving those markets. After a vaccine has been developed, firms often set the price well over the marginal cost, leaving poor people unable to access lifesaving vaccines that are cheap to produce. The AMC’s price cap ensures that the vaccine remains affordable.

In 2007, five countries and the Gates Foundation pledged $1.5 billion to fund a pilot AMC targeting a pneumococcal conjugate vaccine (PCV). At the time, the World Health Organization estimated that pneumococcus killed more than 700,000 children under five in developing countries annually. The AMC was launched in 2009 under the supervision of GAVI (formerly the Global Alliance for Vaccines and Immunizations), covering 73 low-income countries. Responding to GAVI’s initial tender in 2010, GlaxoSmithKline and Pfizer each committed to supply 30 million doses annually at $10.50 for a three-dose course.

By 2016, PCV had been distributed in 60 of the 73 eligible countries. Annual distribution exceeded 160 million doses, enough to immunize over 50 million children per year. By 2018, nearly half of the target child population in GAVI countries was covered. While PCV coverage is far from full, it is now as high as in non-GAVI countries. The catch up to the rest of the world was nearly five years faster than observed for the rotavirus vaccine introduced in GAVI countries around the same time without an AMC, suggesting that the pilot AMC may have spurred firms’ otherwise lagging investment in capacity to serve low-income countries.

In 2019, a third vaccine developed by the Serum Institute of India qualified for the AMC program. Serum Institute is expected to participate in tenders for the remaining $262 million of uncommitted AMC funds, reportedly pricing its vaccine at $6 per three-dose course for low-income countries. The best estimates suggest that the development and distribution of PCV has saved approximately 700,000 lives since 2010.

The researchers note that PCV, already far along in development, was a technologically close target. AMCs for technologically more distant targets, like a malaria vaccine, may have even greater benefits but may face greater political hurdles. They also point out that the AMC design could be expanded beyond health targets to the development of new crop varieties and other challenges.