The Geopolitics of International Currency Choice 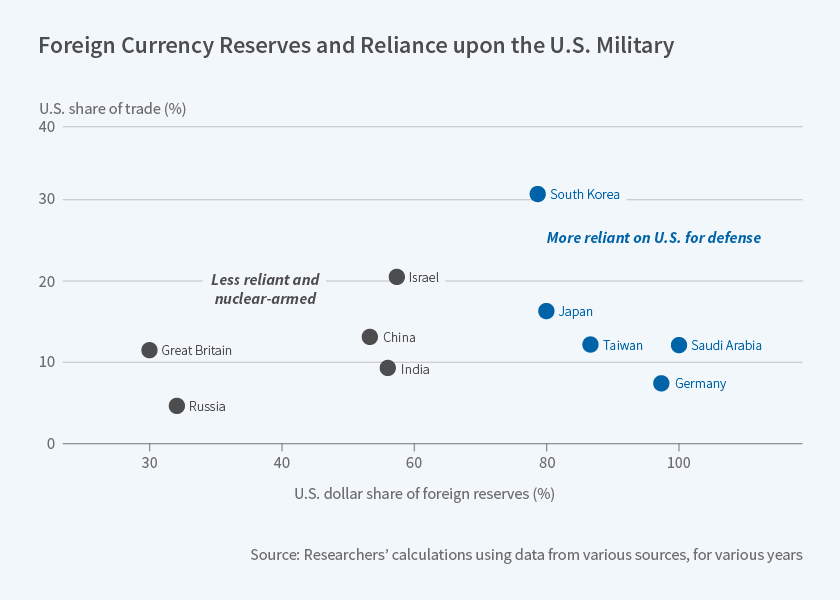 Countries that rely on the United States for military protection hold a higher fraction of their foreign exchange reserves in U.S. dollars.

If other nations believe that the United States is disengaging from international security alliances, this could lead to an increase in the interest rates on U.S. Treasury debt, according to Barry Eichengreen, Arnaud J. Mehl, and Livia Chitu in Mars or Mercury? The Geopolitics of International Currency Choice (NBER Working Paper No. 24145). They find that military alliances as well as financial considerations influence the composition of a nation's foreign currency reserves, and suggest that if the U.S. were to withdraw from global geopolitical affairs, foreign demand for dollars might decline. This could ultimately lead to higher long-term interest rates in the U.S..

The Mars theory could explain why Germany, a non-nuclear power, holds most of its foreign reserves in dollars, unlike nuclear-armed France. "Comparing nuclear weapon states and states dependent on the U.S. for their security suggests that the difference in the share of the U.S. dollar in foreign reserve holdings is on the order of 35 percentage points," they report.

Because historical data on the precise composition of various countries' currency reserves is more accurate than contemporary data, the researchers study the foreign exchange reserves of 19 countries between 1890 and 1913, when five reserve currencies dominated. These were the English pound, the French franc, the German mark, the U.S. dollar, and the Dutch guilder. At the time, gold was still the main reserve asset, but foreign currencies were rapidly gaining in importance. This pre-World War I era was also a time of burgeoning military alliances.

In line with the Mars hypothesis, the share of German marks in the Austro-Hungarian Empire's reserves increased with the strengthening of the Triple Alliance, the secret pact the empire signed with Germany and Italy in 1882. Similarly, Russia made francs a larger share of its reserve portfolio after forging an alliance with France in 1894.

Extrapolating their findings from the pre-World War I period to the current day, the researchers suggest that if the United States is no longer seen as a predictable guarantor of the security of its allies, then countries that are currently dependent on the U.S. for military protection could reduce the share of their reserves held in dollars by as much as 30 percentage points, while increasing the shares of such other currencies as the euro, yen, and renminbi.

The researchers estimate this would raise the long-term U.S. interest rate by 80 basis points, raising interest payments by the U.S. Treasury by roughly $115 billion each year given the level of public debt in late 2016. They note that this is more than many estimates of the cost of maintaining the American military's overseas presence.

Mars or Mercury? The Geopolitics of International Currency Choice