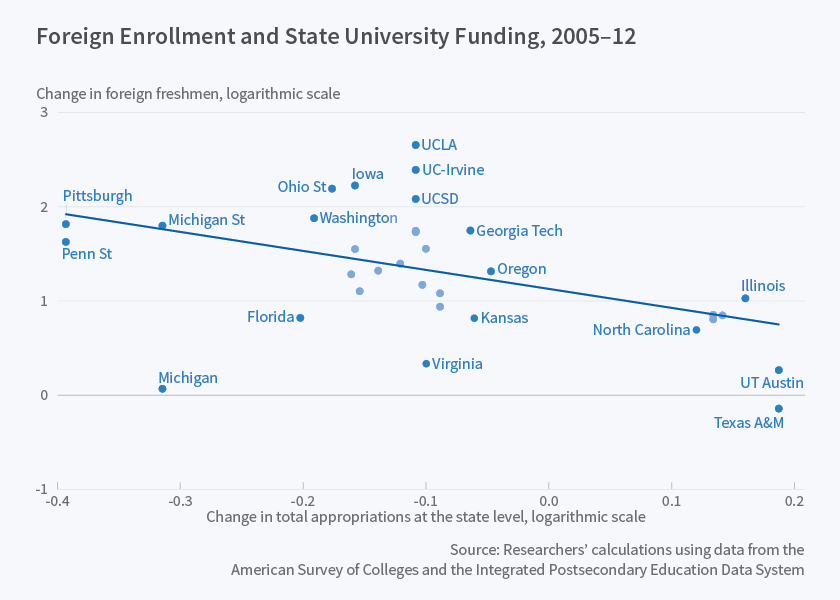 Public research universities are accepting surging numbers of students from China, South Korea, and Saudi Arabia in an effort to balance their books.

Rapid economic growth has increased the numbers of college-ready students in developing economies, especially China, but these countries' research universities have not expanded fast enough to accommodate the increases. As a result, large numbers of international students have applied to universities in the United States at a time when public universities here have faced reductions in state funding, particularly steep cuts associated with the Great Recession.

The result, John Bound, Breno Braga, Gaurav Khanna, and Sarah Turner demonstrate in A Passage to America: University Funding and International Students (NBER Working Paper No. 22981), has been dramatic growth in the number of foreign students at U.S. public research universities.

State universities facing appropriation cuts have three options: increase tuition, cut expenditures, or admit more out-of-state students, who pay much higher tuition than state residents. Universities have increased tuition — with greater increases in states imposing greater funding cuts — but they have also drawn upon the burgeoning supply of students from developing countries who are willing and able to pay full fare.

The researchers examine differences in foreign-student admission rates across institutions and find that they are related not only to the magnitude of state cuts but also to an institution's ability to attract full-paying domestic students and to its attractiveness to foreign students.

Because the supply of domestic, full-paying out-of-state students is limited, only the most popular state universities, such as the University of Michigan and the University of California, Berkeley, can use this applicant pool to compensate for funding cuts. Increases in foreign-student admissions have been greatest in well-reputed research universities below this top tier. Non-research universities did not significantly increase admissions of foreign students as a response to declines in state funding.

The researchers find that these trends tracked closely with the supply of Chinese students, who accounted for more than 90 percent of the increase in foreign students between 2003 and 2013. The rise in Chinese students was due to a general increase in Chinese family wealth, the country's one-child policy, and two specific events in 2005: a shift in China's currency valuation policy that allowed the yuan to appreciate, and a relaxation of student visa requirements that simplified the passage of Chinese students into the U.S.

The capacity of non-research universities in China is more in line with demand, so Chinese students seeking degrees from non-research institutions need not go abroad.

The researchers find that a 10 percent reduction in state funding was associated with a 12 percent increase in foreign enrollment at public research universities, and with a 17 percent increase at more resource-intensive research universities. They find that there is a negative association between additional foreign students and in-state students; however, they note that this association is not causal. Alternatives in which more in-state students were enrolled would imply higher in-state tuition and/or lower resources per student. University of California President Janet Napolitano described the tradeoff: "Nearly every state in the nation has faced this Hobson's choice, and they have all reached the same decision: open doors to out-of-state students in order to keep the doors open for in-state students."

Although admitting foreign students has been a potent mechanism for state research universities to mitigate the effects of dwindling state appropriations, the researchers caution that this may not be a sustainable strategy. "The supply of such students to U.S. universities is not likely to remain constant in future decades," they conclude. "Growth in home-country institutions of close quality or negative shocks to home-country economies would likely drain this pool of students from abroad."

A Passage to America: University Funding and International Students