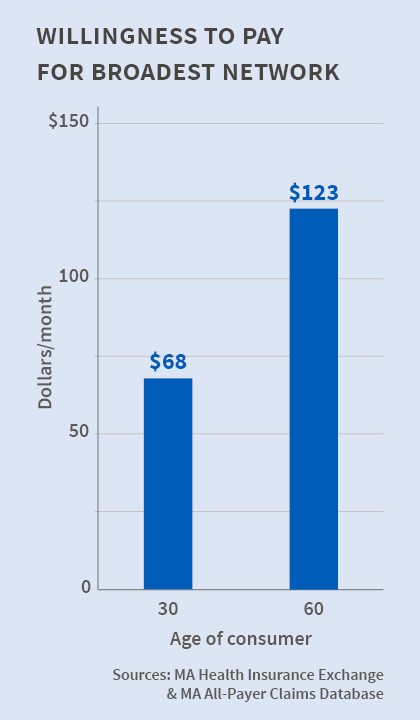 Older people value having the broadest possible network more than the young do, and everyone values "star" hospitals.

Consumers have long been known to focus on policy prices and on the ability to keep their current physicians when choosing health-care insurance plans.

In Measuring Consumer Valuations of Limited Provider Networks (NBER Working Paper No. 20812), Keith Marzilli Ericson and Amanda Starc find that many consumers also put a high value on having the broadest possible provider networks and that 60-year-olds are willing to spend significantly more than 30-year-olds for broad networks. Consumers also put a high premium on access to "star" hospitals when selecting plans.

Previous studies have explored the preferences of health-care insurance customers, but consumers, through their public and private employer-sponsored plans, often don't have a choice among provider networks. As a result, there's been little evidence about how much employees value different types of networks and the hospitals affiliated with them. This is particularly important today with the introduction of the 2010 Affordable Care Act's health insurance exchanges, which allow customers to pick and choose among coverage levels, prices, competing networks, and other factors. The authors note that many believe the networks can steer customers toward lower-cost providers, thereby reining in growth of health care costs.

The authors measured network values by examining data from the exchange established by Massachusetts' landmark health-care reform program, which was implemented late last decade and which served as a general model for the Affordable Care Act's own public exchanges. With data from the Massachusetts All-Payer Claims Database and the Massachusetts Health Insurance Exchange, they used two measures to determine network values: overall consumer demand for hospitals within networks and consumer choices when selecting from competing network plans with posted prices on exchanges.

The results indicated that the size and scope of hospital networks not only were predictive of consumer decisions, but also that the influence on these choices varied by age. The authors found that 60-year-olds valued the broadest network approximately $1,200 to $1,400 per year more than the narrowest network. In comparison, 30-year-olds valued the broadest network by only about half as much.

In addition, the authors explored whether consumers appeared to value the presence of a large "star" hospital in a network. They illustrate their findings with the case of the Harvard-affiliated Massachusetts General Hospital in downtown Boston. They conclude that a 30-year-old was prepared to pay $32 per month more for a plan which included that hospital. This finding is consistent with the notion that "star" hospitals have a recognizable brand and are able to command premium prices. "Star" hospitals are valued by consumers above and beyond the overall network measure, the authors found.