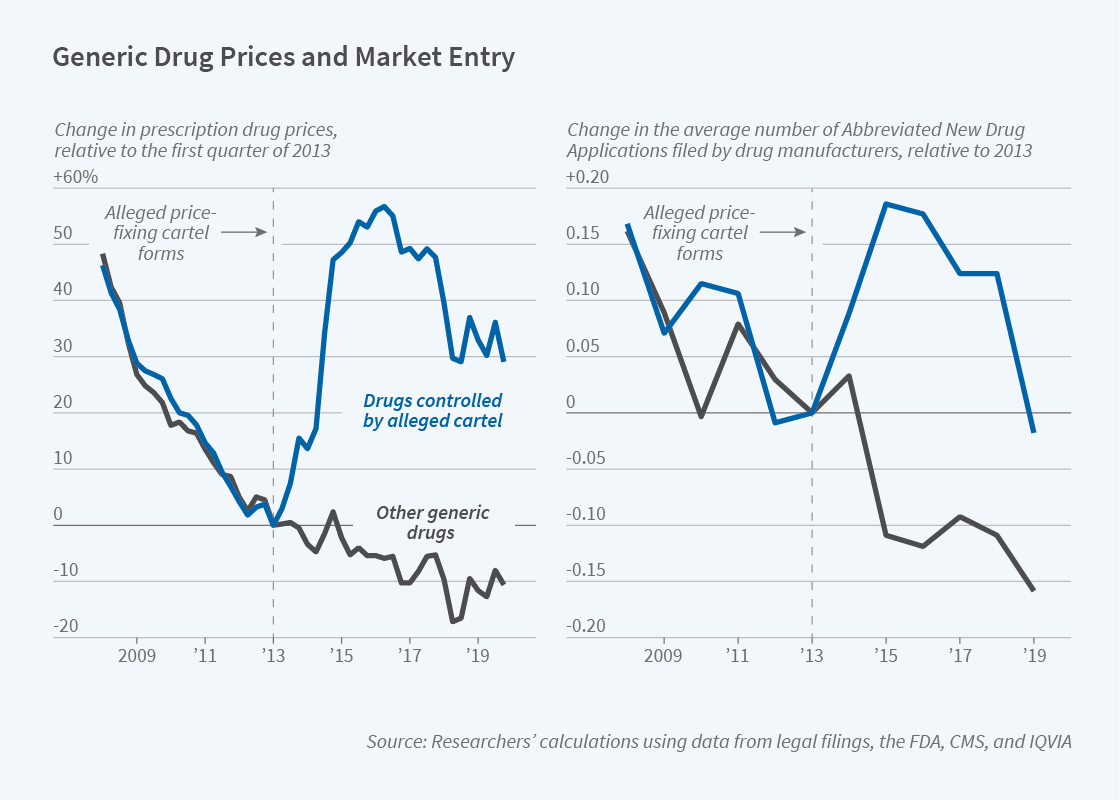 Court cases brought against Teva Pharmaceuticals and a number of other generic drug manufacturers allege that for several years beginning in 2013, they participated in a price-fixing scheme that substantially increased the prices of many generic drugs. In Does Entry Remedy Collusion? Evidence from the Generic Prescription Drug Cartel (NBER Working Paper 29886), Amanda Starc and Thomas G. Wollmann exploit these price increases to study the factors that lead drug companies to enter new markets.

Entry rose in response to price increases. Because there are substantial and uncertain costs associated with entry, however, firms must expect substantial profits before taking this step. The researchers use the observed patterns of entry behavior, along with estimates of the demand for generic drugs during this period, to estimate the price trajectories that might have resulted if new competitors had entered promptly when prices rose.

The researchers study how drug demand and competitive entry responded to the price increases that are alleged, according to a 2019 complaint filed against the drug makers by 44 state attorneys general, to have resulted from the cartel’s operation. The complaint claims that an executive hired by Teva in 2012 led a campaign to raise prices on commonly prescribed medications, such as those for treating cancer, bacterial infections, pain, and high blood pressure. Competitors followed suit; prices rose sharply between July 2013 and January 2015, according to the complaint. This price variation was arguably unrelated to changes in drug demand or other factors.

The researchers chart generic drug prices between 2008 and 2019, comparing trends for those that were allegedly part of the price-fixing scheme with trends for those that were not. The prices for both groups of drugs followed similar downward trends over the 2008–13 period, but their paths diverged after 2013. By 2016, prices on many drugs that were allegedly controlled by the price-fixing cartel had risen by 50 percent relative to other generic drugs.

The run-up in generic drug prices raised costs to consumers by nearly $1 billion in 2013, $1.9 billion in 2014, and $2.5 billion in 2015. The price increases drew government scrutiny and also induced other pharmaceutical companies to enter the markets for specific generic drugs. Compared with the period prior to the alleged formation of the cartel, potential competitors filed 30 to 40 percent more requests for Food and Drug Administration approval of generics.

The researchers estimate that the cost of entry averages $3.2 million per drug, including research and development and various government fees. The approval process can take up to four years. To the extent that entry could have undermined the cartel’s alleged power, lower entry costs and speedier approvals could have reduced drug prices. The researchers estimate that lowering entry costs by $800,000 per application would have saved consumers $374 million during the period of alleged price-fixing. Reducing delays would have had a bigger payoff: a one-year reduction in time to approval would have led to savings of $596 million.

The researchers caution that assessing either of these policy levers is complex. For example, reducing fees “may draw resources away from other oversight activities,” and speeding up approvals “may require additional staff (or, again, result in lax enforcement).”