Temporary Layoffs and the Dynamics of Cyclical Unemployment 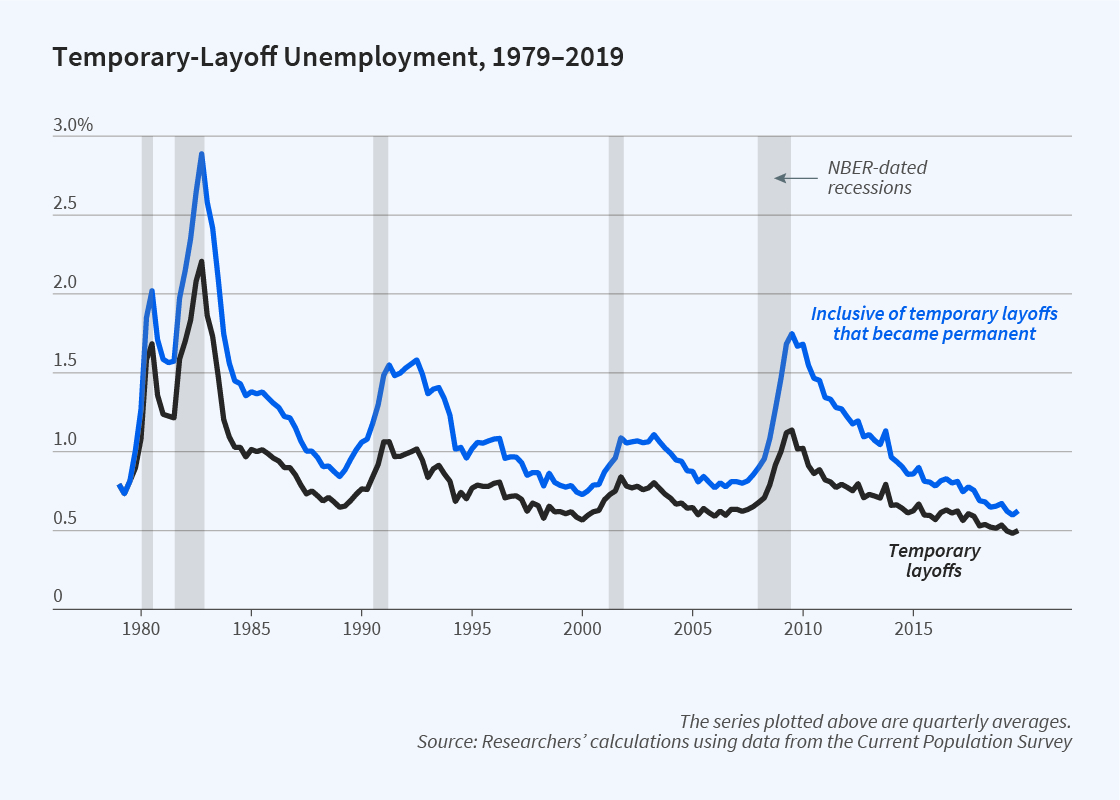 In Temporary Layoffs, Loss-of-Recall and Cyclical Unemployment Dynamics (NBER Working Paper 30134), Mark Gertler, Christopher K. Huckfeldt, and Antonella Trigari study workers who expected to be recalled when they entered unemployment, but who never were. They find that temporarily laid off workers who at some point learned that they would not be recalled account for a sizeable fraction of the long-term unemployed in post-WWII recessions.

Temporary layoffs that turn into permanent job loss are an important contributor to overall unemployment.

The researchers develop a framework for analyzing hiring and layoff decisions. Firms experience shocks in their costs of production, which leads to changes in their labor demand. They can adjust their labor forces with temporary and permanent layoffs, recalls, periodic wage renegotiation, and new hires from among the jobless unemployed. The researchers calibrate this model using data from the monthly Current Population Survey (CPS) between 1978 and 2019, focusing on the probability of worker transitions between employment, temporary-layoff unemployment, and jobless unemployment. This model successfully reproduces labor market dynamics in the CPS.

Flows from temporary layoff to jobless unemployment can slow the pace of economic recovery following a downturn. The researchers find that if there were no transitions from temporary to permanent layoff — if all layoffs remained temporary — then during a typical downturn, the unemployment rate would peak slightly earlier and it would be several tenths of a percent lower throughout the recovery. They attribute this to a reduction in firms’ costs of hiring when they rehire laid off workers rather than conduct a search for a new employee.

Interventions like the Paycheck Protection Program (PPP) during the COVID recession discouraged firms from permanently letting workers go, and likely decreased the number of individuals moving from temporary layoffs to jobless unemployment. To assess the impact of this program, the researchers create a series of “lockdown shocks,” with a growing fraction of workers laid off, as well as a “social distancing” shock that reduced the productivity of labor and capital. The productivity reductions were applied in April 2020, September 2020, and January 2021. In these scenarios, the PPP — modeled as a subsidy to firms — reduced unemployment by cutting the number of workers who transitioned from temporary layoffs to jobless unemployment. The simulations suggest that the PPP program lowered the unemployment rate by about 2 percentage points over the first six months of the pandemic, and by roughly 1 percent for the next twelve months.