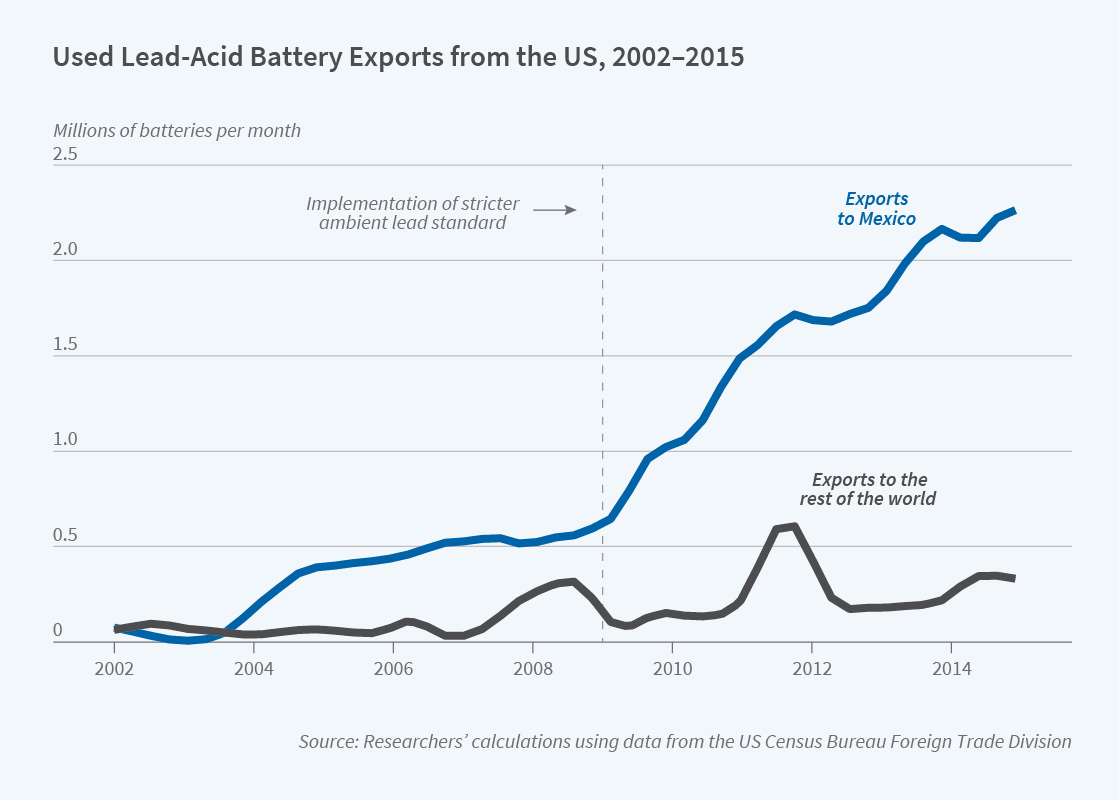 A key concern in environmental policy debates is that tighter pollution regulations in richer countries may lead to the relocation of dirty production activities to poorer countries with weaker regulations. This could have adverse health effects on the “pollution haven” countries’ populations.

In North-South Displacement Effects of Environmental Regulation: The Case of Battery Recycling (NBER Working Paper 29146), Shinsuke Tanaka, Kensuke Teshima, and Eric Verhoogen find that the tightening of airborne lead standards in the United States in 2009 was associated with a shift in recycling of used lead-acid batteries from the US to Mexico and a decline in infant health near Mexican battery-recycling plants.

Battery recycling is well-suited to empirical study. First, the industry is an intensive emitter of lead, a particularly noxious pollutant linked to retarded fetal growth, lower IQ and educational achievement, and other adverse outcomes. Second, a sharp regulatory change occurred in 2009 when the US tightened the National Ambient Air Quality Standard for lead by a factor of 10 while the standard in Mexico remained unchanged. Third, there are reliable data that permit tracking of the relocation of battery recycling.

The researchers focus on the locations of battery-recycling plants in the US and on ambient lead levels at monitoring stations nearby, on used lead-acid battery (ULAB) trade flows from the US to Mexico, on the locations of ULAB recycling plants in Mexico, and on the birthweight of infants born to mothers who live near these plants. Birthweight is a particularly well-measured and fast-responding health outcome with regard to lead pollution.

When the US air-quality standard was tightened, ambient lead concentrations around US battery-recycling plants where the new regulation was binding fell sharply. At the same time, ULAB exports from the US to Mexico rose markedly. After having remained roughly constant between 2005 and 2008, battery exports rose fourfold between January 2009 and December 2014.

Relative to similar industries, the growth of value added and output in Mexican battery-recycling plants was sharply higher in 2008–13 than in 2003–08. Value added rose by 62.2 percent over the five-year period from 2003–08 and by 243.2 percent from 2008–13. Between 2008 and 2013, the incidence of low-birthweight infants increased significantly within a two-mile radius of Mexican battery-recycling plants relative to areas two to four miles away. Health effects were concentrated among mothers in hospitals run by the Mexican Ministry of Health. These women tended to be of lower socioeconomic status than mothers in other hospital types. The researchers conclude that the tightening of the US lead regulation induced the relocation of battery recycling and caused negative health spillovers in Mexico.