The Disproportionate Death of Ukrainians in the Soviet Great Famine 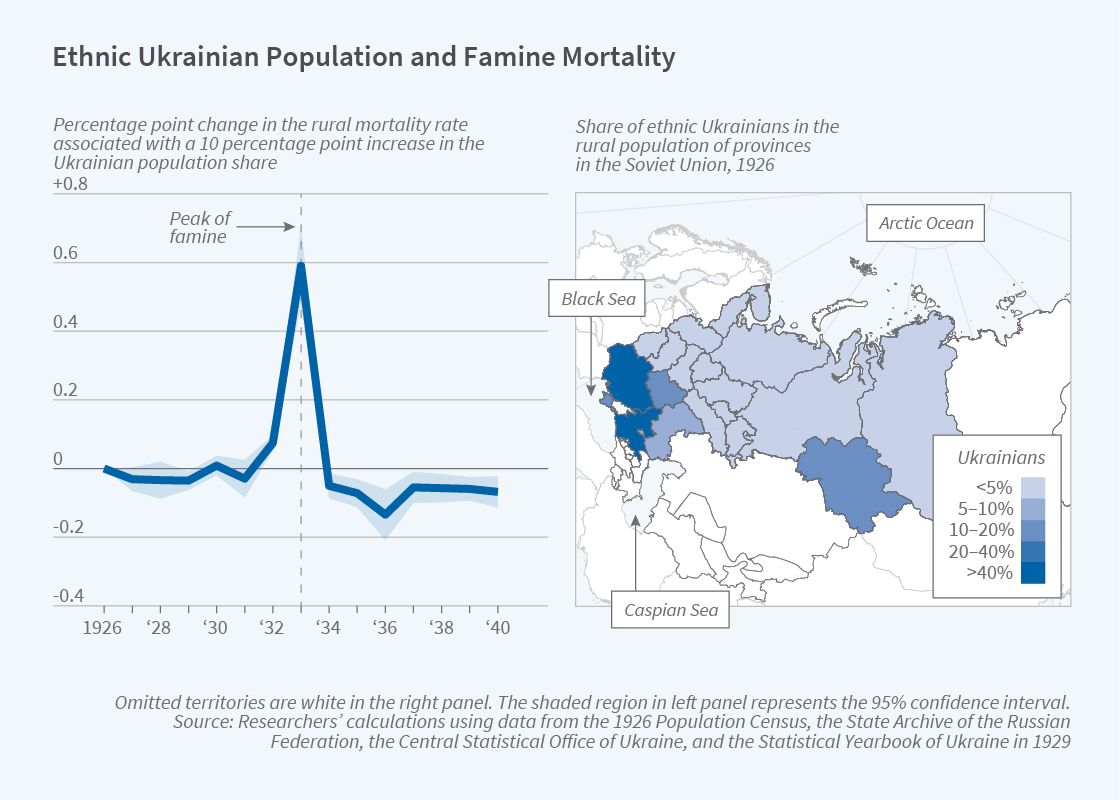 Government policies motivated by ethnic bias can account for up to 92 percent of the deaths of ethnic Ukrainians living in Ukraine at the time.

When harvests failed in the Soviet Union in the early 1930s, ethnic Ukrainians experienced significantly higher mortality than the majority Russian population. Andrei Markevich, Natalya Naumenko, and Nancy Qian discover in The Political-Economic Causes of the Soviet Great Famine, 1932–33 (NBER Working Paper 29089) that this was due in large part to intentionally biased economic policies of the central government.

Drawing from archival sources, including the Soviet census, planning documents, and declassified secret police records, the researchers construct a dataset of demographic, economic, political, historical, geographical, and climatic factors for the years 1922–40. Their sample includes data from 19 provinces in the three most populous republics of the Soviet Union — Belarus, Russia, and Ukraine — comprising 84 percent of the Soviet population and 88 percent of the population in grain-producing areas. The researchers use this information, along with rich data on the ethnic makeup of many districts, to examine the effects of the famine and centralized planning decisions on ethnic Ukrainians and on those of other ethnicities in Ukraine and elsewhere in the Soviet Union.

In 1926, Russians comprised 53 percent of the Soviet population, while Ukrainians, the largest ethnic minority, made up 21 percent. Yet between 30 and 45 percent of the 10.8 million victims of the Soviet Great Famine were ethnic Ukrainians. The researchers estimate that a 10 percent increase in the ethnic Ukrainian share of the population in a province was associated with a 0.51 percentage point increase in the famine mortality rate.

They find that provinces with a greater Ukrainian population share experienced a greater increase in mortality between the pre-famine and famine years. This pattern emerges even when controlling for factors such as weather, food production, and urbanization, as well as dekulakization — the policy of eliminating wealthy peasants who resisted collectivization of farms — and the drop in livestock a few years prior to the famine, which could have affected grain production and the ability to survive harvest shortfalls. Further, the increase in Ukrainian mortality occurred only during the famine, and only in ethnic Ukrainian-majority areas, even those outside Ukraine proper.

The Bolsheviks’ need to control grain production led to their repressing Ukrainians more than other groups. Ethnic Ukrainian peasants played a central role in grain production. They were the largest ethnic group in designated “grain-surplus” areas, where production far exceeded subsistence levels during non-famine years. They also had a strong group identity, a history of confrontation with the Bolsheviks during the civil war and they had resisted Soviet efforts to control agriculture, which constituted nearly half of GDP. By repressing them, Moscow advanced its efforts to control rural grain production. Centrally planned policies known to have contributed to famine mortality, such as the withholding of tractors, were more intensely enforced in regions with a greater number of ethnic Ukrainians.

The Causes of Ukrainian Famine Mortality, 1932-33