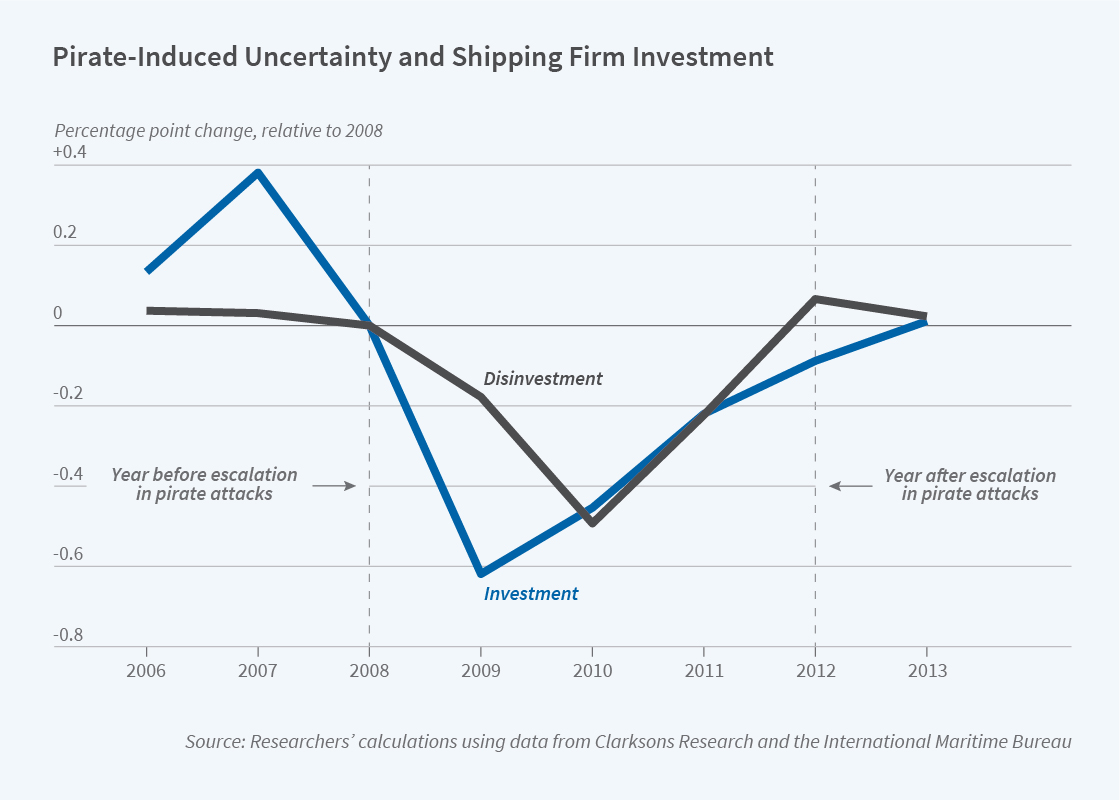 In a period of high uncertainty, shipping lines slowed the upgrading of their fleets and concentrated on a narrower and less-productive asset mix.

A wave of Somali pirate attacks between 2009 and 2011 created substantial uncertainty for cargo shippers using the Suez Canal. In those three years, companies with ships sized to use the canal reduced their investment in new vessels by an estimated 38 percent, and reduced vessel retirements by 18 percent. The result was a slowdown in the rate of technological upgrading in the fleets of Panamax bulkers and Long Range 2 tankers. This slowdown occurred during a period when, while the risk of attack was high, so were the returns, because competition was attenuated.

In Delayed Creative Destruction: How Uncertainty Shapes Corporate Assets (NBER Working Paper 28971), Murillo Campello, Gaurav Kankanhalli, and Hyunseob Kim find that the Somali episode was not an isolated event in the shipping industry. They study nearly 4,000 shipping firms in 109 nations over the period from 2006 to 2019, and find that periods of high uncertainty cause companies to slow the upgrading of their fleets and concentrate them in fewer vessel types. This can make the firms less productive and reduce their market value.

The investment effect of rising uncertainty depends crucially on the liquidity of used-ship markets. Uncertainty has far less effect in a liquid market, in which companies can easily buy or sell used ships in case they have underestimated or overestimated demand. The Somali piracy period illustrates that the reduction in investment and retirements is concentrated in subsectors specifically affected by uncertainty, rather than spread across the shipping industry as a whole.

The same dynamic also plays out in the disposal of old vessels. A rise of one standard deviation in uncertainty causes company owners to trim sales or demolitions of ships by 57 percent when the market for used vessels is illiquid; sales or demolitions fall only 36 percent when the market is liquid. Elevated uncertainty hampers the process of creative destruction through which shippers scrap old ships and replace them with technologically advanced new ones.

The researchers also find that companies faced with high uncertainty consolidate their ship holdings into fewer subsectors. The average age of the fleet rises and firms hold on to smaller, less fuel-efficient, and less-productive vessels. Analysis of a subsample of 76 shipping firms finds that high uncertainty also reduces market value for those in low-liquidity sectors. The share prices for these firms drop 7 to 9 percent relative to matched portfolios in the month following an uptick in uncertainty, which is consistent with the reduced productivity of their fleets.