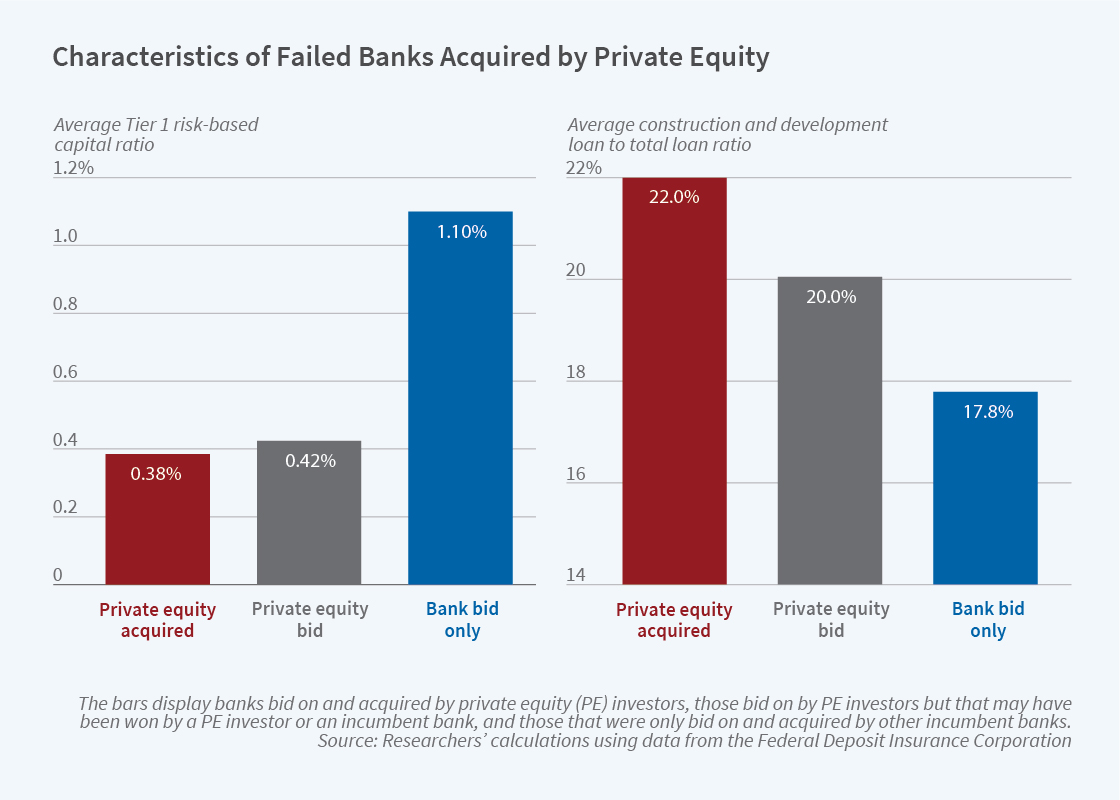 When a US bank fails, the Federal Deposit Insurance Corporation (FDIC) generates a list of potential bidders who might be interested in acquiring it. They submit sealed bids for the failed bank, and the FDIC chooses the bid that will resolve the bank failure at the lowest cost for the FDIC’s Deposit Insurance Fund.

Historically, private investors had generally been barred from bidding on failed banks because they were not chartered banks, and there was no formal process in place to allow them to bid. In 2008, the Office of the Comptroller of the Currency began making it easier for nonbank private equity investors to participate in failed-bank auctions by offering what are called “shelf” charters, provided they met a variety of regulatory requirements. In Private Equity and Financial Stability: Evidence from Failed Bank Resolution in the Crisis (NBER Working Paper 28751), Emily Johnston-Ross, Song Ma, and Manju Puri estimate that private equity bidders reduced Deposit Insurance Fund costs by $3.6 billion, about 5 percent of the overall $73 billion cost generated by failed banks during the financial crisis. A total of 482 bank failures were resolved by the FDIC in that period. Private equity investors purchased 62 of them.

Generally operating in consortia staffed by experienced bankers specializing in the management of turnarounds and troubled and distressed assets, private equity investors tended to acquire banks that were too risky for purchase by incumbent banks. Data on the patterns of bids for failed banks suggest that traditional banks limited their bidding to healthier failed banks and that private equity investors were less active in that segment. Private equity purchasers assumed more risk by purchasing larger, less capitalized, less profitable banks. They thus injected new capital in regions where banks were on average in deeper distress. When multiple banks failed in the same region, a failed bank was more likely to be acquired by a private equity investor. Though a neighboring bank is often considered the most likely acquirer of a failed bank, the researchers report, other banks in the same region may be weakened by the same economic stressors that caused a particular bank to fail, and they may not be able to bid for it.

How did private equity-acquired failed banks perform after the resolution? Using FDIC data on bank failures, bids, acquisitions, Deposit Insurance Fund cost analyses, and how loans acquired from a failed bank performed over time, the researchers constructed a quasi-random sample of similar banks so that they could compare the effects of acquisition by traditional banks to the effects of acquisition by private equity. Their sample included only failed banks for which the winning bid was within 5 percent of the losing bid and both types of purchasers submitted bids.

The researchers conclude that private equity investors filled “the capital gap in scenarios where the natural local bank buyers are themselves distressed or capital constrained,” and helped to stabilize the financial system in the years that followed the Great Recession.

Private Equity and Financial Stability: Evidence from Failed Bank Resolution in the Crisis