Explaining the Historical Rise of US Research Universities 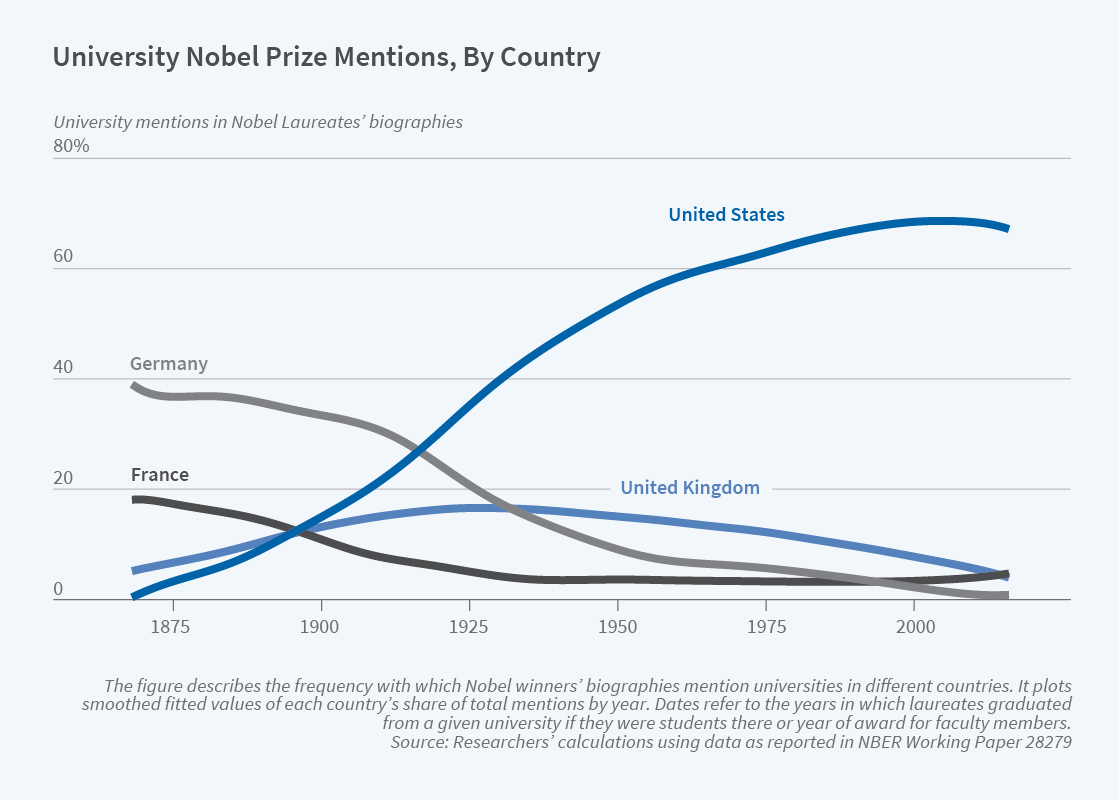 The United States had about 900 colleges before the Civil War. By 1875, educational attainment exceeded that in any European nation, but the country had no top-tier research universities. Yet over the next half century, US research universities not only emerged, but achieved global dominance. In 1920, for example, there were more mentions of US universities than German universities — long the global research leaders — in the biographies of Nobel Prize winners.

In Why Does the US Have the Best Research Universities? Incentives, Resources, and Virtuous Circles (NBER Working Paper 28279), W. Bentley MacLeod and Miguel Urquiola explain how American higher education in the late nineteenth century was remodeled when a relatively free market encountered changing student demand. New universities specializing in advanced instruction and research attracted both funding and students. Today, the most selective US research universities spend about $150,000 per student, six times the national average.

In the first century after American independence, US students generally preferred colleges that were close to home, and schools were differentiated by religious affiliation. The curricula emphasized Latin, Greek, logic, rhetoric, mathematics, physical sciences, and ethics and politics. Open enrollment meant that anyone who could afford the tuition could attend, and colleges grew by adding more students. There were few professors, and they were paid relatively little. Some professors conducted research, but it was neither emphasized nor rewarded.

Attempts at reform only succeeded decisively when private donors created Cornell University in 1865 and Johns Hopkins University in 1876. Both schools attracted students by expanding curricula, offering specialized instruction, and focusing on graduate education. MIT, Stanford, the University of Chicago, the University of California, Berkeley, and various land-grant state universities were other early entrants. Well-established institutions, such as Harvard and Columbia, responded to the competition by creating their own specialized departments and professional schools.

In Europe, where higher education was largely funded by governments, the entry of new universities was discouraged. While US schools created nationwide faculty and student sorting systems in their competition for research talent, some European countries, including Germany, focused their resources on preserving equality across schools. Many European faculty salaries were determined by rank and seniority rather than the internal “up-or-out” evaluation based on research quality that came to prevail in the US.

Instructors qualified to teach new, specialized curricula were in short supply in the US, and they were difficult to identify. Schools competed for talent by offering higher salaries, reduced teaching loads, sabbaticals, and, beginning at Princeton in the 1920s, tenure. The researchers suggest that tenure increased institutional research productivity in part because tenured faculty do not need to protect their jobs by avoiding hiring more talented colleagues.

As the US supply of graduate specialists grew, professors founded associations like the American Chemical Society (1877) and the American Historical Association (1884). They began publishing specialty journals that reviewed the quality of research before publication.

Growing numbers of students with open enrollment meant that less-prepared students began attending college, threatening colleges’ ability to cater to the elites who had been their traditional customers. In 1919, Columbia implemented selective admissions. It capped its class size, required personal data on application forms, and denied admission without explanation. This, along with the use of standardized tests like the SAT in 1926, gradually created academically stronger student bodies. Early adopters of selective admissions developed supportive alumni networks that donated to them, further advancing research and specialized instruction. These institutions were well positioned to garner an outsized portion of the large increase in federal research funding that began in the 1960s.

Why Does the U.S. Have the Best Research Universities? Incentives, Resources, and Virtuous Circles