The Return to Impact Investing in Developing Countries 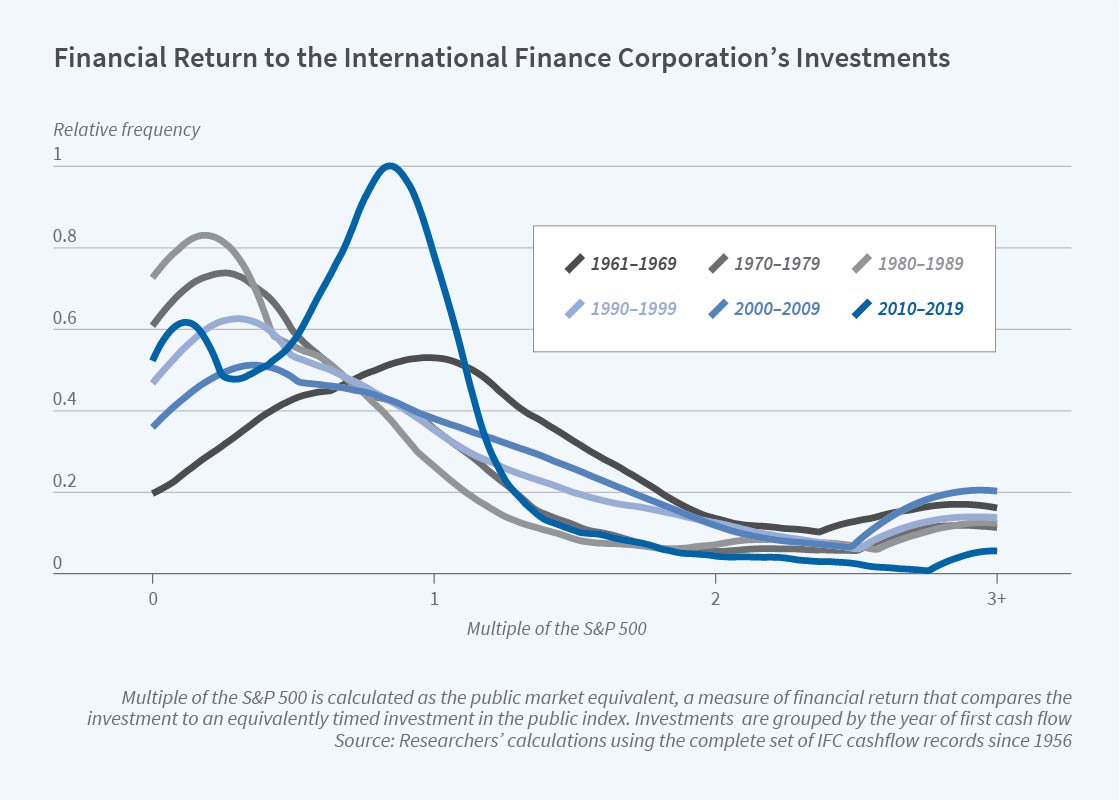 Over six decades, the International Finance Corporation has earned higher returns than the S&P 500 on its equity portfolio.

The oldest and most diversified international impact investor has earned superior returns by deploying its funds in emerging-market and developing nations, according to findings reported in Long-Run Returns to Impact Investing in Emerging Markets and Developing Economies (NBER Working Paper 27870).

Over six decades, the International Finance Corporation (IFC) has invested in private equity and venture capital in 130 such countries. The portfolio has outperformed the US stock market over this period. At the end of 2019, an investor who had earned returns on the IFC’s portfolio since 1961 would have 15 percent more wealth than one who invested the same initial amount in the S&P 500. While the IFC, as a member of the World Bank Group, may have certain investment advantages over other market participants, its record offers insights for international investors who want to achieve social and environmental goals while receiving a strong financial return.

The study by Shawn Cole, Martin Melecky, Florian Mölders, and Tristan Reed offers new data on the long-standing question of whether investors can have a social or environmental impact only if they accept lower risk-adjusted returns. The researchers find that imperfect integration of international capital markets creates attractive investment opportunities in countries with less-developed banking systems and capital controls, thereby creating scope for both financial profit and social impact. They define an impact investor as one who “provides capital to eligible projects that would not have otherwise received funding due to imperfectly integrated financial markets.”

The IFC was founded in 1956 with a World Bank mandate to encourage growth in productive private enterprise, especially in less-developed areas. It made its first loan in 1957 and its first equity investment in 1961. Its portfolio includes investments in more countries than are included in the MSCI Emerging Markets index, which is heavily concentrated in large economies like China and Brazil. The IFC also has a higher share of investment in very poor nations. An investor holding the IFC’s equity portfolio since 1988, the year the MSCI Emerging Markets Index was launched, would have 30 percent more wealth at the end of 2019 than an investor who started with an equal-sized investment in 1988, but who held the MSCI Index instead.

The researchers measure the performance of the IFC portfolio and each individual investment by computing its public market equivalent (PME), a measure of financial return that compares the investment to an equivalently timed investment in the public index. The PME is preferred to alternative measures of return — such as the internal rate of return and multiple of money — because the PME accounts for the value of payouts that are not perfectly correlated with the market. The researchers consider both the S&P 500 Index and the MSCI Emerging Markets Index as potential comparisons.

The study also examines the returns to individual IFC investments, and the factors that are associated with them. Conditions within particular countries, such as political risk, corruption, and ease of doing business, are weak predictors of future returns. Macroeconomic conditions over the course of the investment are positively associated with returns, as are changes in the host country’s sovereign risk over the investment period. Each 1 percent rise in annual GDP growth over the life of a typical investment is associated with a 6.6 percentage point boost in the investment’s return. The researchers conclude that predicting a nation’s macroeconomic performance is therefore a key component of country risk assessment.