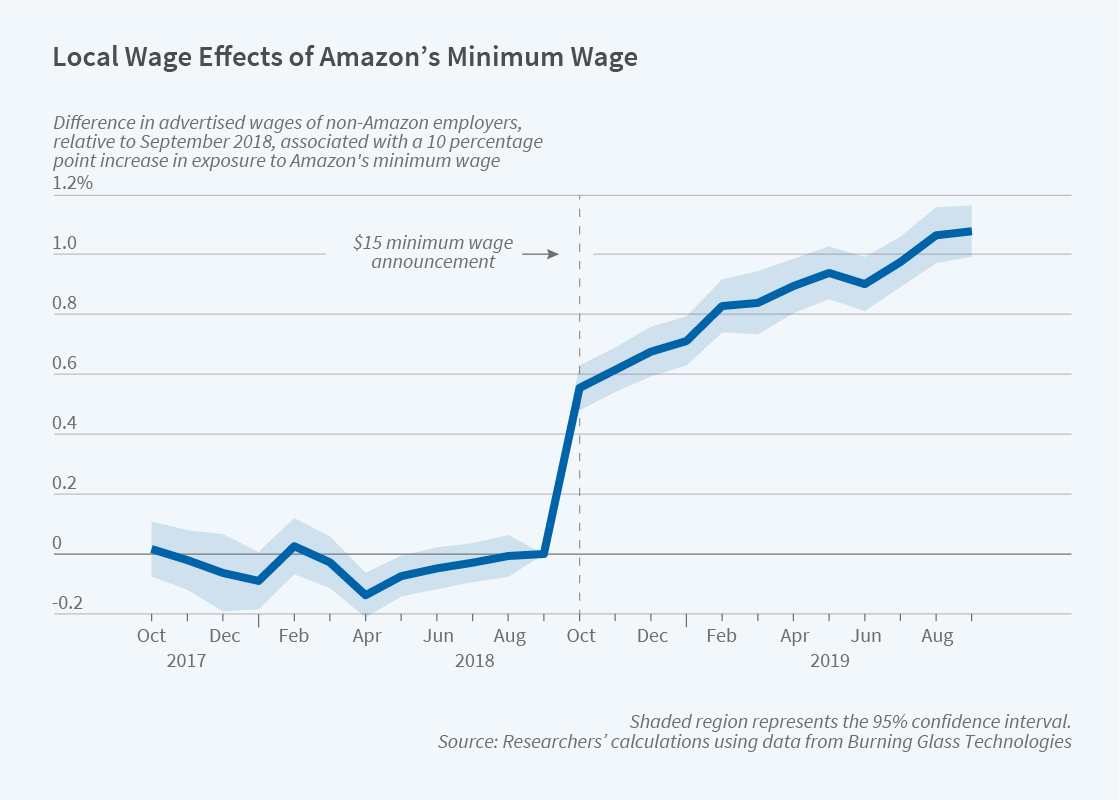 Minimum wage announcements by national firms have striking spillovers to other firms. Many employers responded to Amazon’s $15 minimum wage by matching it.

Between 2014 and 2019, five major national retailers — Amazon, Walmart, Target, CVS, and Costco — implemented company-wide minimum wages. Ellora Derenoncourt, Clemens Noelke, David Weil, and Bledi Taska investigate the impacts of these policies on low-wage workers who are not employed by these firms in Spillover Effects from Voluntary Employer Minimum Wages (NBER Working Paper 29425). They first illustrate their findings using Amazon’s $15 minimum wage, which was announced in October 2018 and took effect that November 1. They then show these patterns generalize to the other large retailer minimum wages.

Utilizing data from approximately 7 million online job postings between February 2014 and February 2020, the researchers find that a 10 percent rise in average Amazon wages is associated with an increase of 2.3 percent in the average advertised wage at non-Amazon firms in the same labor market.

The researchers construct a measure of the extent to which workers in a given job and location are exposed to Amazon’s minimum wage: the fraction of job postings for a job that offered wages below $15 an hour in the year before the announcement. About 56 percent of non-Amazon job postings in the researchers’ data sample promise wages below this threshold. In the announcement month, going from zero to 10 percent exposure to Amazon’s minimum wage is associated with about a 0.6 percent rise in non-Amazon advertised wages. The increase in non-Amazon wages persists for at least a year after the announcement. The researchers find similar wage increases at highly exposed employers after other large retailers announce their minimum wage policies.

The most frequent response of non-Amazon employers to Amazon’s announcement is to raise wages to match the $15 minimum wage. For firms exposed to Amazon’s minimum wage, there is a 17 percentage point increase in the probability of wages being exactly $15 an hour after the announcement. This bunching behavior is also exhibited by employers responding to other retailers’ policy announcements, and it results in a concentration of post-announcement wages around the voluntary minimum wage. Using worker-reported salary data, the researchers confirm that these increases in advertised wages are also reflected in the hourly wages paid to workers.

When large retailers raise minimum wages, there are also small drops in employment. The estimates range from a 0.4 percent to a 1.3 percent decline in employment at firms other than the major retailer when Amazon’s or a similar firm’s minimum wage raises other firms’ wages by 10 percent. These estimated employment effects are comparable to some recent estimates in the minimum wage literature.

Wage spillover effects are larger in areas with lower state and local minimum wages, as well as for jobs that are geographically closer to large retailers. Labor market tightness does not appear to affect the extent of labor market spillovers, suggesting that other factors, such as norms or market power, may influence firms’ wage-setting decisions.