What the COVID-19 Pandemic Meant for Public Schools 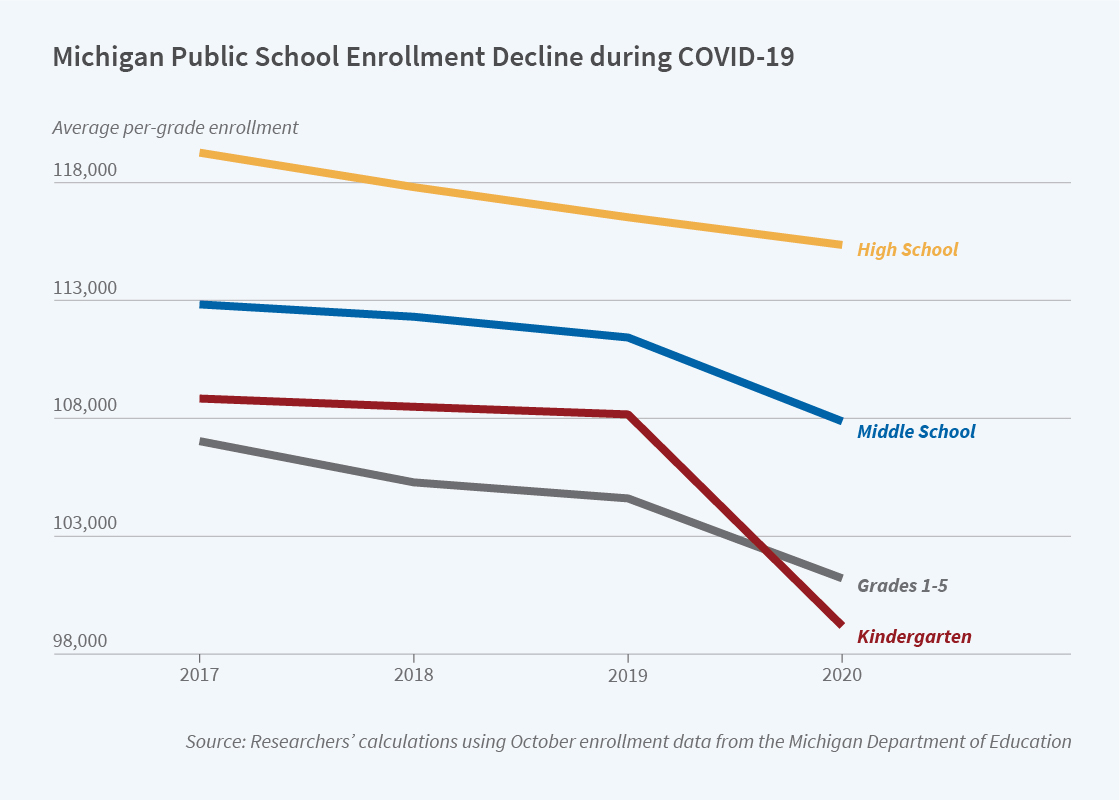 Total enrollment in autumn, 2020, was down 3 percent, with the sharpest declines in lower grades, especially kindergarten, as families shifted to options such as homeschooling and private schools.

Public-school enrollment has fallen during the COVID-19 pandemic as parents have shifted their children to homeschooling and private schools.

In The Pandemic’s Effect on Demand for Public Schools, Homeschooling, and Private Schools (NBER Working Paper 29262), Tareena Musaddiq, Kevin M. Stange, Andrew Bacher-Hicks, and Joshua Goodman find that the impact varies across grades and across racial and economic groups. Results also differ depending on whether public schools offered instruction fully in class, remotely, or in a hybrid model. The researchers analyze student-level data from Michigan and nationally representative surveys from the US Census.

In Michigan in the autumn of 2020, kindergarten enrollment dropped 10 percent from the previous year; for all grades the decline averaged 3 percent. Among previous public-school students, the percentage of those leaving for alternatives was highest in the lower grades. Before the pandemic, 4 percent of the state’s public elementary students did not re-enroll the following year; in the autumn of 2020, that rate was over 6 percent. The share of kindergarteners not returning for first grade almost doubled, from 4 to nearly 8 percent. Exit rates remained elevated through the eighth grade. More high school students returned to public schools than in the past.

Most Michigan parents who pulled their children from public schools opted to teach them at home, with a smaller share shifting them to private schools. This trend was most pronounced in districts that offered a fully in-person or hybrid option; districts that went entirely remote saw more students exiting for private schools.

The national figures from the US Census Household Pulse Survey are similar to those in Michigan. Public school enrollment fell 3 percent, with the lower grades taking the biggest hit. Kindergarten numbers declined by 13 percent, while high schools saw a 0.4 percent increase in enrollment.

Nationwide, 7.3 percent of households reported at least one child being homeschooled in September 2020, up from 4.5 percent before the pandemic. The researchers estimate that a state that offered every student in-person instruction in September 2020 would have seen homeschooling rates more than double.

Among Michigan kindergarteners, enrollment drops were highest among Black students, at 19 percent, and among low-income students, at 11 percent. The researchers note that these communities faced higher rates of COVID-19 cases than the general population.

How the enrollment patterns of 2020 will affect public schools over the longer term is an open question. The researchers outline a scenario in which White and higher-income students, who showed the highest exit rates during the pandemic, are slow to return, while Black and lower-income students who delayed starting school flood into kindergarten and first grade classes.

The Pandemic’s Effect on Demand for Public Schools, Homeschooling, and Private Schools