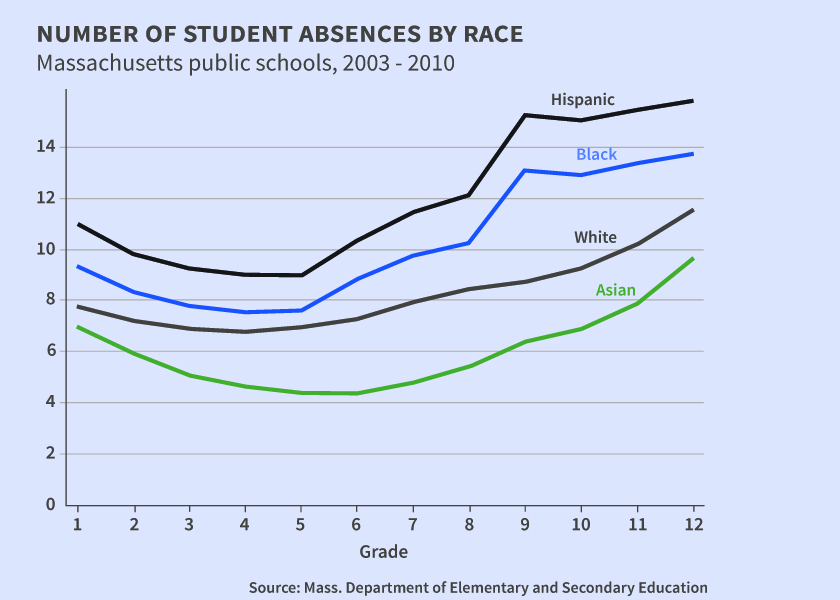 Poor attendance can account for up to a quater of the math achievement gap between poor and non-poor students.

The average American student misses two weeks of school each year. In Flaking Out: Student Absences and Snow Days as Disruptions of Instructional Time (NBER Working Paper No. 20221), Joshua Goodman concludes that poor attendance can account for up to a quarter of the math achievement gap between poor and non-poor students. He finds that while achievement is apparently unaffected by school closures that affect all classes equally, both individual and school achievement decline in the face of the classroom disruption caused by irregular attendance.

Using Massachusetts data, the author compares how absences affect the test performance of particular grades within specific schools, and how they affect the test performance of individual students as they progress through different grades. School closures for rare events like weather, broken heating systems, bomb threats and flooding account for less than one quarter of missed instructional time. At most, they have a small effect on math scores in low-income and primary schools. Student absences have a more significant effect on test scores. A one-day increase in absences in a given grade in a given school decreases math scores by 0.02 standard deviations. An individual student's absence decreases his math score by 0.008 standard deviations. It declines by an additional 0.008 standard deviations if others in his school and grade miss a day.

Although school closures are unrelated to the characteristics of the students who attend them, absences caused by weather do vary with student characteristics. The effect of moderate snow on poor student absences was twice as large as for non-poor students. It was also twice as large for black and Hispanic students as for white and Asian students. The author speculates that this may be caused by dependence on "forms of transportation more likely to fail during snowstorms, such as public transit or low quality cars" or to placing "less value on school attendance." Extremely snowy days, days with 10 or more inches of snow, produce more school closures but no additional absences because students cannot be absent when a school is closed. Previous studies finding that closures had large achievement effects may have mistakenly attributed the effect of individual absences to school closures.

The author concludes that teachers deal well with coordinated disruptions of instructional time but poorly with disruptions that affect different students at different times. The negative effect that absences have on achievement suggests that lengthening the school day or year will not necessarily have the desired effect of raising student performance, but that policies to improve attendance might help.

Flaking Out: Student Absences and Snow Days as Disruptions of Instructional Time