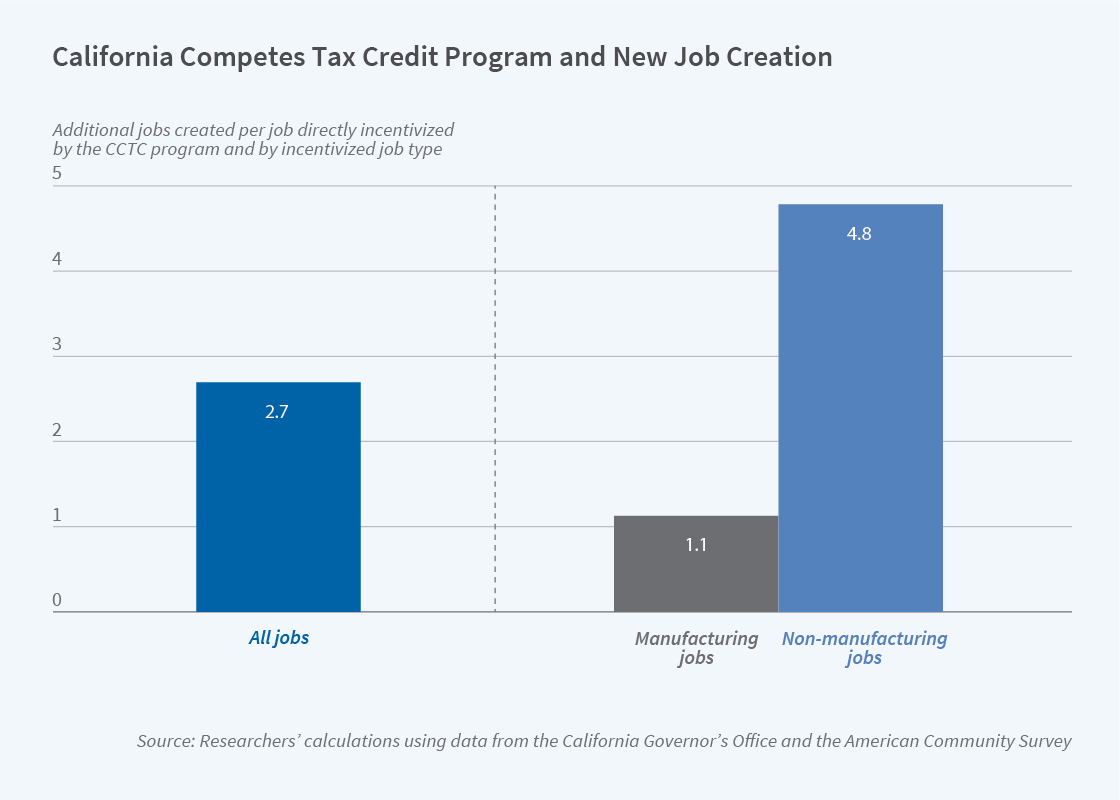 Awarding tax credits based on a combination of formal and discretionary criteria, and strictly monitoring grantee compliance, generated new jobs both at firms receiving credits and at other firms.

Many states and localities offer local subsidies to firms in an effort to create jobs. Whether such local development programs are a cost-effective way of raising employment is a controversial issue, and can result in significant swings in the nature and extent of such subsidies.

Consider California. The state scrapped its enterprise zone program in 2013 after research showed that — like many incentive programs of that type — it produced no net job growth. It was replaced in 2014 with the California Competes Tax Credit (CCTC), a program with several innovative features. It has explicit eligibility thresholds, but once those are met CCTC administrators have broad discretion to direct credits to companies they think have the greatest potential for creating new jobs. The program can also quickly recapture the incentives and pause further credits if hiring goals aren’t met, because the companies are rigorously evaluated every year. The CCTC prioritizes companies located in impoverished areas. Applicants who indicate that at least three-quarters of their new hires will work at least three-quarters of the time in a high-unemployment or high-poverty area get priority in the review process. The program also features preferential review for applicants who can certify that without a subsidy they would either relocate to a new state or close down their California operations.

In Combining Rules and Discretion in Economic Development Policy: Evidence on the Impacts of the California Competes Tax Credit (NBER Working Paper 28594), Matthew Freedman, David Neumark, and Shantanu Khanna find that in its first four years the CCTC was responsible for creating jobs for residents of both low-income and high-income areas and had important multiplier effects.

In the first 12 rounds of the CCTC’s awards, between mid-2014 and mid-2018, an average of 284 firms applied for tax credits during each of three allocation rounds, and on average 82 of them were awarded tax credits in each round. The average award was some $865,000 in credits; about a fifth of the awards were in excess of $1 million. In all, the state handed out some $1.23 billion in tax credits to businesses that pledged to create 124,000 jobs, a cost of $9,900 per incentivized position.

The researchers estimate that in addition to creating the jobs that were directly incentivized by the program, the CCTC had multiplier effects. For every new job subsidized in a particular census tract, they estimate that the tract gained an average 2.5 additional workers. Including these indirectly created jobs, the program’s cost per job created drops to approximately $3,960 per position.

The estimated multiplier effects were not uniform. They were much stronger for nonmanufacturing (4.8 jobs created indirectly) than for manufacturing (1.1 indirect jobs). The program appeared to create more jobs for workers living in more-affluent tracts and those with more highly educated workers. However, increases in employment were experienced by residents of both more- and less-affluent areas.

The researchers note that their calculations may understate or overstate the actual impact of the tax subsidies because the study only counts jobs created within a specific census tract. It misses spillover effects on adjacent communities. Similarly, if new jobs arose in the same tract as the subsidized jobs but were not related to the subsidy program, the study could be overstating the CCTC’s impact.

Combining Rules and Discretion in Economic Development Policy: Evidence on the Impacts of the California Competes Tax Credit