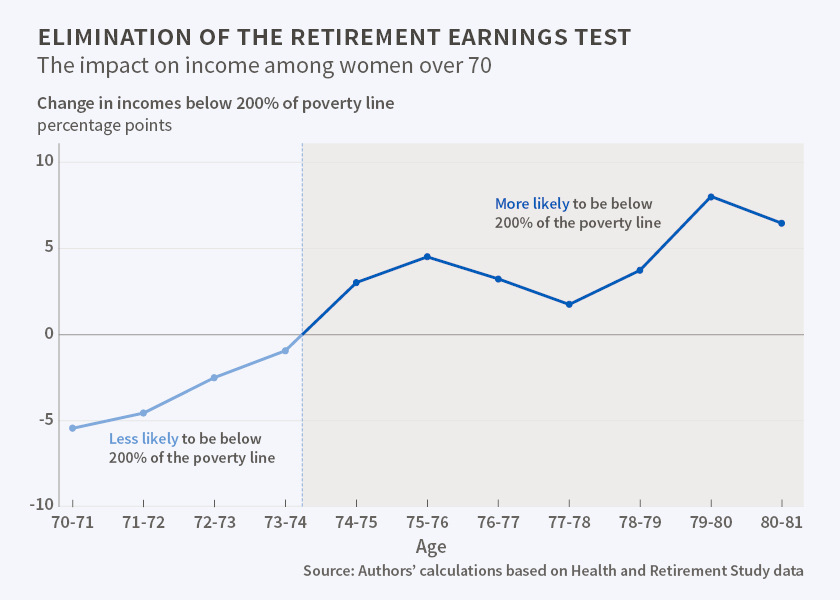 The change encouraged some workers to claim Social Security benefits earlier than they otherwise would have, decreasing their benefits.

At older ages, after individuals no longer have income from labor, this reduction in benefits may translate into lower financial status, especially for women, who tend to live longer, according to the analysis in Does Eliminating the Earnings Test Increase the Incidence of Low Income Among Older Women? (NBER Working Paper 21601).

"The results for the sample first observed at age 70 or older suggest that, as women age into their mid-70s, the effect of lower Social Security benefits from early claiming comes to dominate the effects of higher earnings (and whatever effect those higher earnings had on income from saving)," researchers Theodore Figinski and David Neumark report.

Using Health and Retirement Study data, the authors compare two samples: nearly 3,000 women ages 70 and 71 and nearly 2,000 women ages 75 and 76. The study concentrates on older women because they are more likely than men to have become principally dependent on their Social Security benefits. The authors confirm what previous research has shown: Congress's elimination of the RET in 2000 caused women to claim Social Security benefits months earlier than they otherwise would have. By one estimate, women who were 69 in 2000 claimed about 6.5 to 7.8 months earlier. Rates are even higher for slightly younger women, who could take greater advantage of the changes in the law. Those who were 65 or younger in 2000 claimed 8.2 to 9.6 months earlier. The result: lower annual benefits of about $650 to $800, according to the researchers' estimates.

A similar result is found for the husbands of married women: their husbands also tend to claim benefits earlier, leading to lower annual benefits for the couple of about $1,500.

For a time, the extra income that the early claimants earn from work tends to offset the lower benefits associated with early claiming. Previous research suggests that elimination of the RET through age 69 boosted seniors' earnings by 19 to 20 percent. But that advantage dissipated in later years as earnings declined and seniors continued to receive lower annual Social Security payments because they elected to begin receiving their benefits at an earlier age.

Does Eliminating the Earnings Test Increase the Incidence of Low Income Among Older Women?