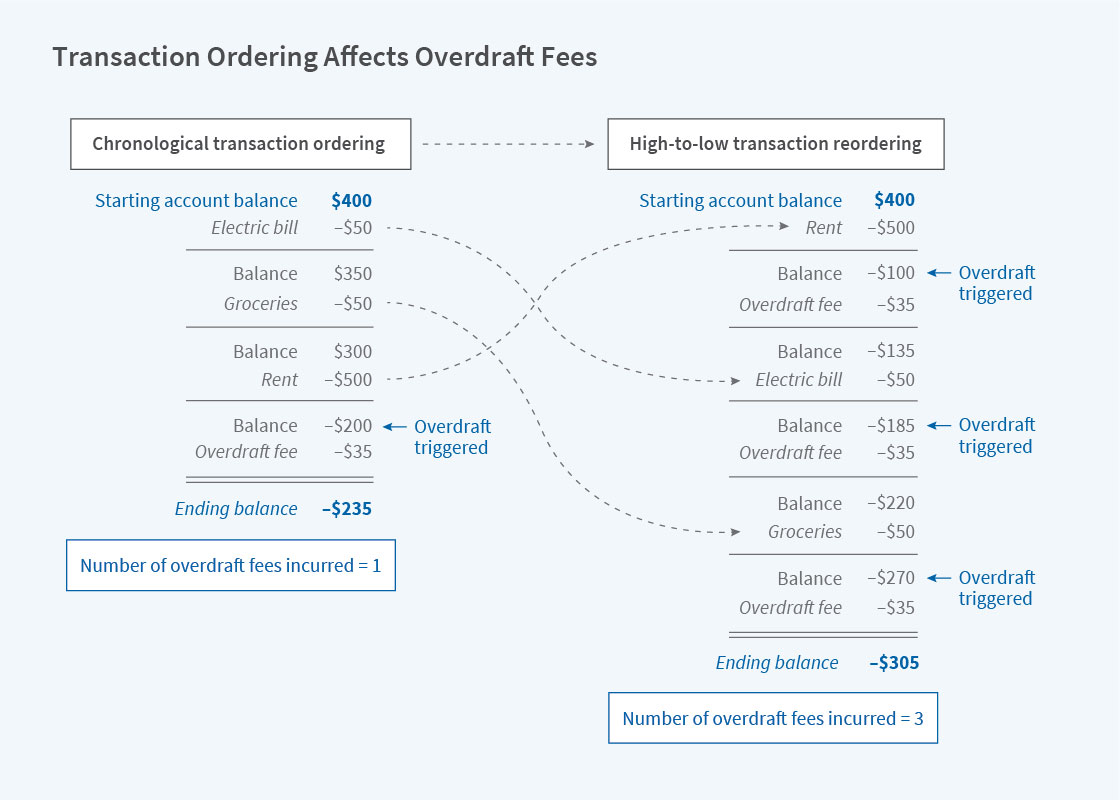 After a ban on high-to-low ordering of debit charges, micro loans from alternative lenders in zip codes with below median income fell by about 16 percent.

Some banks, rather than posting transactions chronologically, post using a high-to-low reordering rule. In this case, transactions of all types are posted in order of their size, from the largest amount to the smallest. This order can generate large and unexpected fees for customers.

Consider an individual who has $500 in a checking account at the beginning of the day, withdraws $110 in cash from an ATM in the morning, writes a check for groceries for $60, has $400 in rent automatically deducted in the afternoon, and later deposits $70. Absent high-to-low reordering, the account ends the day with a zero balance, and incurs few if any overdraft fees.

A new study by Marco Di Maggio, Angela T. Ma, and Emily Williams, In the Red: Overdrafts, Payday Lending and the Underbanked (NBER Working Paper 28242), finds that the fees generated by high-to-low processing may encourage low-income people to substitute the more expensive services of payday lenders and check cashing services for those of traditional banks. Using data from a Pew Charitable Trusts study of the 50 largest US banks from 2012 to 2015, they show that roughly one in five bank branches in each zip code used high-to-low processing, and that those that did were more likely to have branches near payday lenders and check cashers than banks in the same zip code that did not use this processing rule.

The researchers used judgements from 37 lawsuits to identify banks that had been enjoined from using high-to-low reordering. By analyzing data from Clarity, a credit bureau that tracks credit from payday lenders and title lenders, they find that, in the year following these bans, quarterly micro loans from alternative lenders in zip codes with below median income fell by $84 per borrower per quarter, or about 16 percent. Analysis of a representative sample of Equifax borrowers showed that installment loans also fell by about $200 per borrower per quarter, a 6 percent reduction.

Some bank branches depend on overdraft fees for a substantial part of their income. Following a ban on high-to-low reordering, the probability of a bank branch closure increased by as much as 2 percent, and the increase was particularly pronounced in zip codes with fewer branches and lower incomes.

In the Red: Overdrafts, Payday Lending and the Underbanked