Why Do Disability Insurance Enrollments Rise during Recessions?

The number of applications and new awards for Social Security Disability Insurance (SSDI) rose during the Great Recession and earlier economic downturns. Some have speculated that this phenomenon could occur again during the COVID-19 crisis in the wake of pandemic-related job losses.

While the relationship between economic conditions and SSDI awards is well-established, the reasons for it are less clear. One theory is that recessions worsen health, making more individuals medically eligible for SSDI. A second theory is that recessions lower the opportunity cost of applying for SSDI benefits because individuals who become unemployed need not give up a job in order to apply. 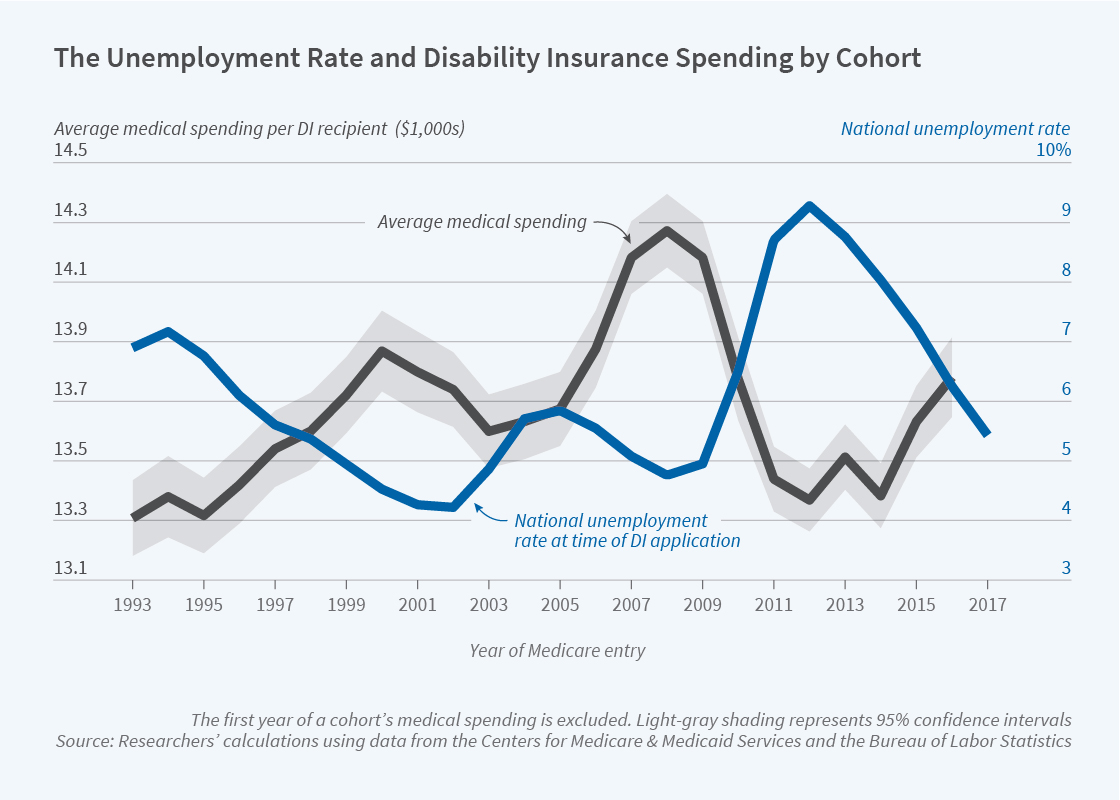 They find that beneficiaries who apply for SSDI during high unemployment subsequently spend less in Medicare than do those who apply when the economy is stronger, as shown in the figure. For each 1 percentage point increase in the unemployment rate, SSDI awards rise by 2.5 percent and the average health care spending of new beneficiaries is 0.5 percent lower. Similarly, individuals who enter DI during high unemployment have a lower mortality rate. The authors note, “this finding, that the larger cohorts entering SSDI in poor economic times are healthier, is new to the literature.”

To explore the role of opportunity cost vs. recession-related changes in health, the authors make use of the fact that the SSDI eligibility criteria become less stringent at ages 50 and 55. Aging across the threshold increases the probability of DI award for individuals with low work capacity, education, and skills, which amounts to a reduction in the opportunity cost of application without a change in underlying health. Pooling across all years, the authors find that the medical expenditures of SSDI recipients entering the program at age 50 are 6 percent lower than those of recipients entering at age 49. This indicates that 50-year-old applicants who are admitted only by virtue of the relaxation of entry rules are healthier than those who would be admitted even under the more stringent rules. The authors also find that unemployment sensitivity is greater among those age 50 and above – this group is disproportionately responsible for the rise in SSDI entry that is due to unemployment fluctuations.

Finally, the authors combine the two sets of results to estimate the relative importance of the health and opportunity cost channels. They first identify the spending patterns of individuals admitted to SSDI only because of the relaxed eligibility criteria as well as those who enroll under poor economic conditions. They then construct a model in which they compare the spending impact of the two groups, inferring any excess spending in the latter group to be evidence of the health channel. Simulations under a variety of assumptions indicate that less than 1 percent of countercyclical SSDI entry is due to the health channel.

In concluding, the authors note that their findings are “inconsistent with the hypothesis that worsening health during recessions drives SSDI take-up. Instead, our findings suggest that SSDI may be helping individuals to smooth consumption in response to temporary, medium-run shocks to employment conditions, a role that contrasts with SSDI’s aim of protecting individuals from permanent shocks to their ability to work. These results suggest that offering other social programs like short-term disability better designed to cover medium-run shocks may do better at targeting the types of shocks that induce fluctuations in enrollment into SSDI during recessions.”

The research reported herein was performed pursuant to grant #RDR18000003 from the US Social Security Administration (SSA) funded as part of the Retirement and Disability Research Consortium. The authors also acknowledge support from the National Institute on Aging (award P01AG005842). The opinions and conclusions expressed are solely those of the authors and do not represent the opinions or policy of NBER, SSA or any agency of the Federal Government. Neither the United States Government nor any agency thereof, nor any of their employees, makes any warranty, express or implied, or assumes any legal liability or responsibility for the accuracy, completeness, or usefulness of the contents of this report. Reference herein to any specific commercial product, process or service by trade name, trademark, manufacturer, or otherwise does not necessarily constitute or imply endorsement, recommendation or favoring by the United States Government or any agency thereof.