The Effects of Sick Pay Mandates

The COVID-19 pandemic has brought renewed attention to the fact that the US does not provide universal access to paid sick leave for employees. Some employers voluntarily provide paid leave, resulting in substantial inequality in coverage across workers by industry, income level, and full- or part-time status. Fewer than half of low-income and part-time employees have access to paid leave. Nearly 50 million workers lack access even to unpaid sick leave, as the Family and Medical Leave Act (FMLA) of 1993, which guarantees this right, exempts part-time employees and employees of small businesses.

While legislation proposing a federal sick pay mandate was first introduced in the US Congress in 2005, such a law has not yet been passed. In the absence of federal action, numerous states and localities have enacted sick pay mandates. The city of San Francisco was the first to do so, in 2007, and there are currently twelve states and two dozen cities and counties with sick pay mandates. These mandates typically stipulate that employees have the right to earn one hour of paid sick leave per 30 to 40 hours worked.

Economic theory suggests that when workers value a mandated benefit such as paid sick leave, the cost of the benefit will be passed on to workers in the form of lower wages, with no effects on employment. However, anti-discrimination and minimum wage laws, as well as social norms, may prevent such wage reductions. In this case, employers might reduce non-mandated benefits or might reduce their demand for workers. Alternatively, sick leave benefits could lead fewer employees to come to work while sick and inhibit the spread of disease in the workplace, raising productivity and wages. 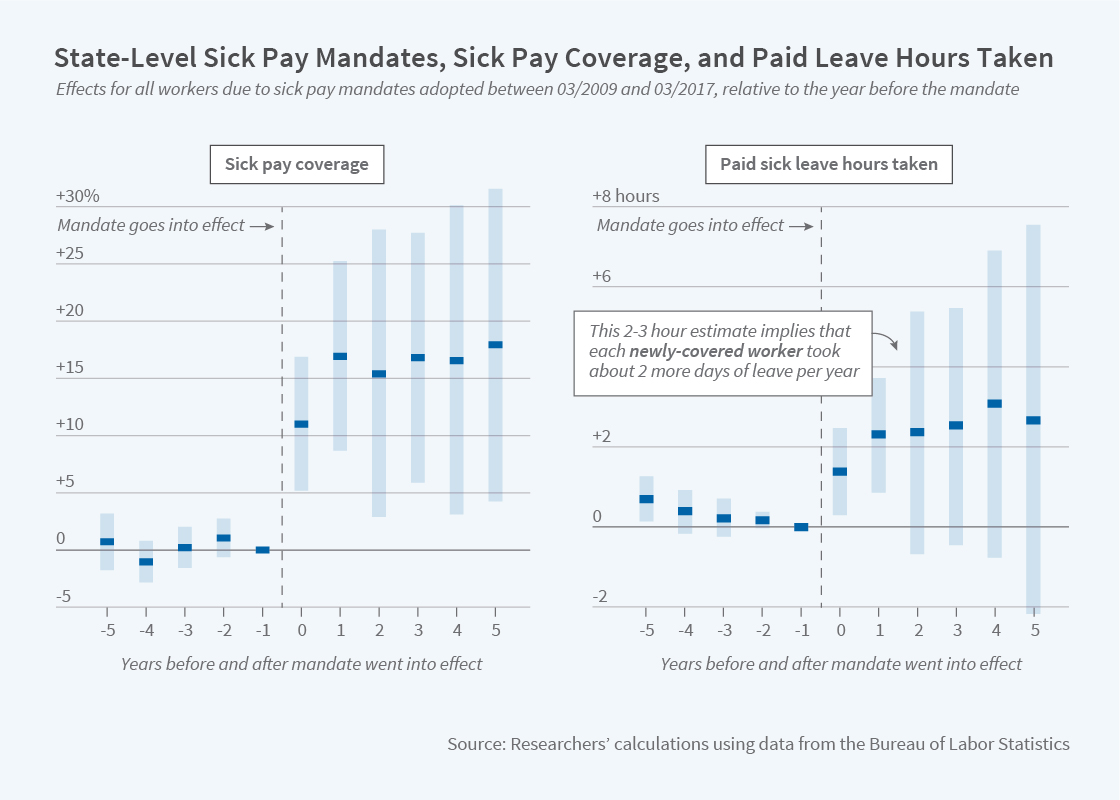 The authors examine the effect of sick pay mandates using data from the National Compensation Survey, which include detailed information on employee compensation and employer costs. They make use of the staggered introduction of state-level mandates over time to assess their effects.

The first finding is that state-level mandates are effective in increasing access to paid sick leave. Following the introduction of a mandate, coverage rises by 13 percentage points, from an initial level of 66 percent. As a result of increased access to paid leave, employees take more sick days. The results suggest that newly-covered employees take almost two additional sick days per year.

Employer sick leave costs rise modestly, by 21 cents per hour for a newly-covered worker. The authors find no evidence that access to paid sick leave crowds out non-mandated benefits such as paid vacation or holidays. Similarly, there is no evidence that employers reduce the provision of health, dental, or disability insurance.

As the authors note, "the US is a country with one of the least generous paid leave systems among all OECD countries." Sick pay mandates that require employers to offer this benefit to their employees represent one policy option to increase access to paid leave. The authors find that the introduction of a sick pay mandate leads to a significant increase in access to paid leave and an increase in the number of sick days taken. However, their results suggest that roughly one in five workers continue to lack access to this benefit even after a mandate is enacted. Further research is needed to explore whether this coverage gap results from non-compliance, a lack of awareness of the policy, or other factors.

The authors gratefully acknowledge funding from the Robert Wood Johnson Foundation’s Policies for Action Plan (#74921) and the W.E. Upjohn Institute for Employment Research’s Early Career Research Awards program (#17-155-15). This research was conducted with restricted access to Bureau of Labor Statistics (BLS) data. The views expressed here do not necessarily reflect the views of the BLS.