The Effect of Changes in Social Security’s Delayed Retirement Credit

Social Security is the primary source of income for most individuals aged 65 and up. Benefits depend on the worker’s earning history and on the age at which benefits are claimed, which may be as early as age 62. For each month beyond the Full Retirement Age (FRA) that the worker delays claiming (up to age 70), the monthly benefit amount is increased by the Delayed Retirement Credit (DRC). 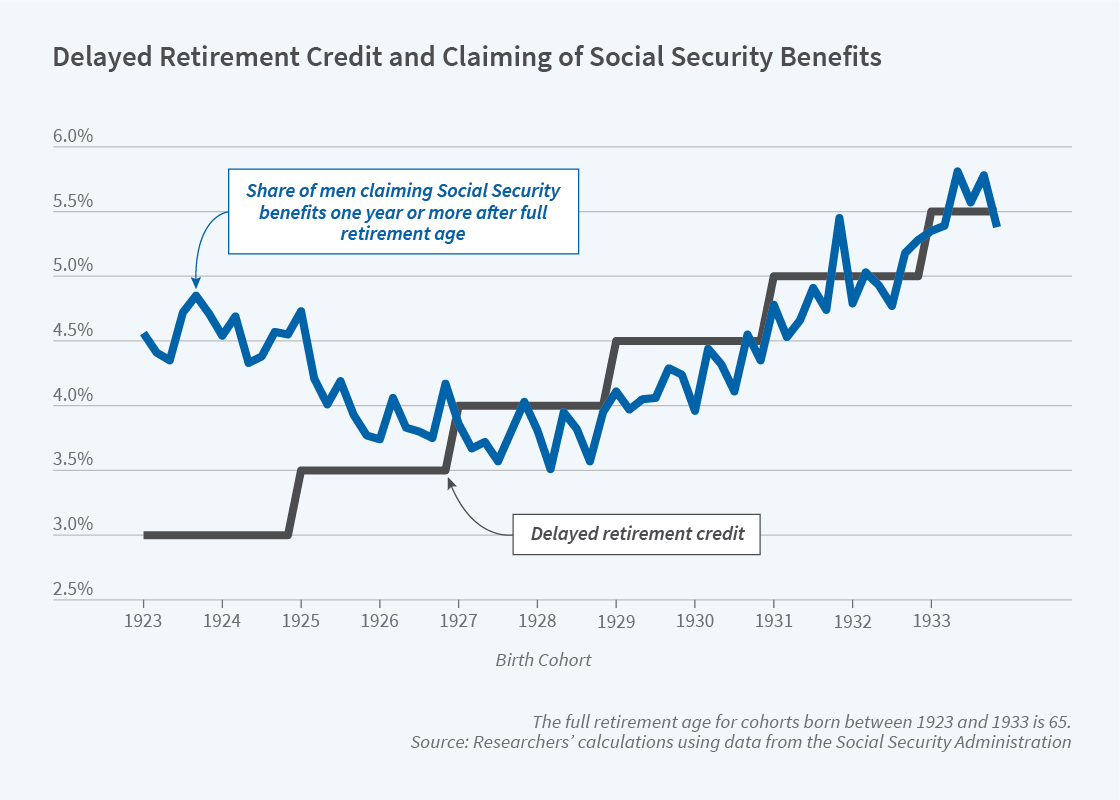 The authors use Social Security administrative data for workers born between 1923 and 1933. They focus on the first five increases in the DRC (from 3.0 to 5.5 percent per year of delay) because later changes coincided with other policies that may have affected claiming behavior, including increases in the FRA (which was age 65 for the cohorts included in this study) and the elimination of the earnings test for earnings received after the FRA. The authors focus on individuals born in the three months before and after each DRC increase, so as to compare individuals who are likely very similar except for the DRC rate. They primarily study men due to the large changes during this time period in women’s employment.

The authors find that a 0.5 percentage point increase in the DRC increases the probability of claiming at least 12 months after the FRA by 0.23 percentage points, or about 5 percent relative to the mean. The effects are particularly strong for the later increase in the DRC (from 4.5 to 5.5 percent). There is suggestive evidence that the response to the DRC increase is bigger for those in the top earnings decile, who have a longer life expectancy and can expect to receive the higher monthly benefits for a longer period of time.

The share of male retired workers who claim at least one year after the FRA is low but trending upward for cohorts affected by the DRC increase, rising from 4.6 percent in the 1923 cohort to 5.6 percent in the 1933 cohort. The authors estimate that 69 percent of this rise can be explained by increases in the DRC.

In discussing their results, the authors note that incomplete knowledge of the DRC could be dampening the response to the DRC increase. They also point out that for these cohorts, the most popular claiming ages were age 62 and the FRA, indicating that other factors besides the DRC may contribute to the low rate of claiming after the FRA.

Interestingly, over the last several years, there has been a substantial increase in the fraction of workers claiming benefits beyond the FRA. A variety of factors could have contributed to this increase in claiming later, including people working longer after experiencing job loss during the Great Recession or individuals reacting to increases in life expectancy; a delayed response to the increase in the DRC is also possible. The authors conclude, “future research should explore the causes along with the consequences of this change given the importance of Social Security benefits to most elderly Americans.”

The research reported herein was performed pursuant to grant #RDR18000003 from the US Social Security Administration (SSA) funded as part of the Retirement and Disability Research Consortium. The opinions and conclusions expressed are solely those of the authors and do not represent the opinions or policy of NBER, SSA or any agency of the Federal Government. Neither the United States Government nor any agency thereof, nor any of their employees, makes any warranty, express or implied, or assumes any legal liability or responsibility for the accuracy, completeness, or usefulness of the contents of this report. Reference herein to any specific commercial product, process or service by trade name, trademark, manufacturer, or otherwise does not necessarily constitute or imply endorsement, recommendation or favoring by the United States Government or any agency thereof. This material is based upon work supported by the National Science Foundation Graduate Research Fellowship Program under Grant No. DGE-1656518. Any opinion, findings, and conclusions or recommendations expressed in this material are those of the authors(s) and do not necessarily reflect the views of the National Science Foundation. The views expressed herein are those of the authors and do not necessarily reflect the views of the National Bureau of Economic Research.