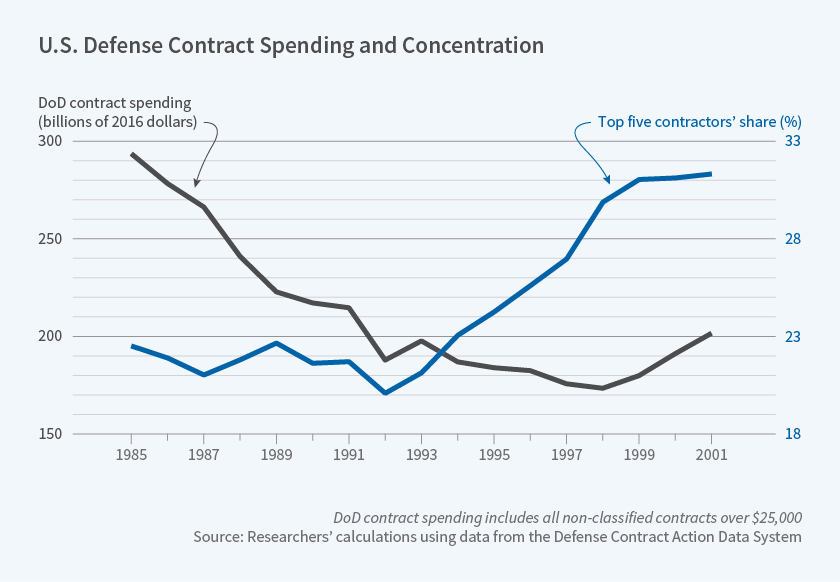 Market concentration in the defense industry has increased in the last three decades, leading to less competitive bidding and to more contracts that require the federal government to pay the contractor for all costs incurred, plus a mark-up.

Consolidation and mergers between firms can create efficiency gains, but it can also enable rent-seeking, since large firms can leverage their dominance to increase their bargaining power vis-à-vis buyers.

The Department of Defense (DoD) awards nearly two-thirds of all federal contract spending. The researchers analyze publicly available data documenting contracting arrangements between the DoD and private contractors, focusing on contracts awarded from 1985 through 2001. They investigate how the major mergers of the mid-1990s affected the bidding process, the types of contracts awarded, and the costs of goods and services provided.

The Defense Contract Action Data System (DCADS) contains administrative records of all non-classified DoD contracts awarded that had a value of $25,000 or more. The researchers look at "contract actions," which include the awarding of a contract as well as subsequent changes if the contract is modified to include additional services. The average contract action was worth $830,000 in 2016 dollars. With roughly 250,000 contract actions annually, the 17-year sample period yielded 4.3 million observations reflecting total spending of more than $3.5 trillion.

The DCADS data do not specify acquisition costs, quantities, or other performance metrics. To analyze those features of federal contracts, the researchers turn to a second, much smaller dataset, Selected Acquisition Reports (SARs), which the DoD submits to Congress to detail the cost, schedule, and performance status of Major Defense Acquisition Programs (MDAPs) — large-scale programs whose research and development is expected to cost more than $480 million, or for which procurement expenditures will exceed $2.79 billion.

During their sample period, mergers produced defense giants such as Lockheed Martin and Northrop Grumman. The share of contract dollars awarded to the five largest DoD contractors rose nearly 45 percent, from 21.7 percent in 1990 to 31.3 percent in 2000.

The researchers note that when the merging firms' strengths are in different products — one might be a leader in aircraft components, another, a top supplier of ammunition — the merger has less impact than in the case where both firms are big players in the same market. They argue that this variation across products can help to identify the causal effect of consolidation on procurement outcomes.

Although increased market concentration meant less competition, the researchers do not find any evidence that it increased total acquisition costs. They suggest that the government’s position as a monopsonistic buyer and the long-term, repetitive nature of the contracting relationship may have kept merged defense firms from exercising their newfound market power to generate additional rents.

The Impact of Industry Consolidation on Government Procurement: Evidence from Department of Defense Contracting