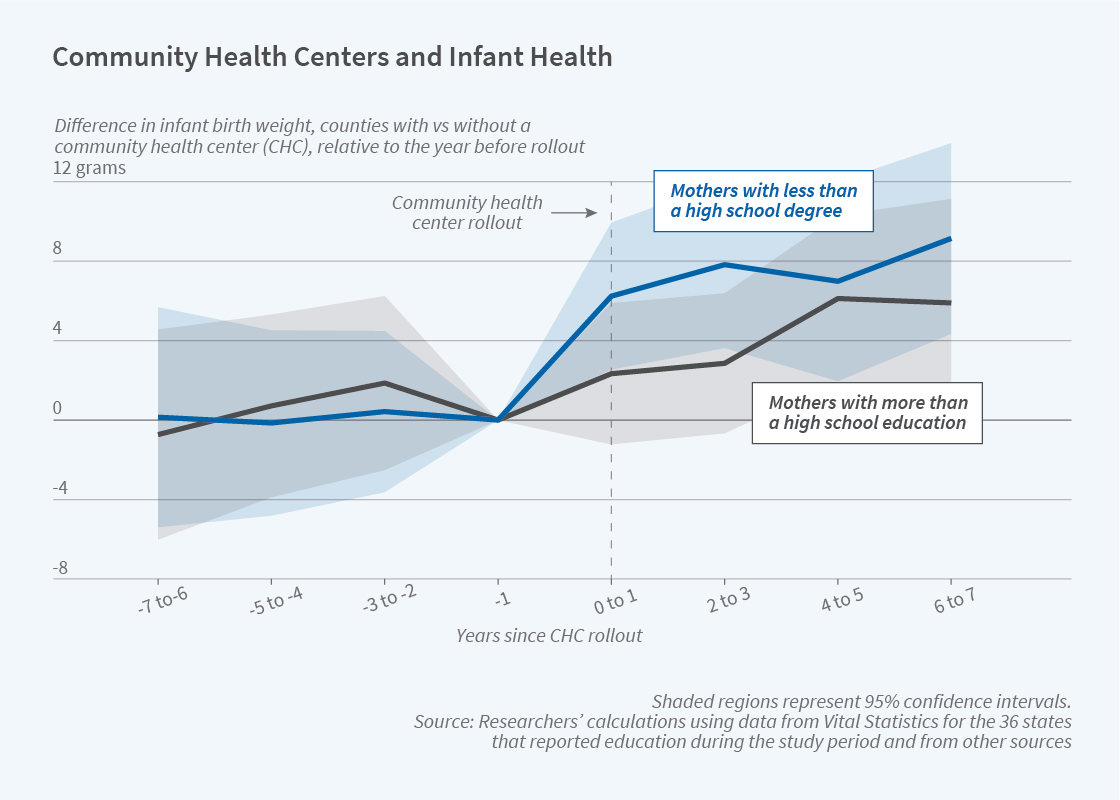 Community health centers (CHCs) offer primary care services at discounted prices in economically disadvantaged communities. The first two CHCs were introduced, as part of the War on Poverty, in Massachusetts and Mississippi in 1965. Over the next 23 years, CHCs were gradually rolled out to medically underserved communities around the country and, by 1988, they were available in 733 counties. The CHC program continued after 1988, but under a new name (federally qualified health centers) and with some modified funding policies.

While CHCs provided all types of primary care, prenatal care was a common form of care. In 1988, CHCs served approximately 6 percent of all pregnant women. This prominent role in the provision of prenatal care raises the question of whether CHCs affected birth outcomes.

To answer this question, researchers Esra Kose, Siobhan M. O’Keefe, and Maria Rosales-Rueda examine changes in average newborn health in counties after the arrival of a CHC. Their analysis, described in Does the Delivery of Primary Health Care Improve Birth Outcomes? Evidence from the Rollout of Community Health Centers (NBER Working Paper 30047), combines Vital Statistics birth records between 1968 and 1988 with information about the locations of CHCs in each year.

As the figure shows, the average birthweight of newborns rose in counties after a CHC opened. This improvement was especially apparent for infants whose mothers lacked a high school degree, consistent with the fact that the typical CHC patient lived in a household with low income and educational attainment.

Overall, the average birthweight in a county increased by 3 grams after a CHC opened. The small magnitude of the change, relative to the average birthweight of 3,300 grams, is not surprising. Most pregnant women were not treated at CHCs, even in counties where they were available, and birth outcomes for those women were not directly affected by CHCs.

How did CHCs achieve these improvements in newborn health? A plausible mechanism is improved preconception and prenatal care among mothers. Evidence from the Survey of Health Services Utilization and Expenditures indicates that CHC openings were associated with a 9 percentage point increase in the likelihood that women without a high school degree reported having a regular source of care. In addition, CHCs led to a 1 percentage point rise in the overall probability that a mother received prenatal care during the first trimester of her pregnancy. This early prenatal care typically includes health screenings and counseling about health behaviors.

Given the effect on prenatal care, the researchers use survey data from the 1979 National Longitudinal Survey of Youth to determine whether CHCs altered health behaviors during pregnancy. They determine that tobacco use fell by 4 percentage points among pregnant women after CHC arrival, with an even larger decline among mothers without a high school degree.

Does the Delivery of Primary Health Care Improve Birth Outcomes? Evidence from the Rollout of Community Health Centers