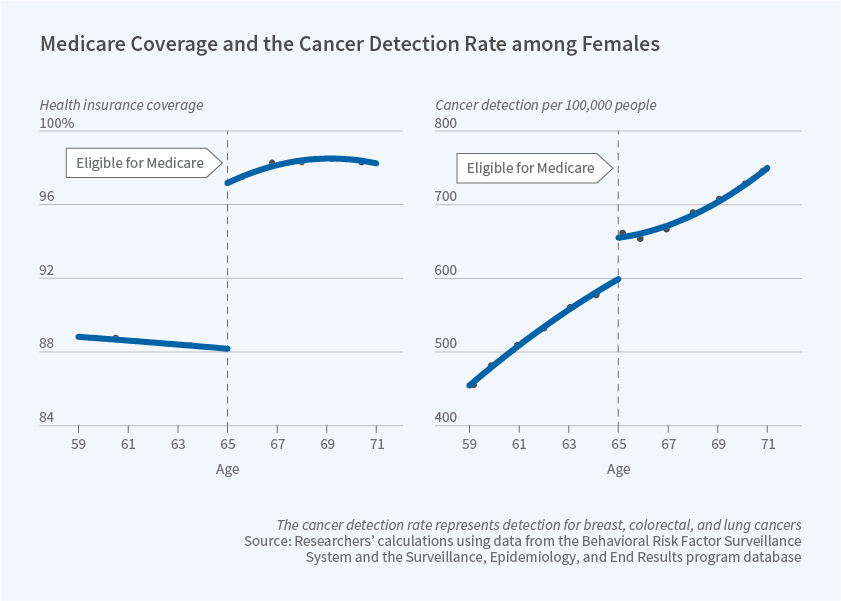 Cancer is the second-leading cause of death in the United States and, because roughly half of newly-diagnosed cancer patients are over the age of 65, Medicare plays a key role in its treatment. In Does Medicare Coverage Improve Cancer Detection and Mortality Outcomes? (NBER Working Paper 26292), researchers Rebecca Mary Myerson, Reginald Tucker-Seeley, Dana Goldman and Darius N. Lakdawalla assess the impact of Medicare eligibility at age 65 on cancer detection and outcomes.

The first panel of the figure shows — for women — the discrete change in insurance coverage that occurs at age 65. The researchers ask whether this change generates a similarly discrete change in cancer outcomes. They assume that, in the absence of the change in Medicare eligibility, rates of cancer detection and cancer mortality would increase smoothly at age 65. As a result, the researchers focus on tumor sites for which screening recommendations are consistent below and above the age of 65: these include breast, colorectal, and lung cancers.

The researchers observe racial disparities in cancer stage at diagnosis and in cancer mortality below age 65. They show that access to Medicare coverage at age 65 reduces these disparities among women. The researchers explain that "the disproportionate effect of Medicare on cancer detection and mortality among Black women may reflect the higher proportion of cancers detected at a late stage among Black women prior to age 65 and the larger impact of Medicare on health care utilization and access among racial minorities."

The discontinuous change in health insurance coverage could translate into changes in cancer outcomes for at least two reasons. First, Medicare coverage could affect access to treatment, resulting in treatment changes even for those who were diagnosed with cancer before the age of 65. Second, the earlier detection resulting from the Medicare-coverage-induced rise in screening could lead to more favorable outcomes as a result of earlier treatment.

To confirm the validity of their analysis, the researchers examine the same age patterns in Canada, where health insurance does not change discontinuously at age 65, and find no change in cancer detection or cancer mortality.

The researchers acknowledge funding from the National Institute on Aging under award 2P30AG043073 and from the Leonard D. Schaeffer Center for Health Policy and Economics. Tucker-Seeley acknowledges funding from a National Cancer Institute K01 Career Development Grant (K01 CA169041).