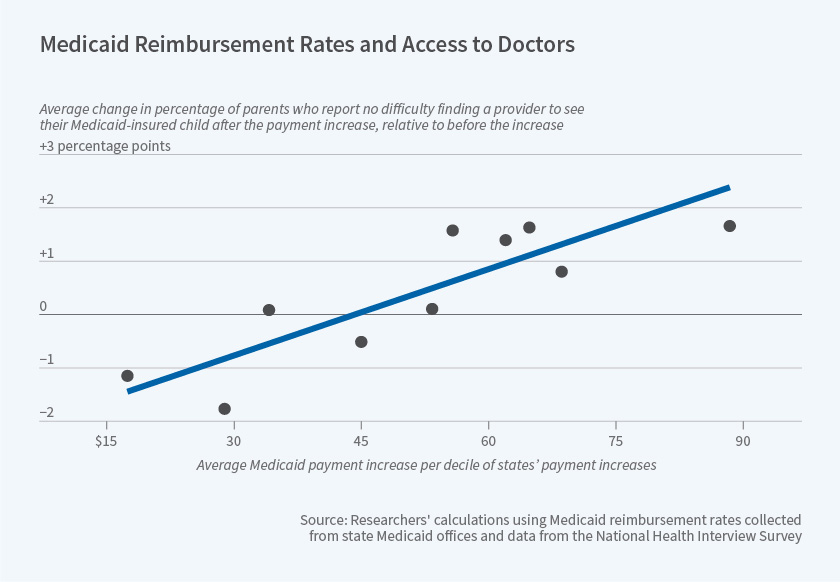 Medicaid recipients are known to experience lower access to care than privately insured patients. Potential explanations for the difficulties faced by Medicaid recipients in accessing care include their more complex medical needs, low Medicaid reimbursement rates, payment delays, or other difficulties with the Medicaid billing process. In The Impacts of Physician Payments on Patient Access, Use, and Health (NBER Working Paper 26095), researchers Diane Alexander and Molly Schnell present evidence that reimbursement rates are an important determinant of access to care, health care utilization, and health status among Medicaid recipients.

Each $10 increase in Medicaid reimbursement per visit generated a 0.3 percentage point increase in the probability that a Medicaid recipient reported a doctor visit in the past two weeks.

The researchers study this variation in the magnitude of the reimbursement rate change, using data from the National Health Interview Survey, and find that the policy change expanded access to care. The figure shows that, for every $10 increase in Medicaid reimbursement per visit, parents were 0.5 percentage points more likely to report no difficulty finding a provider for their Medicaid-insured children, a 25 percent change relative to the mean. Similarly, adult recipients were less likely to report being told that a physician was not accepting new patients or did not accept their insurance coverage.

If physicians face capacity constraints, an increase in care for Medicaid patients would imply a decline in care to other patients. However, the researchers find little evidence that Medicaid reimbursement changes had any offsetting impact on privately insured individuals, suggesting that providers had scope to increase the number of patients they saw.

Since the reimbursement mandate expired after 2015, the researchers were able to use the “reverse experiment” — when reimbursement rates reverted to their 2012 levels in most states — to validate their results.

Overall, their findings imply that changing financial incentives for providers could play an important role in improving access to care for Medicaid recipients. The researchers conclude that, when it comes to primary care office visits, “closing the gap between private insurance and Medicaid — a $45 increase in Medicaid payments for the median state — would close over two-thirds of disparities in access for adults and would eliminate such disparities among children.”

The Impacts of Physician Payments on Patient Access, Use, and Health